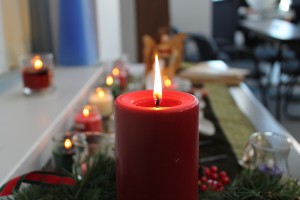 A special gift was given to First Presbyterian Church of Bloomsburg, PA, on Christmas Eve. The Peace Light, a flame taken from the grotto in Bethlehem where tradition places Jesus’ birth and then shared around the world, was an integral part of the congregation’s Saturday evening service on Dec. 24. Not only did the flame take center stage on the Christ candle of the advent wreath, it was also used to ignite the candles of everyone in the pews who gathered there that night.

“I found it personally to be a very powerful statement,” said the Rev. Dr. Elizabeth McCormick, the pastor at First Bloomsburg. “How the effort is made to spread that light, it’s pretty amazing.”

One of First Bloomsburg’s members, Christine Fuller, was a Synod of the Trinity commissioner in 2016 and a member of the Governing Commission, which gathers quarterly at the Synod’s office in Camp Hill. At its November meeting, the Peace Light was made available to the commissioners to take home with them and share with their congregations, which can use the flame to light their chancel and advent candles. Also, individuals will blow out the pilot lights in their stoves and furnaces and relight them with the flame so that the light of Jesus is continuously in their homes.

After hearing about the Peace Light from Christine, Elizabeth decided to use the flame during the Christmas Eve service. However, she did not let the congregation in on what was making a special appearance in the sanctuary until that evening.

“We kept this as a surprise for the congregation for the Christmas Eve service,” said Elizabeth, who herself was not familiar with the tradition of the Peace Light until Christine informed her about it.

An acolyte lit the advent candles at the start of the service, and when it was time to ignite the Christ candle, Christine came in with the flame in a lantern and it was used to light the final candle. Ushers eventually lit their candles with the Peace Light flame from the Christ candle and distributed it throughout the congregation. The closing benediction included the following reading:

“As the light of peace from Bethlehem on this night goes out into the world, you are now bearing that light to others in this world of darkness.”

The acolyte then proceeded to light her taper with the flame from the Christ candle before exiting the sanctuary and taking the light “out into the world.”

Christine had kept the Peace Light going in her home for nearly a month after receiving it in Camp Hill at the end of the November. She also made the one-hour, 40-minute trip from the Synod office to Bloomsburg with the Peace Light shining in her car.

Elizabeth did inform the local Bloomsburg ministerium about the Peace Light and made it available for those church leaders to use it in their worship services. Three of them did come to the church in the days leading up to Christmas weekend to take it back to their churches.

Elizabeth said First Bloomsburg will consider having the Peace Light again next year, but with Christine’s term as commissioner concluding at the end of the year, it could be a little more difficult to get the flame transported to their church. Regardless if the Peace Light makes a return to the church, it was a unique experience that was cherished by many.

“We had several who said that this was really powerful, to know that this had come all the way from Bethlehem,” Elizabeth concluded.