Presbytery of West Virginia does its part to fight world hunger 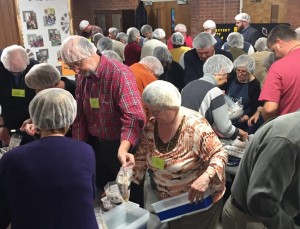 On Nov. 21, members of the Presbytery of West Virginia gathered at Teays Valley Presbyterian Church for a presbytery meeting where 34 churches were represented by 123 participants at the event. Not only did the representatives travel in to vote on presbytery matters, but they also took part in a program known as Rise Against Hunger, a non-profit with the goal of eliminating world hunger by the year 2030. The attendees packaged 15,120 meals, enough to feed 70 children for 220 days, according to Rise Against Hunger.

“We had an average number of people here,” said Troy Henson, the Community Engagement Manager for the Lynchburg warehouse of Rise Against Hunger. “They were really fast, though.”

According to Troy, the meals packed through Rise Against Hunger are shipped to 31 countries around the world to help feed schoolchildren there.

“(In those countries), every grade a child completes increases their earning potential by 10 percent,” he said. “So, if a child makes it through fifth grade, their potential goes up by 50 percent. With this, they don’t have to worry about food so much.”

Watch a video of the spirited workers at the presbytery meeting here.

The event was coordinated by Maureen Wright, the presbytery’s stated clerk, and the Rev. Dr. Amy Parker, chair of the presbytery’s Leadership Team and Minister of Education and the Arts at Village Chapel Presbyterian Church in Charleston. 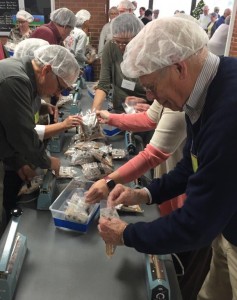 “The presbytery’s mission is to reflect Christ’s love through mission, ministry and relationships,” said Maureen, who doubles as the presbytery’s Associate for Congressional Support. “This event allowed those in attendance to deepen their relationships with one another while reaching out in mission to those around the world.”

“Everything is provided by Rise Against Hunger,” Amy explained. “That is what made this do-able, to be honest. There was some question if we should/could do something like this on our own. But to have to collect all the raw materials and then see to distribution of it all – it would have taken SO many hours. Rise Against Hunger brings in everything, all the equipment needed to package, weigh, seal and box all those packages – that is a lot of equipment. They pull up with it all in a big truck. It was unloaded and set up within an hour.”

The Rise Against Hunger truck unloaded one pallet of meal packets, which included things like rice, soy and vitamins. The truck was driven from Roanoke, VA, that morning and returned there later in the day after the 15,000 meals were loaded.

The packing did cost money. The presbytery paid nearly $5,600 to participate in the program (37 cents/meal), which was covered by a grant from the Centsability Offering, the worship offering received at the meeting and some very generous anonymous donations.

“You’re paying to feed hungry people,” Amy explained. “You’re buying the food, the equipment, the delivery, the distribution. You’re providing volunteer labor to package it. Think how much it would cost for a team to go to Haiti with that much food!”

Because this was a bit of an out-of-the-ordinary event for a presbytery meeting, Amy admitted she wasn’t sure how it would go over. But she was pleased with how everyone rolled up their sleeves and quickly got involved.

“I was a little surprised how much people were in the spirit of getting it done quickly and enjoying themselves,” she said. “There was a great spirit of cooperation, urgency, a little competitiveness and great fun. It seemed to me to be an overwhelmingly positive event. Everyone was energized and feeling like they had accomplished something significant. Space was tight, so cooperation and good humor were important.” 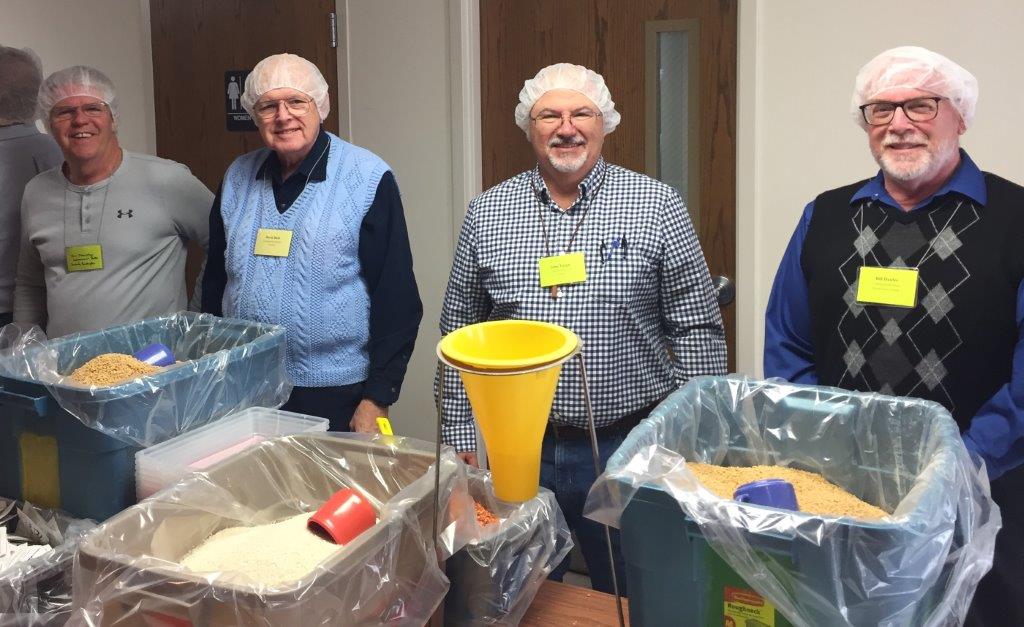