Putting together various funding pieces for a new day 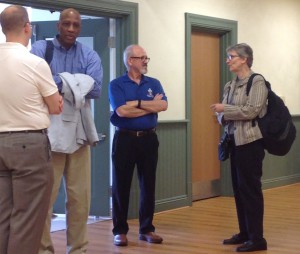 PCUSA Stated Clerk J. Herbert Nelson (holding coat) chats with a few of the people who gathered in Zelienople in early June to hear his thoughts on the proposed denominational per capita increase.

Putting together the puzzle of numbers needed for being a connectional church today and in the years to come for the Presbyterian Church (U.S.A). That’s what’s behind the denomination’s per capita numbers, which in 2019 and 2020 will increase if a proposed recommendation is passed at General Assembly in St. Louis in June. This hot-button topic was at the center of a discussion in early June at Calvin Presbyterian Church in Zelienople, PA, where a cross-section of Presbyterians from western Pennsylvania and northeast Ohio gathered for a regional meeting of mid council staff, pastors and laity gathered.

There were 20-plus people in attendance who raised questions related to per capita apportionment for members of the PCUSA. J. Herbert and Tricia Dykers Koenig, associate director of Mid Council Relations, provided a sharing time for folks to ask their questions directly related to per capita and speak to some of the overall funding issues being faced by the PCUSA today. 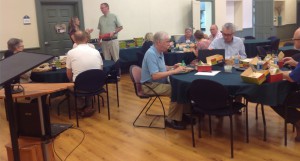 Calvin Presbyterian Church in Zelienople, PA, was the site of a conversation about proposed changes to the per capita rate in PCUSA congregations in 2019 and 2020.

Herbert then presented a contextual history for the reason behind per capita, which created a level playing field for giving, having a voice and a vote at General Assembly meetings and in being part of a connectional Presbyterian Church no matter what size congregation. He also delved into the loss of membership no longer being about churches pulling out of the denomination, but a new study shows that at the local church level we are not evangelizing. (Read about it here.) He used the UCC denomination being more inclusive and a mainline church starting to show an increase in membership as an example. The connectional nature of all Presbyterians having representation has been lost over the last 30-plus years, J. Herbert said. He added that the complexities of turning church giving and membership around is a major challenge.

A challenge to the stated clerk’s representation remarks was posed from the Rev. Ted Martin (Pittsburgh Presbytery) about how equal representation wasn’t always the case when in the ’70s a liberal national church had deft ears to more conservative churches theologically. So, a tactic used by liberals in the ’60s of protest and boycotts became more and more common practice by conservative churches to withhold some or all of their per capita from various or all levels of what is referred to today as mid councils (presbyteries, synods and GA). For a number of pastors, it has been a real struggle to keep the church they serve in the PCUSA.

Nelson responded that a more corporate-managed church at the time may not have had much appreciation for the ecclesiastical side of being Presbyterian. He said our Presbyterian heritage shows that our church has a broad capacity for many different theological viewpoints to exist together centered in Jesus Christ. He added that our need is to move forward into being the church in the 21st century by becoming less corporate and more of a movement to capture the imaginations of people for a new day in being part of a diverse church where Jesus Christ is the focus.

Herbert used a number of personal stories from his life experiences of being a lifelong Presbyterian steeped in this tradition through generations of his ancestors being pastors who were involved in the church to illustrate his deep commitment of being called to help lead the PCUSA at this time of new opportunities.