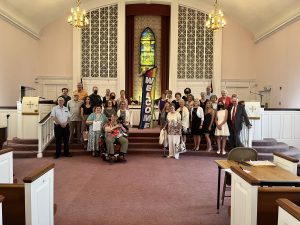 The church family at Church of Christ Uniting in Kingston, PA, gathers the day it voted to become a Reconciling Congregation.

“You have searched me, Lord, and you know me… For you created my inmost being; you knit me together in my mother’s womb. I praise you because I am fearfully and wonderfully made; your works are wonderful, I know that full well. My frame was not hidden from you when I was made in the secret place, when I was woven together in the depths of the earth.”

In 1972, flooding from Hurricane Agnes in the Wilkes-Barre, PA, area brought Kingston Presbyterian Church and First United Methodist Church of Kingston together when both of their buildings were damaged by the raging waters. Less than a year later, these neighboring congregations voted unanimously to merge into one worshiping body, renaming themselves Church of Christ Uniting (COCU) while remaining affiliated with both the Presbyterian Church (U.S.A.) and United Methodist denominations of their lineage.

Fast forward 50 years and this unique marriage continues to flourish in this northeastern Pennsylvania community. However, with the Presbyterian denomination taking a more liberal stance regarding the LGBTQIA+ community than its Methodist counterparts in recent years, it leaves COCU in a tough situation when discussions on social issues arise. Unlike in the PCUSA, the United Methodist denomination does not allow for ordinations of LGBTQIA+ people, and with the Rev. Jane Pykus being a United Methodist pastor, she is not permitted to officiate same-sex marriages.

Wanting to be an open and inclusive congregation, COCU has taken steps to make known that everyone is welcome there. In May, it passed a resolution to become a Reconciling Congregation. In part, the statement says, “equipping and mobilizing United Methodists of all sexual orientations and gender identities to resist evil, injustice and oppression in whatever forms they present themselves.” COCU is the third congregation in the United Methodist Susquehanna Conference and the first congregation (out of approximately 107) in the Scranton Wilkes-Barre District to become a Reconciling Ministries congregation.

“We live in a diverse area with people of various nationalities, colors, religions, economic backgrounds and gender identities,” Pastor Jane said. “We felt it was important to get the message out there that all means all. Everybody is welcome here. It’s a part of our mission statement that everyone is welcome here. We are currently working to clarify our mission statement to include people of every gender identity, gender expression and sexual orientation.”

Because LGBTQIA+ people are not specifically mentioned in COCU’s mission statement, Pastor Jane and COCU’s Reconciling Ministries Team felt the need to go that extra step to make sure the people in those social groups know that they are welcome.

“Some people have asked, ‘I thought we were welcoming of all people,” Pastor Jane said. “‘Why become a Reconciling Ministries Congregation?’ We wanted to move forward in becoming a Reconciling Congregation because several LGBTQIA+ community members have mentioned over the years that many churches say they are welcoming, but when they get to the church, they don’t feel welcome.

“We want to get the word out that we are truly welcoming of all people, so everybody knows no matter what nationality, religion, gender, color economic or ethnic background – whoever you may be – you’re welcome to worship with us and participate in our church ministry.” 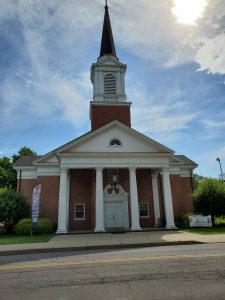 Banners outside the Church of Christ Uniting building signify the church’s openness to all social groups.

Colorful flags outside of the church welcoming all genders and social groups are now a staple at COCU. The church also had an information table at the Luzerne County PrideFest parade and celebration, with one passerby remarking that they were happy to see a church at the event. A handful of new people have inquired about the church and visited on a Sunday morning since COCU became a Reconciling Congregation.

“It was not a unanimous vote of our membership to become a Reconciling Congregation,” Pastor Jane said. “We respect those who in good conscious voted no and are grateful that they are a part of our community of faith. They, too, are a part of the ‘all.’”

Discussions on becoming a Reconciling Congregation began eight years ago, but talks stalled due to some health issues of core team members. However, the momentum gained from those initial conversations helped keep the embers hot until talks eventually resumed a few years later.

“A core group of members decided to meet and research becoming a Reconciling Congregation, which although would not change the polity of the UMC at this time, would announce that this congregation is in support of full inclusion of all gender identities, sexual orientations and gender expressions,” recalled Donna Dickinson, one of the original organizers of the movement at COCU. “We would affiliate the national Reconciling Ministry Network – ‘As followers of Jesus Christ, we commit ourselves to the pursuit of justice and pledge to stand in solidarity with all who are marginalized and oppressed…’”

In 2019, interest was reborn with Donna reopening the conversations. A survey revealed that 78 percent of the responders were in favor of becoming a Reconciling Congregation. The pandemic again halted progress on this until the fall of 2021 when COCU restarted its push and brought in speakers that helped educate the congregation on its intentions.

“Most of our concerns were about educating the congregation on loving and accepting all of God’s children regardless of labels we put on people,” said Peg Knapich, an organizer of the church’s movement. “We scheduled four speakers from our group for a Ministry Moment. We would have scheduled a voice against becoming Reconciling but couldn’t find one. We had a listening Q&A after worship. With a limited timeframe of talking with the congregation, we had to get creative with our education. Our speakers during worship spoke on their desire for the church moving forward.”

In 2024, the General Conference of the United Methodist Church will next gather, and at that time a vote on these pressing social issues will most likely occur. Until then (and beyond), the Church of Christ Uniting will continue to be an open and welcoming congregation as it moves forward to serve its community.

“The scriptures reveal to us that God created all human beings in his image and God said that we are all good,” Pastor Jane concluded. “Knowing that God has created us and loves us as we are led the way for us as a congregation to move forward and let people know that they are truly loved by God and us at COCU. Here at COCU, we give thanks for everyone’s life. Everyone’s life matters, is valuable and worthy of a place in the life of the church.”