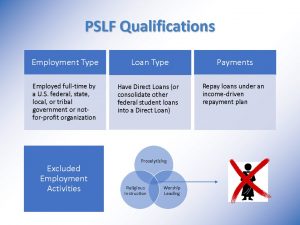 When Melonee Tubb graduated from Asbury Theological Seminary in Kentucky with a Masters of Divinity degree, she was saddled with $85,000 in student loans. That was eight and a half years ago, and every month since she received her diploma she has faithfully paid her monthly installments with the goal of one day seeing her debt erased. Unfortunately, the exact opposite has happened as her student loan debt has actually increased over time to the point that her debt is now $100,000.

That’s right: after eight and a half years of on-time monthly payments Melonee’s student debt has not gone down one penny but has in fact increased by $15,000. It’s a vicious cycle that Melonee and countless other graduates are facing these days due to the high costs associated with receiving a college education and the ways in which students have to find funding to pay them.

“When you’re 21 years old, there’s not a lot of practical experience in what it actually means to have debt,” Melonee said. “So you make that decision at 21 and do what you feel God is calling you to do and then you’re suffering the consequences of that for the rest of your life.”

However, thanks to some new policies in place, there is some relief in sight. And Melonee is trying to get the word out to those with large student debt about the ways that people can receive federal assistance to lower and, in some cases, eliminate their student debt.

Melonee is a Financial Aid for Service associate with the Presbyterian Mission Agency who specializes in counseling pastors on managing student debt. The impact student loans are having on pastors and others is overwhelming. 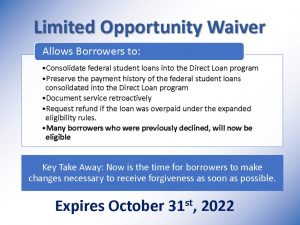 “It’s one of the most devastating things to realize that you went to seminary because you were called to go to seminary and now you’re stuck with this debt that you didn’t understand and you’re not going to be able to do the thing that God has called you to do. You’re going to have to make choices about whether you can even serve in a church or what kind of employment you can get.”

The average graduate leaves college with $40,000 in student debt. Of course, some have less then that to repay while others have much more.

“Seminary has gotten more affordable, but there was a time – and a lot of our pastors are still living this as they’ve held this debt for 10 or 20 years – where pastors were going to school with the idea that they would get this debt and pay it off. Then they left with way more than they could actually handle. For pastors who were working in small churches, for pastors who were doing New Worshiping Communities, even if they were at the average of $40,000, so many of them can’t afford the monthly payments so they end up being in an income-driven plan, which then makes their balance actually go up over time.”

Because people were coming out of school with loans they couldn’t afford, the Public Service Loan Forgiveness agency was created to assist graduates with these payment issues. However, PSLF did not include pastors because it wasn’t considered “qualifying work” for the program. On July 1, 2021, that changed when clergy and religious workers became eligible for the plan, which is now counting back service as well. It has created new hope for pastors and other church staff drowning in student debt.

“I have seen a pastor who is also serving as a campus minister got $50,000 forgiven immediately because she’s been serving a church for 10 years,” Melonee said.

To be eligible for PSLF, a person must have been paying off their student loans for 10 years. However, there was a 98-percent decline rate for first-time applicants when they reached that 10-year mark, making it both exhausting and demoralizing to be turned down for the financial assistance. A Limited Opportunity Waiver has now been added to the process that allows graduates to correct any mistakes in their application that prevented them from qualifying for the funding, thus speeding up the timeline for acceptance.

“The population I really want to get this out to is church staff and people who are doing a collection of jobs,” Melonee said. “They can go back in and change their payment plan, consolidate, do all of the things that they need to do and then count all of their time they have been in service up until now.” 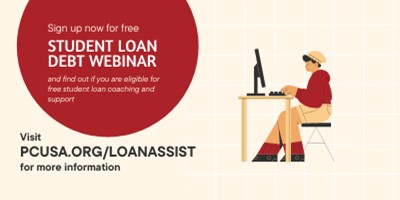 Melonee strongly suggests that Presbyterian Church (U.S.A.) pastors and church staff who are looking to apply for the PSLF loan forgiveness plan should sign up for a PMA webinar and free coaching, which includes document production.

“They’ll send in the paperwork for you, keep up with it and do the following up,” Melonee said of the coaching program. “It’s hands-on document processing on behalf of the person.”

The cost of the coaching is covered by the Board of Pensions if the person is enrolled in the Pastors Participation Plan. (People can sign up for the free coaching through PMA at the link above or the BoP, the latter of which is available by clicking here.)

To be eligible for the PSLF plan, a person must have been paying off their student loans for 10 years and meet three guidelines, which are:

The process to have the above changes accomplished, if needed, can take six weeks or longer, so Melonee is urging pastors and church staff to begin the process immediately. They will need to be completed to file the Limited Opportunity Waiver, which is due no later than Oct. 31, 2022. On Nov. 1, pastors and church staff will not be able to count previous time served as part of the application process, meaning they’ll have to pay for another 10 years before getting loan forgiveness.

Time is clearly of the essence for pastors and church staff looking to free themselves of a weighty student loan debt that may be affecting their lifestyle.

“If we’re talking about wanting to support small churches and we’re talking about wanting to find leadership in roles that are different, creative and trying to find creative funding sources – all of these that we’re moving into in this denomination in this country – having pastors who have more financial flexibility is going to be a huge deal for finding people to take those risks,” Melonee said. “If there’s a way to help people get free from their debt and be able to move into the work that they are called to do, it makes me really excited.” 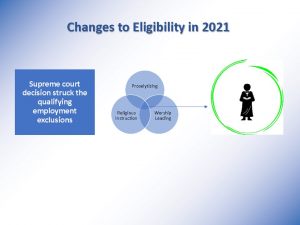