by Susan Faye Wonderland
Transitional Executive
Synod of the Trinity 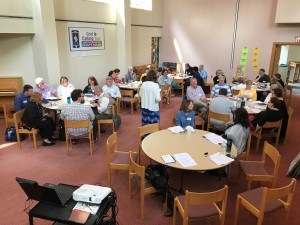 The East Region gathers at the First Presbyterian Church of Allentown, PA.

By grace, the Synod staff became involved with the Community Responders Network last spring to support them in getting three reader’s theater-style skits around bias into video production.

By grace, we met Ann Van Dyke, the writer of those skits, and as we got to know her, we learned of her work in civil rights for the state of Pennsylvania for many years.

Out of her personal calling, Ann offered to do some work with us (whatever “us” meant!) around hate.

By grace, Synod leadership said “yes,” and we started a journey that included what we already knew about incivility, racism and bias, but that landed hard and clearly on the issue of hate.

And we learned – and the Synod Assembly learned – that we knew very, very little about this reality in our culture. And without knowing much, we had not put time into considering, and then acting, on what it means to respond as Christians to hate, and what that response looks like.

And then the Tree of Life shootings “happened” in our backyard.

And we became aware that this horrific incident, though by far the worst, was not alone in our region. Far from it. It would seem the behavior that many might think is being perpetrated by a fringe, is far closer to us than we want to know. Ann’s voice calling faithful people to “speak up” to hate behavior and hate groups rang loudly in our ears. 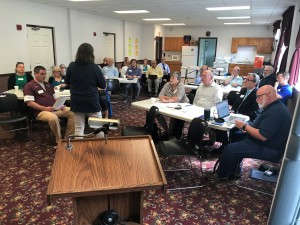 Jumonville Christian Camp and Retreat Center in Hopwood, PA, was the site of the Southwest Regional meeting.

And so, at the Regional Gatherings this spring, we took a deeper dive – and for many it was a first dive – into the realities of hate that pervade the culture of this country in an increasingly alarming way. And we learned from the beginning that our silence — what many of us would see as an appropriate non-participation in “hate” — actually opens the door for it to emerge!

How shall we then live? Or to be simplistically clear: What Would Jesus Do? (or better yet: have us do?)

That is the question: How do we respond as people of faith, as followers of Christ, when hate rears its head in our backyards? How do we lead proactively before the Klan or the Proud Boys appear, or before THAT table at coffee hour is snickering at several off-color jokes about the “them” in our community, discussing why “they” are creating community problems that were never here before? Even when those snickers represent nervous laughter, folks aren’t indicating their “no” to the jokes or conversation.

We began our work at the regional gatherings with several forms of outside voices. Staff knew that we were learning as much as anyone, and that our role with this topic was more about facilitating and helping to integrate learning than it was in teaching. And so, we began in scripture using I John 4:20 (“Whoever claims to love God yet hates a brother or sister is a liar“) and then moved on to include several documentaries that were eye- and heart-opening.

Click here for a resource page with links to the videos and materials used at the meetings.

Ann Van Dyke joined us “live” at each site, whether through Zoom or by coming to be with us, and Jim Nolan from West Virginia University developed a brief video that gave us insight into who folks are who participate in “hate.” The quiet indictment of Jim’s work was to name those folks who allow hate to happen even when it is happening right under their noses!

In the afternoon we offered several targeted conversations that were designed to give us a start at integrating what we were learning and a chance to consider where we might go. 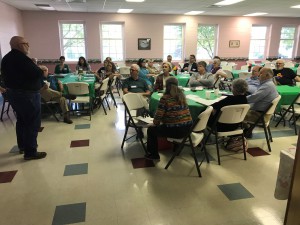 The gathering for the Central Region occurred at Highland United Presbyterian Church in Newport, PA.

It is clear our task is far from over, and the call is loud. What we know is that facing and naming hate is our concern as Christians as we “seek the welfare of the city where I have sent you” (Jeremiah 29:7). It certainly is an issue for the common good! But as well, without question, the brokenness exhibited around hate must meet and potentially find forgiveness and healing through the challenge, grace and love of Christ.

As I seek to find my place and voice in this conversation and in subsequent actions, there are two areas where I am seeking to do and be more:

First, I am convicted by the very true reality that hate groups are gathering in younger people, as gangs do, by giving them a place to belong. As perverse as it may be, the lost vulnerable and young among us are being targeted, given identity purpose and “care” through some of these groups. Young men are particular targets.

I understand the ecclesia of Christ to be about belonging, identity, purpose and care. Yet we either aren’t reaching folks broadly enough or fast enough. And I think we may still be waiting for these vulnerable to come through our doors. And that may never happen — at least first. Where do I/we need to be? What do I/we need to do to share a healthy place for belonging rather than one that leads at least to the death of the spirit if not the death of the body? How do I /we need to change in our understanding of faith community to be a place that is welcoming to them?

Secondly, I am guilty of not responding well or even at all when I hear conversation, joke-telling, innuendo or gross assumptions about others that are a form of hateful speaking. I am not quick on the uptake at times to realize what I have heard, and I find myself tongue-tied. I am learning, and I am practicing, responses that might lead to conversation. Still, naming hurtful hateful speak that can be all-too-acceptable in parts of my day-to-day world is a growing edge for me, and may need to be for all of us.

As we look ahead to “what’s next” around this issue of hate, we are appreciative of all those who have responded and said “yes!” and “thank you for this work.” It will be up to us together, and with others in our communities, to keep this concern out front where it belongs as we continue in Christ’s kingdom work! 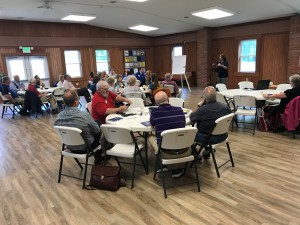 The Synod’s regional meetings kicked off at Crestfield Camp and Conference Center in Slippery Rock, PA.