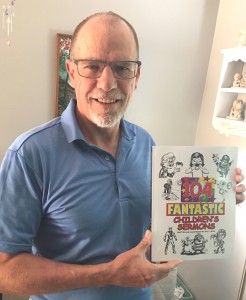 Joe Ellis has gone from “Marathon Man” to “Penning Preacher.” The pastor at both Colerain Presbyterian Church in Colerain, OH, and nearby Scotch Ridge Presbyterian Church in Martins Ferry recently completed his 13th book. His latest publication, titled “104 Fantastic Children’s Sermons,” is a resource for pastors who may have trouble finding a message to deliver to the toddlers and elementary school children on a Sunday morning.

“Pastors are always going on-line looking for children’s sermons,” Joe said. “A lot of pastors have a hard time getting children’s sermons and they need help to get to the kids’ level and tell stories that the kids can relate to. So, I thought it would be a good book.”

Joe, a commissioned lay pastor who also completed the Boston Marathon in 2015 that served as a fundraiser for the Upper Ohio Valley Presbytery to support the presbytery’s mission partnership in Malawi, Africa, finished the book in late May. He estimates that he is selling a couple of copies a week but anticipates that the sales will increase in the fall when pastors reinstate children’s sermons as part of their worship services.

Not only did Joe write the book, he also illustrated it. Because he was an art major in college and taught art and graphic design at the high-school level, it makes this part of the process easier and more cost-effective for Joe, whose selling the books for $5.99 for electronic reading and $14.99 for hard-cover books on Amazon.

“God’s given me all the tools to put together this children’s sermon book and illustrate it,” he said.

One example of a story that can be found in the children’s sermon book is titled “The Dark Cave.” It features a young boy who is upset after a bad day at school and wonders into the woods where he gets lost in a cave after his flashlight goes out. He prays for safety and a way back home, and soon is able to follow the sound of a church bell back to his home. 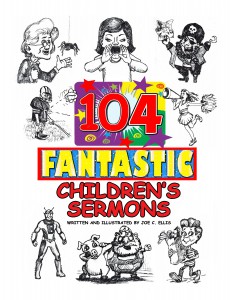 The 240-page book, which was originally targeted to have 100 stories before Joe realized he had double-numbered a few places along the way and ended up with four more than originally planned, is also ideal for parents whose nightly routine includes bedtime stories.

With a book hot off the presses, Joe isn’t letting the ink dry on his pen as he has already started on his next project – a children’s activity Bible for ages 5-12 that will include 50 stories from both the Old and New Testaments.

“It covers all of the basics of the Bible,” he said. “It’s going to have an activity with every story that will help the kids to apply the principles of scripture.

“I wanted to write a book that would give kids a more complete understanding of the Bible from beginning to end, from Genesis to Revelation, and how it builds – from the creation story to Adam and Eve and the fall of man to the promise of a blessing for the whole earth through the Israelites to the predictions of the coming of the Christ. It’s so the kids understand that it’s not just a bunch of stories; it’s held together by one theme, which is the coming of the Messiah.”

Joe has also authored “What Child Is This?”, a guide for Christmas Eve services that is written like a play.

“It takes all the scripture readings that are usually done on Christmas Eve and it (highlights) each character in the Christmas story,” he explained. “The character tells a little story, reads a scripture, tells his or her story, and then a Christmas hymn is sung. It goes through all of the prophecies and the story of the nativity.”

Joe wrote his first book in 2001, “The Healing Place.” It’s a Christian suspense novel that takes place in and around Scotch Ridge and Martins Ferry.

“It’s based on my ministry at Scotch Ridge Presbyterian Church,” he said. “I just published it to see if people would be interested in the book. I had about 700 copies made, and they all sold out. So, I decided to write a series.”

That led to Joe’s fictional murder mystery books that take place in the Outer Banks, NC. The first book in that series, “Murder at Whalehead,” has sold about 10,000 copies, Joe says, making him a bit of a celebrity in that vacation destination when he annually comes to town with his family for rest and relaxation. There are now five books in that series, with the latest “The Treasure of Portsmouth Island” being published earlier this year.

“I enjoy writing mysteries,” he said. “The reason I’ve written so many of the mystery books is because the bookstores down at the Outer Banks, they want me to keep putting them out. I go down in the summer and do signings for them.”

Joe begins his day by writing for about an hour early each morning, prior to attending to one of the churches he serves in eastern Ohio.

“I’m very disciplined,” he said. “Slowly but surely – and this has been for over 20 years – books get written.”

It’s a passion and love for a hobby that Joe has been able to act on and turn into something that is very meaningful, both for himself and those who turn the pages of the books he writes.

“I believe God give us gifts, and God sets the example of creativity,” Joe said. “He is the great creator. I think it is important for each of us to find the gifts, develop them to the highest level and use those gifts to build the kingdom.”