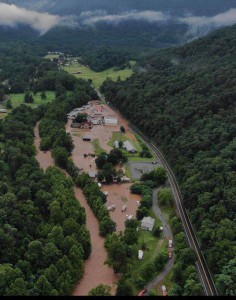 The Seneca Rocks area of West Virginia received a large amount of rain in just a few hours on June 29, resulting in flash flooding that is affecting many communities. (Photo courtesy of Van Broughton)

Several Presbyterian churches in the northeastern mountains of West Virginia are making the best of a tough situation. On Saturday night, June 29, a surprise thunderstorm dumped as much as seven inches of rain in four hours in places like Randolph County, causing flash-flooding and areas with closed roads and washed-out bridges.

Some homes were inundated with water, while accounts of buses toppling over and tractor trailers being moved by the shear volume of the water were being reported by local news organizations. In Harman, which was one of the places hit hardest by the flooding, worshipers at Harman Presbyterian Church on Sunday morning were greeted by “only” a couple inches of standing water in the basement.

“It could have been a lot worse,” said Gray Hinkle, the lay pastor at Harman Church. “We (the community of Harman) lost some homes, some camper-trailers and some bridges, but no life lost.”

Gray, who lives about seven minutes north of Harman, estimated he received 6 ½ inches of rain during the overnight hours at his house but did not suffer any damage. But that’s nothing compared to the Flood of 1985 when Hurricane Juan dumped 13 ½ inches of rain on the area in 24 hours.

While Gray was prepared to allow the Harman Church to become a center for food and clothing distribution following the most recent flooding, the local fire department and senior center have become the point of contact for such resources. Several people from the church are volunteering at those locations.

“A lot of people donated things that they thought people had lost and will be donating more,” Gray said. “This has happened before, and everybody knows how to work together to handle the situation.”

Four Presbyterian congregations in the Valley Parish – Beverly, Mill Creek and the Tygarts Valley Churches in Randolph County as well as Belington Church in Barber County – are also in the middle of the area hit hardest by the storm. Rich Cardot, who presides over all four of the congregations whose buildings sit along the Tygarts River but managed to escape damage from the flooding, is helping the four-church parish plan for the future after this latest weather event. 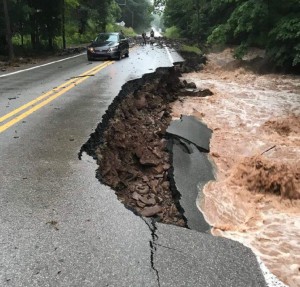 This is an all-too-common scene in Randolph County following flash flooding that dumped as much as seven inches of rain in four hours in this area. (Photo courtesy of Elkins-Randolph County Tourism)

“Two people on the (parish) council brought up the possibility of establishing a disaster response team that we as a parish would keep on call,” Rich said. “We’ll see if people in the churches would like to be part of a disaster response team. We’ll probably be more organic about it to see what grows up from the gathering rather than be too descriptive about it. I don’t know what that’s going to look like.”

As these communities in Randolph and surrounding counties continue to dry out, there’s a look to the future by many in those areas to be just a little more prepared when the next storm creates havoc on the homes, buildings and automobiles in its path.

“Our goal is to discern where it is that God is calling us to be, act and do in a situation,” Rich said. “Obviously there are needs that are crisis-oriented – trying to get in there and muck out basements and restore power and water.

“My goal is to work with this parish, these churches, and say where is it that God is calling us to be in all of this? And to try to lead them to a process of discernment to discover what that’s going to look like. First of all, they have to live with the reality that I may not personally have the answer to that, but that in conjunction with the leadership of the church and the membership of the congregations, that’s going to be something that we’re going to figure out together.

“When the waters rise, we know that they will recede, and the sun will shine again.”