McVeytown Church’s Lunar Communion Service out of this world

“One small step for a man, one giant leap for mankind.” 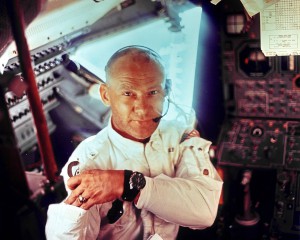 This sentence is synonymous with American history, as they are the first words spoken by a man, Neil Armstrong, on the surface of the moon. The 50th anniversary of the historic moon landing was celebrated worldwide on July 20, 2019.

But also on that day in 1969 – about eight hours earlier, shortly after Apollo 11 landed – the first liquid was poured and first food was eaten. It coincided with the reading of John 15:5 by Buzz Aldrin, who in reading the text, drinking the wine and partaking of the bread was leading the first non-earthly communion service.

“I am the vine, you are the branches,” Aldrin read silently from a piece of paper he brought with him that he wrote the scripture on. “Whoever remains in me, and I in him, will bear much fruit; for you can do nothing without me.”

Aldrin, a ruling elder at Webster Presbyterian Church located about 25 miles southeast of Houston, had received permission from, as the church was known at the time, the Presbyterian Church in the U.S. for a layman to serve himself communion. His own congregation in Webster, which at the time was known as the Church of the Astronauts because Aldrin along with John Glenn, Jerry Carr, Charlie Bassett and Roger Chaffee were also active members during their service with NASA, held a communion service during the same hour as Aldrin.

When the Rev. Dean Woodruff brought out the bread for communion at Webster, part of the loaf had been broken away because Aldrin had taken a portion of the bread with him to the moon. Every year since, on the Sunday closest to the moon landing, Webster Church holds a commemorative communion service in honor of that special day. 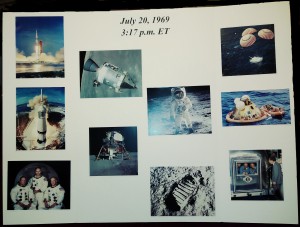 These images will be part of the celebration of the 50th anniversary of the moon landing and Buzz Aldrin’s communion service at McVeytown Presbyterian Church on July 20.

Scott Andrews, the pastor at McVeytown (PA) Presbyterian Church in Huntingdon Presbytery, grew up in the Houston area and thus always had a fondness for the American space program. So, it’s not surprising that he led a Lunar Communion Service at his church on the 50th anniversary of that famous day. The July 20 gathering was held at 4 p.m., which is around the time Aldrin held his service on the moon five decades prior.

“I had never heard the story about Buzz Aldrin taking communion to the moon until about three or four years ago,” said Scott, who actually visited Webster Presbyterian Church one Sunday when he was a young boy.

Scott created a poster board with pictures of the launch, the moon landing and splashdown that was put in the narthex at McVeytown Church to help set the mood for the day. He had a NASA patch and a couple sample layers of a space suit that he got from a friend that were also available on display.

Hymns with a creation theme were part of the service, as well as video clips of the launch and landing. To keep everything in perspective, after the landing video, Scott led the service of communion. Nearly 50 people turned out for the service.

“I’m hoping this will be an evangelistic communion service,” Scott said prior to the event. “People just might come out of interest.

“I’ve always loved and had an interest in the whole space program,” Scott continued. “I grew up in the environment of everybody being excited about it. Basically all of the friends I had growing up, their parents worked at NASA. It was part of the culture growing up.” 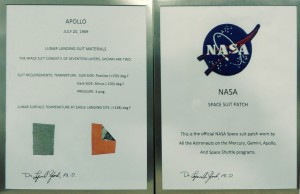 Thanks to a friend, Scott Andrews will have samples of a space suit and a NASA patch on display during McVeytown Church’s Lunar Communion Service.

On the day of the moon landing in 1969, the Apollo 11 lunar module, the Eagle, landed at 3:17 p.m., but it wasn’t until nearly eight hours later at 10:56 p.m. that Neil Armstrong took his famous first steps on the surface. During that down time, with fellow astronaut Pete Collins up in the command module orbiting the moon, Aldrin and Armstrong had time to themselves to rest and get ready for their walk. Aldrin radioed back to Houston this message shortly after touchdown:

“I would like to request a few moments of silence,” Aldrin said. “I would like to invite each person listening in, wherever and whomever he may be, to contemplate for a moment the events of the past few hours and to give thanks in his own individual way.”

That’s when Aldrin led his solo communion service. Armstrong, a deist (the belief that God has created the universe but remains apart from it and permits his creation to administer itself through natural laws), did not join Aldrin in taking communion, though he respectfully observed while Aldrin took the elements.

“NASA did not make a huge deal of it,” Scott said of the event. “They didn’t really keep it private or secret, they just didn’t publish it. NASA had been sued a few years earlier by Madalyn Murray O’Hair because on Apollo 8, when the astronauts orbited the moon for the first time and they came around and saw the Earth rise, they read from Genesis. It was on the news. You could hear the astronauts doing the reading. NASA won the case, but from then on they didn’t want to cause any offense to anybody and end up in a courtroom again. They gave Buzz permission to do this, but it was not broadcast over the radio.”

Aldrin later described the moment he took communion on the moon for Guideposts magazine. 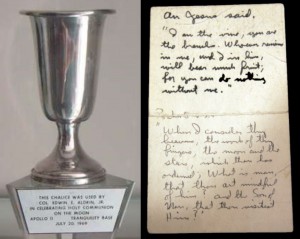 The chalice Buzz Aldrin used and note he read during his communion service on the moon on July 20, 1969.

“I poured the wine into the chalice our church had given me,” he wrote. “In the one-sixth gravity of the moon the wine curled slowly and gracefully up the side of the cup. It was interesting to think that the very first liquid ever poured on the moon, and the first food eaten there, were communion elements.

“And so, just before I partook of the elements, I read the words, which I had chosen to indicate our trust that as man probes into space we are in fact acting in Christ.”

Scott has similar passions of religion and space exploration as Aldrin, which makes what he organized on the 50th anniversary of what many call the greatest achievement of a lifetime something special.

“I think the moon is such a fascinating thing,” Scott said. “It’s a gift from God because it has so much to do with life on the planet. Its own gravity, it makes the cycles of life possible. So much of our human knowledge came from the very fact that the moon was even there. I think, just in human knowledge, the moon has been a wonderful gift from God.”