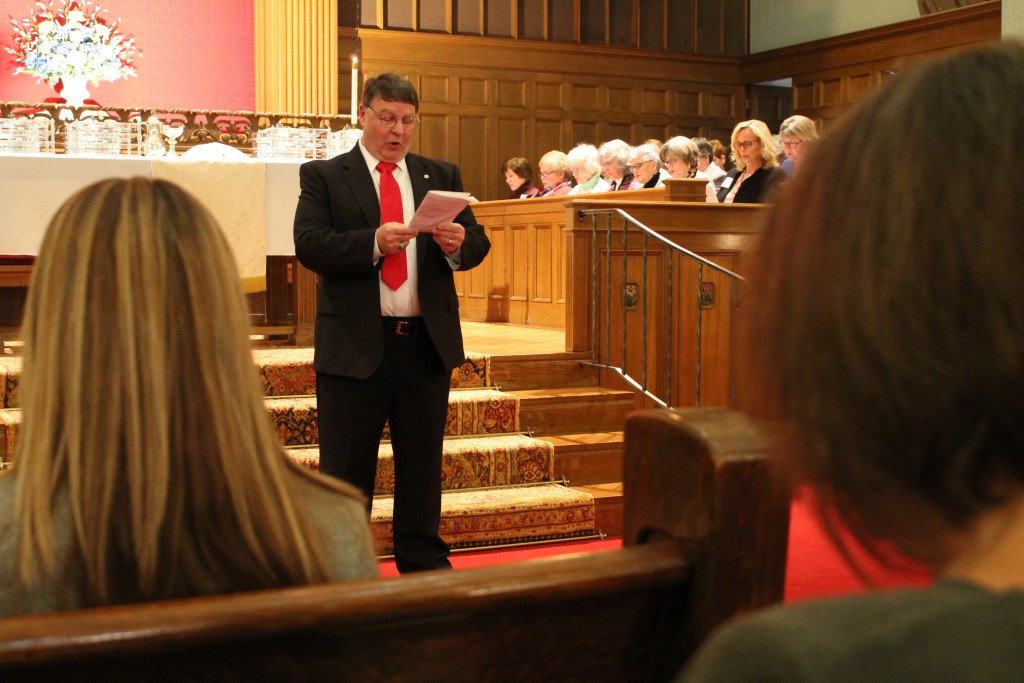 The Rev. Dr. Bill Knudsen leads a responsive reading during the Presbytery of Northumberland’s stated meeting that also served as the executive presbyter’s retirement ceremony.

To say that the Rev. Dr. Bill Knudsen took the path he thought he would or ended up where he planned couldn’t be further from the truth. After all, he had visions of joining the Navy as a chaplain and had little interest in a job opportunity as the executive presbyter at the Presbytery of Northumberland. However, God had different plans for Bill, and 14 years after accepting the call at Northumberland, which followed a 20-year career in the Army Reserves, Bill is retiring.

“It’s the right time to do it,” Bill said when asked about retirement. “I want to retire while I’m young enough to be able to still go out and enjoy life. I’m 67 years old and it gives me a lot more opportunity to settle into a new area, make new friends and still be young enough, active enough and healthy enough to enjoy retirement.”

Bill and his wife, Gloria, are heading for a warmer climate in retirement and will reside in the Houston area where Gloria has roots. Officially, Bill’s final day at the Presbytery of Northumberland as executive presbyter and stated clerk is April 30. However, he concluded his office hours in late March and was honored with a retirement celebration March 18 at the presbytery’s stated meeting at Covenant Central Presbyterian Church in Williamsport, PA.

“He and Gloria have been a wonderful match for this central Pennsylvania landscape and its central Pennsylvania Presbyterian congregations,” said the Rev. Susan Wonderland, the transitional executive for the Synod of the Trinity, during worship at the presbytery meeting. “You (the Northumberland churches) have grown together through snow, gas drilling, changing congregations, changing culture, denominational struggles, celebrations, Little League championship games and the re-doing of the part of town that is along the highway. You have spent time together and made memories together.”

One of Bill’s final acts as executive presbyter was to designate the offering at the presbytery meeting to go to Gene Joiner, the executive director at Krisland Camp and Conference Center. Gene is in the process of adopting a teenage boy from the Ukraine, a situation Bill is very familiar with considering he and his three siblings were all adopted.

“The first thing I did was call the Chief of Chaplains office in Washington D.C. and said, ‘Hey, God’s calling me to be a chaplain. What do I need to do?’” Bill recalled. 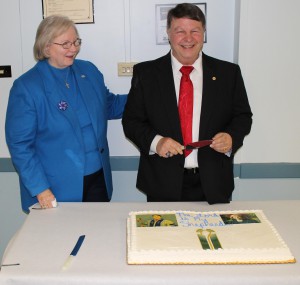 Gloria and Bill Knudsen get ready to cut a retirement cake at Covenant Central Presbyterian Church in Williamsport, PA.

After four years of college at Point Loma Nazarene University (formerly Pasadena College) and three years at Nazarene Theological Seminary, Bill answered a call near Atlantic City, NJ. While in seminary, Bill contacted the Navy and was told that the quota for Chaplains was already filled. The Navy suggested he call the Army. The Army welcomed Bill and he was commissioned a second lieutenant as a chaplain candidate.

Bill’s church in New Jersey happened to be located near an Army Reserve battalion. Wanting badly to serve a branch of the military, Bill walked in the barracks door and said, “Do you guys need a chaplain?” They quickly accepted Bill’s offer and the 78th Division chaplain assigned him to four nearby battalions where he served for a couple of years.

A call to active duty came some time later, moving him to Colorado for a stay before eventually accepting a three-year call in Germany. He was released from that post in 1990 on, ironically, the same day that the United States invaded Kuwait.

Bill’s time in the military was exactly what he expected: working with young soldiers and providing a spiritual foundation for their lives. Unknowingly, the soldiers also gave plenty back to Bill.

“It was just fabulous to see all of these 18-, 19-, 20-year-olds who are so hungry for the Good News and were so responsive to just being taken care of by somebody who really cared about them,” said Bill, who rose to the rank of major during his time in the Army. “The role of the chaplain is that they are the only officer within the battalion that is allowed to work people-to-people. The chaplain is truly a pastor to the soldier. What I experienced is that almost 100 percent of the soldiers trusted you, protected you, cared about you and did everything they could… You did everything to help them and they did the same thing to you.”

Following his military career, Bill felt another call to enter a middle governing body position in the church. Pastoring in Missouri, his name quickly spread throughout the Presbyterian Church and it was in Northumberland that he received his first invitation to interview.

“My wife and I felt like there was no way we wanted to go to Pennsylvania,” Bill said with a laugh. “We always went to Pennsylvania just to be able to have a vacation; we just really never thought that God would call us to Pennsylvania.”

Northumberland happened to be looking for an executive presbyter and invited Bill to come in for an interview. Thinking it would simply be a good experience for him to brush up on his interview skills, Bill accepted the invitation.

“I had no desire to say ‘Yes,’” Bill recalled. “I figured it wouldn’t go anywhere.”

But things did go well, and as Bill sat in the airport waiting for his flight back to Missouri, the chairperson from the Nominating Committee at Northumberland drove to the airport and told Bill that the committee had already decided that they wanted to offer him the position. After a month of prayer and discussion with Gloria, the Knudsens decided to settle in Northumberland.

“It wasn’t something I planned to do or even wanted to do,” Bill said. “I always tell people I’m a missionary to Pennsylvania from California. We’ve enjoyed it. It’s been a great match. God knew exactly what he was doing. Gloria has fallen in love with the people in this community and in this presbytery, so God knew exactly what he wanted us to do and we just had to be obedient.” 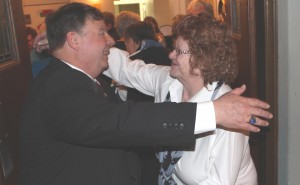 There were plenty of good-bye hugs for the Rev. Dr. Bill Knudsen at the Presbytery of Northumberland stated meeting in mid-March.

When Bill looks back on his 14 years in Northumberland, he’ll remember many things fondly. Undoubtedly one of his proudest accomplishments is the work he did with first-call pastors. Bill created a Mentoring Support Group that allowed him to work with these new ministers to help them learn the ropes. It lasted for close to six years, growing each year while also maintaining the original members who wanted to continue with the mentoring process.

Bill would make it an annual goal of his to stress to the pastors in the presbytery the importance of doing the work of an evangelist. This included properly equipping both the laity and clergy to spread the word of the Bible in all that they do. Bill is also especially proud of the work he did in “empowering the laity for ministry.”

“I had the full support of the presbytery in going out and helping to take congregations that were really in a survival mode and working with those who were called to be ruling elders, to empower them to do the ministry that God is really calling ruling elders to do,” he said. “To not just sit on the sidelines and let the pastor do it, but to give them the instructions and empowerment to do the work that God is calling them to do as spiritual leaders.”

At the March 18 stated presbytery meeting, the Rev. Steve Cureton was welcomed in as the new transitional executive presbyter and the Rev. David Smith was celebrated as the new stated clerk, a role Bill has filled for the past four years. With Steve and David now taking the reins, Bill is confident Northumberland will continue down a successful path.

Bill plans to take a year off from preaching as he and Gloria settle into their new home in Texas, but he admitted he’d like to stay active in the pulpit after that, extending his services as a supply pastor to both the presbytery there as well as to congregations in other denominations.

And when Bill’s phone does ring for the first time in Houston, chances are he won’t discard that invitation as just a chance to brush up on his interviewing skills like he did 14 years ago in Northumberland.