Sewickley pastor continues her journey in Russia with WMI

Traveling to Russia in the current political climate may not sound like the best of ideas. And to make the trip during Lent in the middle of winter may also deter plenty of people, but for the Rev. Rebecca DePoe, she couldn’t wait to set foot in this country that is shared by both Europe and Asia. 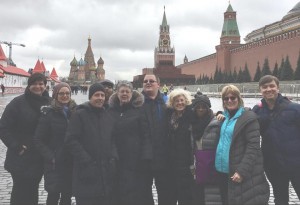 Rev. Rebecca DePoe, left, stands outside the Kremlin in Moscow with the group she traveled with from World Mission Initiative at Pittsburgh Theological Seminary.

The pastor at Mt. Nebo United Presbyterian Church in Sewickley, PA, traveled with nine other people from Pittsburgh Theological Seminary to Russia as part of a World Mission Initiative Short-Term Mission Experience. The nearly two-week journey helped her learn a new culture and strengthened her pastoral vocation, which has been shaped by this and four previous mission trip experiences.

A $500 Peacemaking Grant from the Synod of the Trinity helped cover part of Rebecca’s expenses for the trip. Funds were taken from the Andrew Murray Scholarship Fund, which is earmarked for “travel to countries of the former Soviet Union as determined by the Peacemaking Committee.” For more information on Synod Peacemaking Grants and Mission Travel Grants, click on the name.

What follows are two blog posts written by Rebecca that reflect on her experiences in Russia.

Russia, Bodies and Desiring the Kingdom

When I traveled to Russia, I learned that Orthodox Christians focus on three things during Lent: body, soul and spirit. When I was in Russia I learned a lot about these three things. Today I’m going to talk about what I learned about bodies, about my body in general, but also about the Church as the body of Christ.

So, bodies. We Presbyterians like to pretend that we don’t have bodies, that our bodies consist of our brains only. I invite you to join us for worship on Sunday if you don’t believe me. We sit for most of the service. Other Christians like to joke that the only time Presbyterians raise their hands in worship is during a Congregational Meeting. On a typical Sunday, I only log about 4,000 steps on my Fitbit.

In contrast, while in Russia I learned that the Orthodox faith is an embodied faith. There are no chairs in an Orthodox church. You stand, kneel or do prostrations the entire service. Also, women must keep their heads covered when they enter an Orthodox parish. By the end of our time in Russia, I was a head-scarf-tying pro. You have to tie it in the back if you don’t want it to slip off during prostrations.

While in Russia, I also learned that Russians are less sedentary than Americans are. When in Russia I averaged 12,000 steps (5.5 miles) a day mainly because we used public transportation everywhere we went. The Moscow Metro is just awe-inspiring. It appeals to my love of beauty and order. It is efficient and filled with cool art inspired by Russia’s history. Many Russians sleep on the metro even when their stop is only one stop away. This must be how Russians are able to log as many steps as they do a day. Metro naps.

Since returning from Russia, I’ve been reflecting on bodies. Partially because I am reading “Desiring the Kingdom: Worship, Worldview, and Cultural Formation” by James K. A. Smith in preparation for my West Branch clergy lunch next week. In his book, Smith argues that we are liturgical animals – embodied, practicing creatures whose love/desire is aimed at something ultimate.” We are not, Smith argues, primarily thinking beings, or persons defined by thinking and disembodiment – that a person is only contingently related to a body. Basically, we are what we love. Not, I think, therefore I am.

What would it look like if we Protestants were to take embodiment as seriously as the Orthodox do? Perhaps we might encourage our congregations to stand for the gospel reading? Perhaps be attentive to multiple learning styles as we prepare our sermons? Perhaps we might shift the focus in our Sunday School classes from imparting knowledge to helping people feel like they belong? Whatever we do, my trip to Russia taught me that I have to start taking bodies – my body, and the body of Christ – more seriously in my ministry.

Maybe it’s time to ask session for a standing desk?

Let me back up for a second and share with you that I am a huge history nerd. I am especially a huge history nerd about Communist Russia. It has been a lifelong dream of mine to visit Russia and see some of the places I have read about. I remember studying about the Butovo Firing Range in one of my Russian history courses at Pitt.

During Stalin’s Reign of Terror (1937-1938 more than 20,000 people were executed in Butovo. Russians refer to Butovo as Russia’s Golgotha, Golgotha being the place where Jesus suffered for the sins of the world. At Butovo, Stalin ordered the executions of political opponents, priests and foreigners. Prisoners were lined up at the edge of a pit and shot in the neck. Our tour guide told us that executioners had unlimited access to vodka at Butovo to help them remove the smell of blood from their hands.

As I pastor, one of the things I have learned is that suffering, like anger, has to go somewhere. If we cannot make meaning of our suffering, we are likely to spend our lives making other people suffer. Think of the father who was abused as a child, who grows up to abuse his own children. I am so grateful that the Orthodox Church is helping people make meaning of their suffering by turning Butovo into a memorial. That way family members and loved ones of those who died here have a place to go to pay their respects. They can pray at the mass graves, light a candle in the church, and place an icon at the foot of the peace cross.

While we don’t have mass graves in America like they do in Moscow, I think there is something for American Christians in how Orthodox Christians are trying to reckon with their history. While we can’t turn the clock back and stop the executions, studying history allows us to see what may happen to a church that allows the state to have the final say in who they are as a people. Studying history forces the church to question their own complacency in the face of sin, sins like slavery, segregation, gun violence, and mass incarceration to name a few.

I will always treasure my trip to Butovo, especially during Lent where we sit with the reality of human sin. And wait with eager longing for the promised resurrection of all of our bodies.