Not everyone has embraced the social media phase that the world has gravitated to. The Rev. Ed Rudiger is not one of those people. 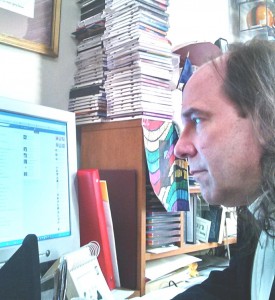 The Rev. Ed Rudiger regularly communicates with people in Africa and India about the Bible through social media.

The pastor at Cove Presbyterian Church in Weirton, WV, is very active on platforms like Facebook, Twitter, Instagram and Pinterest. He feels that these are very effective ways to deliver the Gospel to people besides standing at a pulpit on Sunday mornings. Because of his drive to reach a wider audience, Ed has connected and developed long relationships with people in places like Africa and India where he is helping to spread Jesus’ teachings.

“We started exploring using social media and the Internet to communicate the Gospel,” Ed said. “And the intention was to communicate it here in the northern panhandle of West Virginia and to initially increase attendance at worship services. All of a sudden, this interest was generated in other parts of the world.”

It all started for Ed when he was at a General Assembly meeting in San Jose in 2008. Wanting to keep track and post what he was experiencing, he created a church blog. While it was designed for his constituents to read, the blog writings – which continued when Ed returned home – were eventually discovered by people in places like Kenya.

During the last few years, the contact with people in Kenya has taken off. Ed has almost daily interactions with them through instant messaging on Facebook.

“I may have three or four conversations a day with some of our African friends and some of our friends in India,” Ed said.

Cove PC, which ironically doesn’t have its own website but has five blogs, sends out twice-daily emails that include Bible passages, sermons, a prayer line and a devotional podcast, to name a few. Cove also posts sermons and things in Bible- and Christian-related groups on Facebook, which Ed thinks is a reason he has been able to connect with some of the people he has.

“Cove has about 720 likes on its Facebook page and over 50 percent of them are African,” Ed said.

Before Ed’s Sunday sermons were podcast and available to listen to online, the sermons were emailed digitally overseas. In one case in Indonesia, his sermon was read on a weekly basis to a congregation there during its worship service.

Through those emails, Ed struck a relationship with a Nairobi man named Dancan, who Ed described as someone “who didn’t have a lot of theological training but really had a passion for hearing the Gospel.” Dancan, who calls Ed “Bishop,” soon expressed interest in having a more formal relationship with the church and even went as far as gathering a few friends to form a worship group.

“I encouraged him to connect with Kenyan churches and Kenyan denominations, but he didn’t want that,” Ed said. “He wanted an association with Cove Presbyterian Church.”

Last summer, Dancan was named an “associate member” at Cove PC, which makes him affiliated with the congregation without having any political standing. On Dancan’s Facebook page, he lists himself as a pastor at Cove PC, a testament to the influence Ed and Cove PC have had on his life.

All told, there are five associate members affiliated with Cove, all of whom have started “home churches” in and around Nairobi that each consist of roughly 20 worshipers. Cove does not support them financially, just through daily readings and sermons that help the group leaders preside over their mini-congregations.

“We have relationships with another church in Kenya and an orphanage in Uganda – purely through social media,” Ed explained. “And for all of those, we made it really clear that we just aren’t in the position to give financial support. But Dancan didn’t want financial support. He wanted guidance and direction, and that’s what we’ve been able to do, and that’s our conversation.”

In the Punjab district of India, there’s another congregation that has taken to Cove’s emails. In fact, it is in conversation with Ed on how the two congregations that are continents apart can become partner churches.

However, Ed admitted that all of the connections he has made with people on the other side of the world haven’t been completely embraced by the people at Cove PC.

“There’s been some resistance because the old idea of the church is that the church is ministered to the people here in this community,” he said. “The resistance is in terms of focus. Is this distracting me from what some folks believe should be my job, and my job is taking care of a membership of about 300 – here. That should be my exclusive job, which is the idea of church as a pastor taking care of his flock and not spreading the Gospel but maintaining the community. There are some – by no means a majority – but some who think that maybe too much time is focused on Africa. We can do both, and session supports the idea of doing both.

“What I’ve tried to tell people – and this is the way I see it – is maybe the Internet is like the Roman roads for the Apostle Paul. This is a new way to share the Gospel that people couldn’t have envisioned 30 years ago. So maybe this is God giving us the opportunity to do a new and exciting thing.”

Ed doesn’t know why his little church in the Rust Belt of West Virginia has become the focal point for these foreign ministries but believes the daily emails have a lot to do with it.

“Maybe it’s the volume. Maybe it’s the content,” he said. “I know one of the things that meant a lot to not only Dancan but the other African church we work with are the daily scripture readings we send out. It isn’t a huge deal. For me here it’s an important thing, and it seemed to mean a lot to them.”

While Ed is doing his part, he feels there is more that can still be done. He wonders how one could perform communion or baptisms through social media and is looking to find answers to those questions. It will keep him focused on continuing to build relationships around the world.

“Based on what they’re saying to us, we’re entering into community,” Ed said. “We’re sharing good news with one another and it’s really exciting. It excites me. For this little boy from eastern Virginia, this is something that was completely unexpected.”