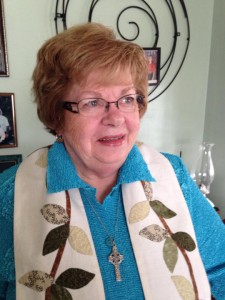 So, who is William P. Thompson, you ask?

Thompson was a historically influential leader of the Presbyterian Church for three decades. He led the Presbyterians through movements of civil rights, anti-Vietnam War and women’s and gay rights from the 1960s to 1980s. He was the moderator of the General Assembly in 1965 and a year later became the stated clerk of the “northern stream” of Presbyterianism. With his southern branch counterpart, James Andrews, Thompson pushed hard for a reunion of the two sides. Finally in 1983, the reunion happened. Thompson and Andrews were named co-stated clerks for one year before Andrews beat him out as the first stated clerk of the new Presbyterian Church (U.S.A.). Thompson retired shortly thereafter.

“Thompson, as I understand it, was a real mover and shaker in terms of unity,” said Craig Kephart, the Executive Presbyter of Washington Presbytery. “He wanted to see the northern and southern churches just reconnect. Some of the irony is that when it happened, he was defeated in the election.”

In retirement, Thompson, who died in 2006, lived near a pastor who now resides in Washington Presbytery. The pastor, who does not wish to be named, and Thompson became friends. From time to time, the two would share a cold iced tea on Thompson’s porch and talk about many things, including the Presbyterian church.

“Our pastor remembers being particularly touched by the old gentleman’s genial welcoming nature,” Craig explained. “He was not part of the congregation that this young pastor was serving but the youngster knew of the old guy and had occasion to be introduced to him and then had occasion to stop by the house for a visit.” 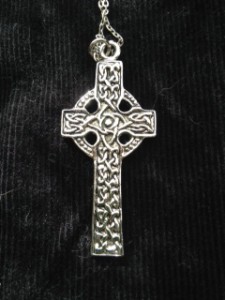 One day, Thompson gave this pastor the cross necklace. It meant a lot to the young pastor and years later he wanted to make sure this precious gift could be enjoyed by others.

“It sat in a drawer for a long, long time,” Craig said. “Well now, the young pastor is one of our oldest pastors. He was downsizing his own library and belongings and asked me about it. That sort of gave birth to this idea.”

The cross necklace, along with a gavel and banner to be hung in the moderator’s church, was presented to Nellie by Synod of the Trinity Transitional Executive Susan Faye Wonderland during Washington Presbytery’s meeting in January.

“If you’re familiar with the history, the name William Thompson means something to folks,” Craig said. “It seemed like a neat tradition to get started. I suppose with each generation of moderator it’ll mean less.”

Nellie is not one of those people. She is honored to have such a gift and will wear it with great pride.

“William P. Thompson was tireless in his work to unify the Presbyterian Church (U.S.A.),” she said. “I personally look at this cross as a symbol of unity and am very proud of being part of initiating the tradition of a ‘Moderator’s Cross’ in the Washington Presbytery.”