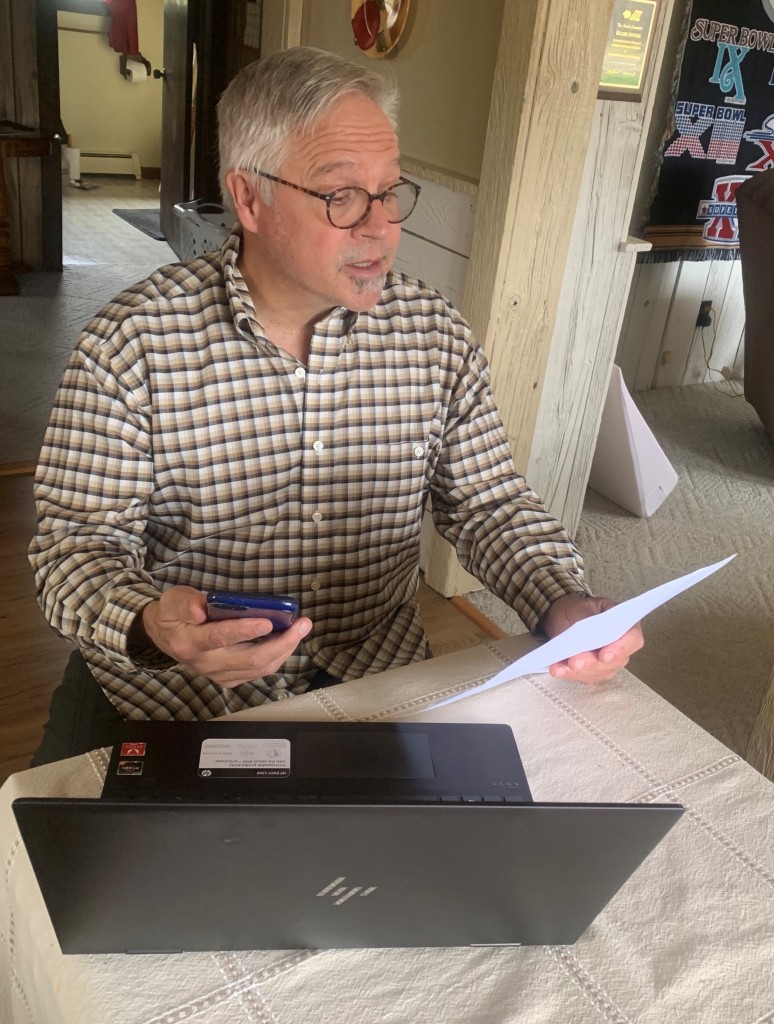 Lay pastor Roger Snyder records his weekly message that will be sent out by robocall to the Endeavor Presbyterian Church congregation on Sunday morning. This has proved to be a valuable tool for the rural community in northwestern Pennsylvania.

These days, Roger Snyder is connecting with more people than ever before. The lay pastor at Endeavor Presbyterian Church in a rural part of northwestern Pennsylvania connects with nearly double of what was coming through the door each week. The church’s Facebook page has 250 followers, and Roger recently conducted an online funeral that was viewed by more than 8,000 people.

It’s all part of the unique time that is occurring during the coronavirus pandemic that has caused schools and non-essential businesses to close, leaving most churches to also follow suit. Fortunately for Roger, he had already installed a regular communication program at Endeavor Church, making the transition smooth for the congregation.

For a couple years, Endeavor has been using a robocall system through callingpost.com, which allows Roger to record a short, three- to four-minute message that is then delivered to his church members. Roger would use this technology if bad weather forced the closing of the church or if there was some other important announcement he needed to relay to his congregation.

“I’ve seen prayer chains be very effective and I’ve seen prayer chains not be very effective,” Roger said. “Some of the problems that I saw that happen consistently are people embellish – they add to the story as it goes along – some people use it for power because they have information that other people don’t have, and it can just be gossipy. I can control the information on robocall and keep it to the bare minimum facts and give it to everybody at the same time.”

Using this same system, Roger is now recording short messages for worship that are being received by his 38-member congregation – two-thirds of whom either don’t have a computer or have one and don’t like to use it – on Sunday morning. He’ll record the sermonette on Saturday or even Sunday morning before the scheduled 9:30 a.m. call goes out. For just $15 per month, a price that limits the calls to under five minutes, callingpost.com will make those 38 phone calls to the church’s membership.

“A lot of them wish I would preach that short every week,” Roger said with a chuckle. “It’s really kept a sense of community and everyone on the same page. We have people from a lot of different directions from over an hour away. It’s been a newly-made family as the church has developed over the last three years. This has provided a sense of unity as well; they’re not just out there.

“The speaker phone has been used. Some people let it go to their answering machine that way they can record it and play it over.”

At the end of the message, Roger lets people know when they can expect the next call. During Holy Week, Roger recorded a robocall message for each day, generally consisting of a scripture reading and short devotion. For Maundy Thursday, the call led those on the line in communion.

“One guy was driving a tow truck,” Roger said. “He had his bread and wine ready and knew to pull off the road at 7 o’clock. Another place there were three families gathered together in one home. Just a lot of neat little things that I wouldn’t have predicted to happen happened. The whole church felt very connected even though we were all dispersed.

“We have ‘snowbirds’ (people who travel south during the winter months). These robocalls have been a great way to keep connected with the snowbirds as well. I’ve gotten a lot of feedback that they appreciate that and they feel like they are a part of things.”

Roger also tries to call each of his members once every other week. Through these new connectional pieces, and in this time and place, Roger has noticed his congregation supporting one another. With the nearest grocery store nearly an hour’s drive away, he knows of members of his congregation who are reaching out to others and doing shopping for them.

“We’ve had people looking out for each other,” he said. “People are calling the shut-ins more often and things like that.”

Aside from the robocalls, Roger has been posting “daily meds” (meditations) on Endeavor Church’s Facebook page. The post, which consists of a scripture verse, was accompanied by pictures during Holy Week and made available to the account’s hundreds of followers. And, because of the rural nature of Endeavor, PA, Roger paid $1 a day to boost some posts on Facebook during Holy Week, which allowed them to be seen by everyone within a 45-mile radius of the church.

“It was just enough to be intriguing and to cause people to think,” Roger said. “I think anytime people stop and spend a moment thinking about God is a good moment. So that’s what I shoot for.”

In the middle of March during the early stages of the pandemic, Roger was asked to perform a funeral service for a close friend’s son. The soon-to-be 25-year-old dirt track race car driver lost his nine-year battle with cancer, and the funeral was held a local funeral home. With mandates at the time limiting gatherings to 10 people or less, the service was broadcast on the funeral home’s Facebook page. The service for the well-known and well-liked racer was watched live by 4,000 people and attracted more than 8,000 total viewers by the time the service was taken down a few days later.

“It’s been a nine-year roller coaster ride for everybody in the community,” Roger said. “I have done a lot of funerals and I’ve never seen a family this tight. They are very close.”

It’s all part of a new normal for churches and pastors during a unique time that has everyone seeking the most direct way to stay connected with their parishioners.

“I try to recognize and validate the common things we’ve heard in a lot of the virtual services, things like fear,” Roger said. “I’ve tried to make those messages only a third of what I send out. I try to make two-thirds of them about redemption — taking a time that feels worthless – and through God it becomes empowered. I’ve been concentrating on the personal story. We can become so bombarded with COVID-19 that our brain scrambles and melts. Going back to the salvation message is very valuable.

“So often this reminds me of an Old Testament setting where there’s a whole society that’s hurting at once. We need to recognize and call to God that we need him. God is using people in practical, everyday ways, where it’s not just go to church on Sunday and check off the box. And that’s what I love.”