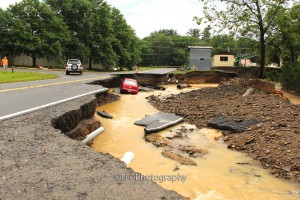 A road in White Sulphur Springs was completely washed away by the flooding in West Virginia on June 23. Ronceverte Presbyterian Church has been at the center of the response for people in Greenbrier County. (Photo courtesy of Nima Shahab Shahmir)

These days, the story of the Good Samaritan has a different meaning to many in southern West Virginia. That area has been affected by a “1,000-year flood” when nearly a foot of rain fell in a few short hours on June 23, leaving 23 dead and 1,200 homes either destroyed or severely damaged.

“When we read the Good Samaritan story, I think we like to see ourselves as the Good Samaritan,” remarked the Rev. Stephen Baldwin Jr. “You wanna be the one who defies expectations and shocks people and does the right thing in the face of all of that. But in this flooding, we’re the man lying on the road half-dead. We’re the one in need of mercy.

“West Virginians are proud people. We are not comfortable in that position, and yet that’s exactly where we’ve been the last few weeks. It’s been a testament to us to learn about God’s mercy.”

Hoping to pick their brothers and sisters up off the ground, heal them and get them on their way again, Stephen and his congregation at Ronceverte (pronounced Ron-se-vert) Presbyterian Church have opened their doors to those in need.

“When this flooding started happening, people – friends, members of the congregation – started posting videos online of them up on their roofs, rushing water all around,” recalled Stephen, a life-long resident of Ronceverte, WV. “And they couldn’t do anything. I couldn’t get to them and nobody else could get to them. They were in a position where they were stuck. That feeling of hopelessness that I had and other people had as we saw our friends, our family members, our neighbors, our church family – and we couldn’t do anything to help them. Gosh, that was an awful, hopeless feeling.”

That evening, Stephen and some members of the community gathered and immediately starting putting plans of action into place. Meetings were scheduled with several local ministers and the Red Cross to help get relief for those who were affected by the flooding. That gathering, which originally consisted of a handful of people, has grown into a twice-a-week briefing for all non-governmental organizations in Greenbrier County that the Federal Emergency Management Agency (FEMA) and state officials also attend. 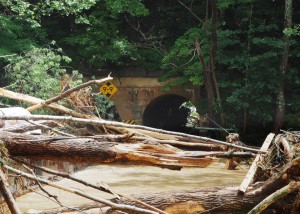 This is the view of Hart’s Run Tunnel where a road was turned into a river full of flood debris. (Photo courtesy of Mike Wyatt)

Stephen also turned his personal Facebook page into a resource for flood victims. It includes things likes when running water is being restored; places to go to get gas, clothes and shelter; and the phone number for FEMA. There are also updates on supplies and volunteers, boil water advisories, warnings of a debris removal scam, times of press conferences and other vital information for those in Greenbrier County.

“It’s really just hard to get information in the midst of all of this,” Stephen explained. “There’s no power, phone lines were down, communities were cut off from one another, so there were few ways to communicate with each other except through social media. Cell towers were still up, so if your cell phone was still charged, you could communicate through social media.”

Stephen’s Facebook page also gives people a direct line of contact to donating money. All told, Ronceverte PC has received nearly $17,000 in donations since the flooding occurred, with money coming from around the country and from as far away as Malawi, Africa. Those are sizeable donations considering Ronceverte PC averages 65 worshipers on a given Sunday.

Of all of the donations that have come Stephen’s way, it was an $11 giving that has left the biggest impression on him and his church. A young boy in Morgantown learned of the flooding and decided to send his entire allowance to the church to help with the flood relief. It was a stirring gesture that left the congregation moved. 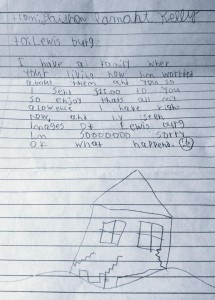 “Once I started posting those updates, his mom saw them and this 9-year-old boy was touched by what was happening here and he wanted to do something to help,” said Stephen, who went to high school with the mother. “He wrote a note, drew a picture of flooding, put his $11 inside and sent it to our church because he wanted to help. We all, of course, just bawled.

“The young man faces struggles of his own. His father died when he was very young and he has a type of arthritis that makes it hard to get out of bed some days, as a 9-year-old. Yet he set his struggles aside and helped us by sending his entire allowance – everything he had – for flood relief.”

The church building also hosts work parties from the West Virginia Ministry of Advocates and Workcamps, Inc. Because of the space that is reserved for these groups, it has allowed several families of the church who lost their homes in the flood to use the church’s facilities.

One woman from the congregation who had her house destroyed worked out of her home and is now setting up her healthcare business in the church. When she’ll be back in her own home no one knows. FEMA is estimating that it will be five years before things are rebuilt in Greenbrier County.

“I’ve never been in a war, but this looks like a war zone to me,” Stephen described. “The pictures I’ve seen of war zones, it’s what this looks like. By the same token, the pictures that I’ve seen of this don’t do justice to what you see and what you smell in person. The stench, the stickiness, the weight, it absolutely wrecks houses, wrecks lives, wrecks families. Politicians talk about mud-slinging. Well, mud-slinging is actually a good thing around here. We try to get as many people as possible to do as much mud-slinging as they can.”

One constant around Ronceverte PC is the congregation’s faith in God, which is shown through its act of kindness. And yet, the inevitable question of “How could a loving God do something like this?” continues to come up.