It began as a fundraiser for First Presbyterian Church of Morgantown, WV, in 2007, but nearly a decade later, it has grown into a very large community event that has raised nearly a half million dollars to help feed the hungry in the community.

Empty Bowls Monongalia started out as a simple soup luncheon, but it now consists of 50 restaurants donating 400 gallons of their finest soups for an all-you-can-eat meal that also includes auctions and raffles. All told, through the luncheon and civic donations, $140,000 was raised in connection with the 2016 event alone.

There’s also bread and cookies available during the fourth Saturday in February, and don’t forget the handmade ceramic “empty bowls” that everyone gets to take with them. The bowls are a reminder throughout the year of the people who are struggling to find food.

“It’s for people who want to come and give back,” said Donna Tennant, the chair of Public Relations for Empty Bowls Monongalia. “One of our mottos is, ‘We stand in a soup line so others won’t have to.’”

The most recent Empty Bowls event, which for the third straight year was held at the Hazel & JW Ruby Community Center at Mylan Park in Morgantown, drew roughly 2,000 people, a far cry from that first event nine years ago at First Morgantown. Looking for a way to raise money for its Sunday morning pancake breakfast, a member of the congregation, Mavis Grant-Lilley, heard about the Empty Bowls program and decided to hold a soup luncheon at her church. It raised $4,700 and sparked great interest around the area, causing the church to connect with the community in order to make it bigger the next year.

“I said afterwards, ‘This really is too good to keep for the church,’” Mavis recalled. “’It really needs to become a community project.’”

Monongalia was created and the luncheon was held at the larger St. Mary’s Roman Catholic Church. During the past eight years it has morphed into an event that no one could have seen coming.

“It’s just been amazing how this project has grown,” Mavis admitted. “I have been shocked by it and absolutely thrilled.”

“It started out as such a small project, I don’t think they realized how it would grow over the years,” Donna added. “It’s just continued to grow because people know there are people out there who really don’t have enough food for the day.”

Tickets are $15 (12 and under are free) to attend the soup luncheon, with the money and awareness from the event aimed at those less fortunate.

“So many times we don’t realize that right in our community are people who are food insecure,” Donna said. “I think it’s important that we become aware of that. We think we’ve gotten the word out to everybody about Empty Bowls and food insecurity, and we’re still meeting people every day that have not heard about Empty Bowls. It’s our job, it’s our goal, it’s our passion that we continue to make sure that people in our community know that there are others out there who need our help and need our support.”

“We have a lot of children who we send meals home with. It’s called the Backpack Program,” Donna said. “We send food home with them on the weekends because there are families who do not really have enough food to make it through the weekends.” 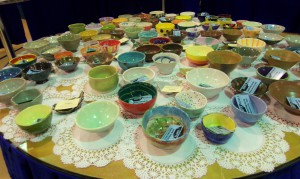 ounty’s schools. In 2011, the Synod of the Trinity approved a $3,000 Network Grant for the program to create an educational video and buy a video projector. (View a video about the Empty Bowls program here.) There are also food collections and fundraisers throughout the year to help fund the Empty Bowls program and keep food in the pantries.

“Giving out an amount of money to a pantry once a year is not enough to sustain them for the entire year,” Donna said. “So food collections is another very important part of what we do.”

Another side to the Empty Bowls program is the bowls themselves. In the initial stages of the program, a person would come to the luncheon, pick out a handmade bowl and eat their soup out of it. Now, the soup is eaten in Styrofoam bowls and the person picks out a ceramic bowl to take home when they are finished. The bowls are created in several pottery studios around Morgantown and are even made by students in pottery classes at West Virginia University. The West Virginia Black Bears, a local minor league baseball team, made bowls that will be part of the raffle in 2017.

And then there’s the soup. Initially, only a few restaurants contributed to the Empty Bowls luncheon but now they line up to donate their best stuff.

“Over the years it 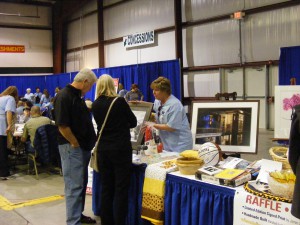 has just grown, from 20 gallons of soup to 400 gallons of soup,” Donna said. “We have every single kind of soup you can imagine, from chicken noodle to chili to seafood-based soups. We have something a little bit for everyone.

“Every year we have a lot of folks who say, ‘Hey, I know it’s coming up, and don’t forget I want to donate soup.’ The churches are the ones who really get involved in making the cookies.”

With the Empty Bowls program coming in late February, it makes for a perfect time to come in out of the cold for a hot bowl of soup – or two.

“You can come in in a warm place and a warm setting,” Donna said. “It’s a community event. It’s nice to come out and see your neighbors. It’s like a big event where the whole neighborhood gets together. We can visit, we can socialize and we can eat soup. It’s an event that I would never want to miss.”

And it all grew out of a pancake breakfast fundraiser at First Presbyterian Church of Morgantown, an idea that certainly has had a greater impact than anyone could have imagined.

“The Holy Spirit just took it and blew it away,” Mavis said. “It has touched people’s hearts because the need is great. People know that and they have responded. It has become a real community event.”