Carlisle group continues to Lend A Hand to those in need

In 1989, no one could have seen this coming. But here it is 27 years later and the impact Lend A Hand has had on not only the locations it has visited but also the volunteers who have traveled to those towns is immeasurable. 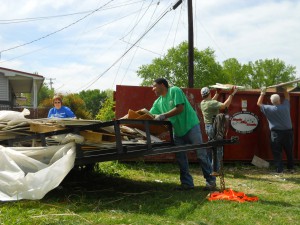 Volunteers from Lend A Hand clean up a property in Tennessee following a storm. The disaster response team from the Presbytery of Carlisle will travel up to 20 hours to help communities in need.

A disaster response and assistance program that is a mission project of the Presbytery of Carlisle, Lend A Hand has been to large cities like Nashville and New Orleans but has also traveled to small towns in Iowa for relief work there. Generally speaking, Lend A Hand will travel within 20 hours of its home base in Camp Hill, basically allowing for work to be done anywhere east of the Mississippi River.

“It’s a way to see the United States,” joked Jim Davis, the Office Coordinator for Lend A Hand.

Jim, who has held that position for close to four years after taking over for Bill Bauer, is in charge of assigning a team leader for the trips and making sure the work groups have a place to stay. He and his wife, Deb, started going on Lend A Hand trips in 2008 and quickly grew passionate about the work that was being done.

“She took a trip to D’Iberville, MS, after Katrina and kept saying, ‘You have to take one of these trips,’” Jim recalled. “Being a teacher, it’s kind of tough. And I was not excited about going down to Mississippi in the middle of summer. I retired in June and took a trip to Iowa in November and I was hooked. It’s a special organization.”

While Lend A Hand was started in 1989, it was “hit or miss” in terms of work trips prior to 2005 when Hurricane Katrina rocked the Gulf Coast. The storm created an influx of volunteer opportunities in places like D’Iberville, and in 2006 the Presbytery of Carlisle took the organization under its wing.

In 2016, Lend A Hand celebrated a couple of milestones. The first was its 100th trip since being affiliated with the Presbytery of Carlisle, a span that covers 11 years and 15 states. It also took its 30th trip to Point Pleasant Beach, N.J., where Lend A Hand has been helping people recover from Hurricane Sandy since the storm ravaged the East Coast in 2012. Lend A Hand has actually taken 31 trips to New Jersey, with all but one ending up in Point Pleasant Beach, a pattern that is intentional on the part of the work group.

“When there’s a disaster, we usually like to go to the same area and kind of adopt that place,” Jim said. “There’s a comfort. Every time we go on a trip, it’s almost like a mini-reunion. When we ‘adopt’ a town, a lot of the people there we know and develop relationships.”

All told, in the 30 trips taken to Point Pleasant Beach, there were over 500 volunteers who made the trip, giving an estimated 18,000 hours of labor in 115 houses. However, that number included 245 individuals who were making multiple trips, resulting in a burnout effect. 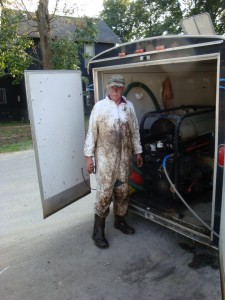 Nelson Lewis, a volunteer from Maryland, shows the effects of a long day of disaster response cleanup in Iowa.

“A lot of people can muckout. It doesn’t take any kind of skill,” Jim said. “And people are willing to get dirty to do that kind of work. But as the work starts to change, some people don’t like to do drywall or don’t want to do finish work, so you get a different mixture of volunteers.”

While Lend A Hand provides the manpower, normally it relies upon the leaders in the areas themselves to assign the work that needs to be done. Lend A Hand does know in advance what work will be done so it can bring the proper equipment needed to complete the job. And as far as construction skills are concerned, when asked if they are necessary, Jim replied, “Absolutely not.”

“If you have no skills at all, by the time you come home you’re going to have some skill,” Jim continued. “For me, every time I go, I’m learning how to do something. We’ve always managed to have very skilled people on the trips. It just happens. And if there’s something we can’t do, we’ll admit we can’t do it.”

Lend A Hand, which also has a 10-year working relationship with students at Elizabethtown College, takes close to 10 trips a year, most of which arise in response to a situation that has taken place during the year. Factoring in five work days, the trips usually span a week depending on the amount of travel time needed. The average trip includes about a dozen people with 24 being the maximum, and the volunteers are asked to pay in the neighborhood of $150 to cover the cost of food and accommodations. The building supplies are generally paid for by the organization that is coordinating the work. 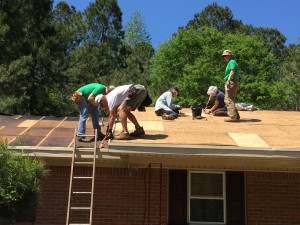 Lend A Hand volunteers replace a roof in South Carolina.

“We don’t work on businesses, we don’t work on rental properties,” Jim added. “So the goal is to get people back into their homes as soon as possible. Most of these people cannot afford paying for supplies and paying for labor so they depend on volunteer labor.”

For Jim and Deb, it has been a way to give back after being helped themselves many years before. The Wilkes-Barre natives were hit hard by Hurricane Agnes, which caused massive flooding and destruction across the state of Pennsylvania in 1972.

“My parents’ home, my wife’s parents’ home, our apartment and her grandfather’s home all had six feet of water on the first floor,” Jim said. “Out of nowhere people showed up to help muck out and do this and that. It started out as, ‘When we have the opportunity, we have to pay it back.’ And it just continues.”

Lend A Hand is also blessed with its own fleet of vans, but how it ended up with one specifically is a story that relates to the specialness of the group. It found a Department of Defense vehicle for sale and when Lend A Hand looked into it further, not only did it have very low mileage and was in great condition, it was also the exact shade of Lend A Hand green.

“It is truly amazing,” Jim said. “This is one of those organizations where God works in mysterious ways. He is everywhere. The fact that we can take over 100 trips and the fact that we can get these volunteers – on our last trip to New Jersey we had a volunteer from Hawaii… It’s amazing.”