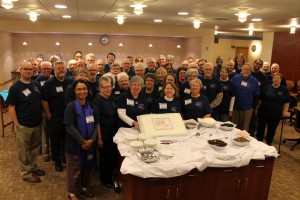 The body of the Synod Assembly gathers around a 300th anniversary cake, which helped kick off the Synod’s year-long birthday celebration.

On Sept. 21, 1716, it was decided in Philadelphia that the first synod in the United States should be formed. For two days on Oct. 24-25, 2016, three centuries of work was celebrated as commissioners and other leadership from around the Synod of the Trinity gathered at the Penn Stater Conference Center Hotel in State College, PA, for the annual Synod Assembly Meeting. The culmination of the celebration occurred Monday night with, of course, cake and ice cream, but also announced were ways the Synod will be looking ahead and supporting its presbyteries and congregations as they strive to do God’s work.

Among those ways is a matching grant of $3,000 presbyteries can apply for to be used toward a world mission project or partnership of their choice. If a presbytery partners with another presbytery or uses the funds toward something brand-new or new within an existing relationship, the Synod will increase the grant by $1,000. A second grant opportunity available comes in response to the General Assembly’s passing of the Plight of the African American Male overture that was presented by Pittsburgh Presbytery. The Synod will provide monies to seed projects that relate to this issue. The Synod is also preparing to form a task force to raise awareness around hate groups in this region. 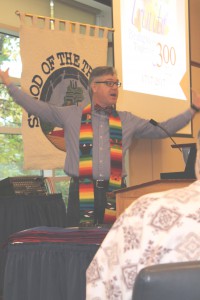 The Rev. Landon Whitsitt opened the Synod Assembly with a spirited worship service.

Monday night also including the unveiling of the “Revealing Hope” series that will aim to showcase people’s stories of hope and resurrection. A video tribute to singer/songwriter David Bailey, the son of the Rev. Dr. Kenneth Bailey who battled brain cancer, and the personal story by Lehigh Stated Clerk Marsha Heimann of how that presbytery played a key role in keeping a strong relationship between two congregations were shared. Future work highlighting people’s “Revealing Hope” stories from the region will be done through Communications Coordinator Mike Givler as he seeks story ideas relating to this topic as well as historical pieces on presbyteries and congregations throughout the Synod.

The Assembly meeting began with a Monday morning worship led by Landon Whitsitt, the Executive and Stated Clerk of the Synod of Mid-America. During his sermon Landon recalled being part of a retreat with then Synod of the Trinity Executive Bruce Stevens and explaining to the group about the Policy Governance leadership model. He said, “It’s not the fact that Policy Governance is the thing you all are doing that is exciting to me, it’s the fact that you all are striving to live faithfully to Jesus Christ, and not get locked into old expectations about what a synod can or should be. You are boldly asking the question: What does it mean for us to be a council of the church in relation to the word of God today?”

During worship, an offering to support Pittsburgh Presbytery’s portion of “Freedom Rising: The Presbyterian Church (U.S.A.) Reaching Out To Young African American Men” was taken and eclipsed $1,000. The national initiative is named in honor of the late Eugene “Freedom” Blackwell, who was the advocate for the Plight of the African American Male overture at General Assembly this summer. 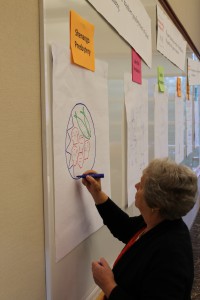 Much of Monday centered on “homework” assignments given to the commissioners. Among their duties was to speak with their presbytery’s leadership team and decide what Bible story best represents their area. Commissioners then drew a picture of that story and others in attendance were charged with trying to figure out the story. Commissioners also gave a five-minute presentation that told the audience about one good thing going on in their presbytery, the toughest thing that’s happening there and what would make a difference for their region. Round-table conversations also enabled commissioners to discuss other concerns in their region like justice issues. Information from note-takers will be gathered and returned to the commissioners.

During the business portion of the meeting, it was noted that the per capita giving for 2018 for the Synod will remain at $2.30. Because there is only one Synod Assembly per year and it occurs in the fall, the 2017 figure was voted on last year.

With the term for Vice Moderator Kate Sillman (Huntingdon Presbytery) expiring at the end of the year, fellow Huntingdon commissioner Helen Kester was installed as the new Vice Moderator. Pittsburgh Presbytery’s Johnnie Monroe, who was unable to attend the meeting, remained the Moderator of the Synod for a second year. Three new Governing Commission members – namely John Bolt (West Virginia), David Demarest (Upper Ohio Valley) and Judy Smith (Lackawanna) – were also recognized. Due to the Synod’s continual implementation into the Policy Governance leadership model, Susan Faye Wonderland’s terms of call as the Synod’s Transitional Executive were extended to the end of 2019. 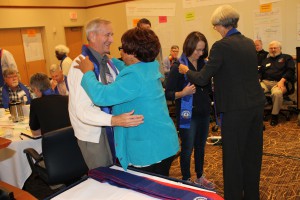 Bill Netting (Donegal) receives his commissioner stole (and a hug) from Jean Kennedy (Pittsburgh) as Vice Moderator Kate Sillman presents one to Governing Commissioner and new Synod Vice Moderator Helen Kester, both of whom are from Huntingdon Presbytery.

Musical accompaniment for the meeting was supplied by Tony Leach, a professor of music and music education at Penn State University, and Jo Lash, a retired music teacher from the State College Area School District. Also during the meeting, two video clips from a BBC documentary “An Independent People: The Story of the Ulster Presbyterians” was shown to help give some background on how Presbyterians traveled from Scotland and established the denomination in the United States.

Tuesday morning’s devotions were handled by Dianne Kareha (Lehigh), who spoke about the Christmas Joy Offering, which “helps provide financial assistance to current and former church workers and their families and also enables deserving students to attend Presbyterian-related racial ethnic colleges and schools.”