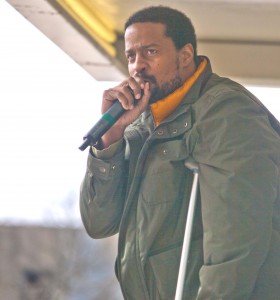 Cancer couldn’t keep the Rev. Eugene “Freedom” Blackwell down. The 43-year-old pastor of House of Manna Faith Community in the Pittsburgh neighborhood of Homewood, PA, traveled to Portland in late June for the General Assembly of the Presbyterian Church (U.S.A.). Confined to a wheelchair after losing his left leg through cancer surgery a year earlier, Freedom didn’t miss out on his chance to be an advocate for Pittsburgh Presbytery’s overture on the Plight of the African American Male.

“He stood bravely in Committee 10 on one leg, making a fervent appeal that (the General Assembly) adopt this overture,” said Sheldon Sorge, General Minister of Pittsburgh Presbytery in an article by the Presbyterian News Service. “He had been suffering from osteosarcoma for nearly three years, losing his left leg late last year. The cancer was metastasizing as we gathered in Portland, but he kept the faith even though he was unable to sleep or eat. Following GA, his physical condition deteriorated even as his faith remained strong, until he joined the Church Triumphant. His earthly battles are done, while ours continue as we move forward to engage the challenge our church has set before us.”

Freedom died Aug. 29 from the same cancer that took his leg. But the disease couldn’t take his spirit as he battled through the illness to see through the important work of the overture for which he helped write.

UPDATE: In honor of Freedom’s work with the Plight of the African American Male overture, Pittsburgh Presbytery has named future work associated with this overture “Freedom Rising: The Presbyterian Church (U.S.A.) Reaching Out to Young African American Men.” Freedom’s legacy was honored and there was a celebration of the passing of the overture on Sunday, Oct. 2, at Hick’s Memorial Chapel on the campus of Pittsburgh Theological Seminary. For a flyer with more information, click here.

“Eugene ‘Freedom’ Blackwell was a man of passion for Jesus, justice and his community,” Sheldon said. “He was a remarkable advocate for justice in his community, generating untold investment through finances and personal involvement by churches across our presbytery in ministries to the people of Homewood. He was raised there, and stayed there, even when he could well have taken a much more lucrative and prestigious position in wealthier churches and communities. He lived a life of humble means, investing his energy not in self-promotion but in helping the needy in his community.

“To the end, Freedom maintained great faith in the power of the Holy Spirit to do abundantly above all that we could ask or think. He lived in Scripture, then applied it to the great needs facing his community. He was unafraid of guns pointed at him, or of authorities who resisted his vision of changing the world they controlled. Even as his strength waned toward the end, he would encourage those who visited more than they could possibly encourage him.

Sheldon continued, “Freedom started a new congregation in a community that could never support a new church. He brought together a coalition of people from across the county as allies in this work, inspiring them through speeches and sermons that gripped the hearts of many. Through his advocacy, many people in wealthy circumstances invested countless hours and dollars in the ministry to which he was giving his life.

Read an article on the reaction to the passing of the Plight of the African American Male overture here.

Rev. Dr. Johnnie Monroe, the moderator for the Synod of the Trinity and another person who was passionately involved in the writing of the overture, reflected on Freedom’s impact on the overture and the lives he touched.

“Pastor Freedom Blackwell was a visionary, a lover of people, a lover of God and a lover of justice,” he said. “These are just a few ways that I describe this young servant of God. His vision was to develop a holistic ministry for what he liked to call ‘the every day people of Homewood.’

“I remember very vividly, when we needed someone to be the advocate for our overture at GA, as the Prophet Isaiah, he stepped forward and said ‘I’ll go, send me.’ He went and advocated well for the passing of our overture. Freedom was one who worked long and hard for the ministry of reconciliation-seeking ways to tear down the walls that divide the people of God. He was a young voice in the PCUSA challenging us to follow Jesus Christ.

“I believe we will witness the impact of his ministry in Pittsburgh Presbytery, the Synod of the Trinity and the PCUSA for many years to come.”

The family requests donations be given to House of Manna Ministry or the Blackwell Children Education Fund. Checks or money orders should be made payable to “House of Manna” with either “HOM Ministry” or “Education Fund” noted on the memo line. Cards, condolences and contributions may be sent to the House of Manna, 7128 Hermitage Street, Pittsburgh, PA 15208.