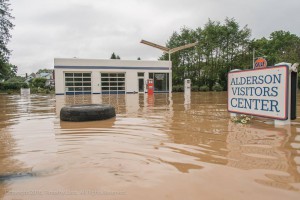 This was the view in Alderson following the devastating flooding that ravished southern West Virginia.

Images resonating from southern West Virginia in the wake of the June 23 flooding were predictable. Pictures showed roads that were turned into rivers, houses that had been swept off their foundations and cars that were now parked on their roofs. What is left behind is what some have described as a “war zone,” but many times that just refers to the properties. It doesn’t touch on the people who will continue to call areas like Greenbrier County home.

Repairing lives is what groups of chaplains and ministers have been doing since nearly a foot of rain fell on southern West Virginia in a few short hours in late June, resulting in a “1,000-year flood” that left 23 dead and 1,200 homes either destroyed or severely damaged. These pastoral care men and women have sought out those displaced flood victims and offered comfort and support during this unimaginable time in their lives.

The Greenbrier, a hotel in the middle of the flood area, has seen 700 people who were affected by the flood live there for free. It has been the perfect place for people like the Rev. Lanny Howe, the pastor at Alderson Presbyterian Church, to travel to and help provide some reassurance to those staying there.

“It was a day when it was raining and I was told before I went into The Greenbrier that there is kind of a Post-Traumatic Stress Disorder that comes with flooding,” Lanny said. “People who have been flooded out get very nervous when they hear rain. I just tried to reassure them that the rain that was coming down wasn’t going to be anywhere near what had happened before.”

While Lanny spent just one day at The Greenbrier, he and his congregation – which averages just 12 people on a Sunday morning – have been doing plenty of other things to help with the situation in southern West Virginia.

The basement of the Alderson church is the home to the community food pantry. Normally, the food bank encompasses one room, but since the flood three rooms are now needed to hold all of the donations. Upstairs in the church, two lounges are filled with clothing that no longer fits in the local thrift shop and adjacent 53-foot trailer.

“Alderson is the most amazing place I have ever ministered,” said the 74-year-old Lanny. “By in large the efforts to clean up down there are practically over. The town is cleaned and we did almost everything without any kind of governmental help. It was all neighbor helping neighbor and the organizations in town just pitching in and doing whatever needed to be done.” 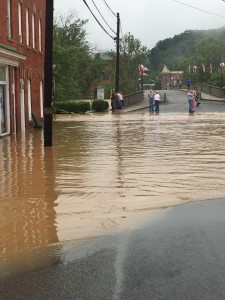 Many of those supplies will go to White Sulphur Springs where Lanny is also the session moderator at the First Presbyterian Church. This congregation, which does not have a called pastor and has been using supply pastors for the past two years, is another small church, averaging about 24 at Sunday worship.

It’s going to be a long road back for those in White Sulphur Springs.

“That’s going to be very-long-term recovery,” Lanny said. “We’re talking probably six weeks until they even have water. White Sulphur is going to be one that the Synod and the Presbytery are going to need to pay attention to for at least a year if not two years.”

The church building was used as the headquarters for Presbyterian Disaster Assistance and for pastoral counseling provided by the Presbytery of West Virginia.

It’s been a blessing from an otherwise horrible situation, one that some people continue to blame God for.

“If you listen to some of the fundamentalist preachers in the neighborhood, they’ll tell ya it’s because we’ve become lax on homosexuals and if we would just crack down on them and transvestites God would stop doing this sort of thing,” Lanny said. “My theology is that it’s kind of like, ‘Where was God in the concentration camps?’ The best line I ever heard on that was, ‘He was standing naked in the line crying with everybody else.’ That’s my theology on natural disasters – things happen. I personally believe the changes in climate and climatic activity is a result of that and it’s basically what we’ve done and as usual we’re reaping the results of our efforts.”