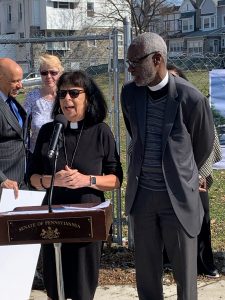 Rev. Ruth Santana-Grace stands with Stated Clerk the Rev. Kevin Porter during a gathering in Philadelphia where Ruth is the executive presbyter. Ruth makes up half of a co-moderator team that is standing at the 225th General Assembly (2022).

For the Rev. Ruth Santana-Grace, it’s been a bit of an unconventional journey to becoming the executive presbyter at the Presbytery of Philadelphia. With a masters in Public Administration, committed to a life of public service, she worked in Washington D.C. and Italy – bringing together elected officials to discuss areas of common concern such as economic development and education. The child of Presbyterian leaders in the Hispanic Presbyterian Church in New York City, Ruth followed the footsteps of her father – both being ordained as second career pastors. And now she’s looking to add one more rung on her ladder of career accomplishments as she is part of a team that will stand as co-moderators of the 225th General Assembly (2022) of the Presbyterian Church (U.S.A.).

Ruth is quick to credit her parents the Rev. Felix and Elder Carmen Santana, who were part of the diaspora – the large migration to the United States from the island of Puerto Rico in the early 1950s – for giving her the foundation with which she has been able to thrive throughout her career.

“They were faithful Presbyterians,” Ruth said of her parents. “They loved this church. That I am coming from that lineage – my dad was a sugar cane cutter as a young boy and my mom worked for the Department of Health helping with infants – that I can stand in this room, prevail or not prevail, it says something. I would never have imagined myself in that room.”

“That room” is the space where two co-moderator teams will be Saturday, June 18, when voting takes place at the General Assembly. Standing with Ruth is the Rev. Shavon Starling-Louis, a pastor from Charlotte, NC, who is also co-moderator of the Presbytery of Charlotte’s Anti-Racism Ministry Team. The other co-moderator tandem that will be presented consists of Josefina Ahumada, a commissioned ruling elder from the Presbytery de Cristo in southern Arizona and western New Mexico, and the Rev. Marilyn McKelvey Tucker-Marek, a minister from Flint River Presbytery in Georgia.

A graduate of Princeton Theological Seminary along with studies on a Doctor of Ministry from San Francisco Seminary, Ruth has been the executive presbyter at the Presbytery of Philadelphia for the past eight years. Prior to that, she was the executive presbyter at San Gabriel Presbytery in Azusa, CA, for nine years after serving as an associate pastor at the First Presbyterian Church of Bethlehem, PA, from 1993-2005. Ruth is wrapping up her 12 years of service as a trustee at Princeton Seminary, where she was the first person of color to serve as vice chair. She is also wrapping up two terms on the Board of Directors and the Executive Committee at the Presbyterian Foundation and a council member of the Interfaith center of Greater Philadelphia.

For Ruth, this is not her first time considering standing for moderator of the General Assembly. While at San Gabriel Presbytery, she contemplated it but instead opted to come east to Philadelphia.

“God had other plans for me,” she said of her decision eight years ago. “Philadelphia has been a great opportunity and place of profound service. I really believe that I had missed a window for which I had considered being called.” 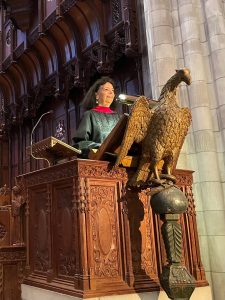 Rev. Ruth Santana-Grace has been leading the Presbytery of Philadelphia for the past eight years.

Notwithstanding making peace with this reality, standing for moderator remained in the back of Ruth’s mind, but it was an unexpected phone call on a Monday morning in February that urged her to stand for moderator this year that got the energy flowing once again. After conversations with colleagues at the Presbytery of Philadelphia and around the country, she could see the stars aligning for her to make the commitment to stand for moderator.

“Am I really being called? What gifts can I bring?” she asked herself during this discernment process. “The answer kept overwhelmingly being, ‘Let’s do this.’ We had a prayer session one night in March. At that moment, I said that I am going to trust that I am being called to stand. I don’t know if I’m being called to prevail, but I am being called to stand in the room and offer thoughts, hope and considerations that come to my heart and mind of this denomination that has grown me and has largely been responsible for who I have become – good, bad and indifferent.”

A month later, the Presbytery of Philadelphia called a special meeting and voted unanimously in support of Ruth’s desire to stand for moderator. It was another confirmation to Ruth that this was her time to take this step.

“To hear five pastors who were making the recommendation to the full presbytery say this was our call as a presbytery at that meeting was one of the most humbling moments that I’ve had in ministry,” she said. “Philadelphia has claimed it as our call. It was ridiculously moving. I love these people.

“I really wanted to make sure that I knew that the call was to stand, not to win,” Ruth added. “I have seen many people defeated when they did not prevail. I have lots of ministry to do. There’s lots to do. This is one expression of leadership but there are others.”

Having committed to standing, the next task at hand was finding a standing mate. Ruth began contacting people for names of individuals who might be a good fit. Several mention Shavon as a possibility – someone Ruth had never met – and one day out of the blue Ruth contacted her and started the conversation. Shavon had thoughts of standing one day for moderator, Ruth said, but it wasn’t until Ruth’s call that Shavon seriously looked at the possibility. Within a few weeks, the invitation was extended, and Shavon and Ruth decided to stand as co-moderators.

“We represent different generational journeys, but there is this spiritual connection, energy, hope, banter and fun that makes working together easy,” Ruth said. “I felt this connection and I felt drawn to Shavon. We share a profound commitment in the resurrection that comes out of darkness.

“We both share a key commitment to our congregations. We believe that is the core of where ministry is embodied in the world, and that was important to me. We both share our concerns for social justice issues. We connected. Even though our language and words might be different at times, we’re in the same space with our spirit, determined that God is not done with us yet here, that we have to lead into a theology of flourishing.”

Ruth, who is fluent in English, Spanish and Italian, feels her ability to connect with people is a strength that will help her flourish as a co-moderator should her team be elected in mid-June.

“I am deeply relational, and those relationships have borne fruit on the East Coast and West Coast in extraordinary moments,” she said. “I love the people that I serve, and people know that. I think that authenticity of being real is something that we all offer at this time, especially after all of the isolation. I believe my bridge-building capacity has been demonstrated across theologies and races. One of the greatest privileges I had was being recognized by the Black Caucus in this presbytery in a city that was pretty polarized.” 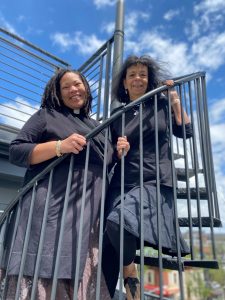 Rev. Ruth Santana-Grace, right, is teaming up with the Rev. Shavon Starling-Louis as part of a co-moderator team standing at the 225th General Assembly (2022).

If elected, Ruth hopes she and Shavon can team up to make a difference in the denomination.

“I hope that we can start reframing and reclaiming the story that goes from east to west, north to south, so that we can inspire and be reminded of who we are called to be,” she said. “There are many stories of redemptive creativity in many of our spaces. I can share a few from here but I know they are happening in other places. By being an ambassador, by affirming that those places happen, hopefully that can create a contagion that affirms God’s not done with us yet, that it’s OK if it doesn’t look the same, that it’s OK to fail.

“I love building while I fly. It allows for creativity. We don’t have to do it the way we did it before. I think that spirit allows us to engage in the conversation about how the church is to address injustices, economic disparity, the ‘isms’ in the world. For me we have to equip and strengthen the local ministers so that they can be the hands and feet in the world, otherwise we’re back to the 1960’s model and we forget the why of who we are that frames the ‘what we do.’

“I don’t bring all of the answers, but I do bring an appreciation for the complexity of who we are.”

If elected for the two-year term, Ruth still plans to continue to stay in her role as executive presbyter at the Presbytery of Philadelphia. That is part of the attraction of the co-moderator system that allows for equal division of duties between the two-person team that is chosen. Having the ability to connect with others around the country through video conferencing programs like Zoom will also help cut down on travel that is time-demanding and also costly.

It all adds up to an opportunity that Ruth – and Shavon – are being called to do in this time and place, and where it leads will be determined in mid-June. Regardless of the outcome, there will be no regrets for Ruth, who is simply embracing this new chapter.

“Clearly God is in this,” she concluded. “Even for Josefina and Marilyn who are standing, it’s a pretty historic moment. My parents must be beside themselves as they look upon this from above. If here, my dad and mom would not be contained – they would be bursting with joy for both me and the church. This is a pretty powerful moment if I let myself go there.”