Shenango, Northminster Churches take to the streets of New York

What follows is a recap written by Amy Na, the pastor at Shenango Presbyterian Church, regarding her church’s recent mission trip to Harlem, N.Y., which also included neighboring congregation Northminster Presbyterian Church. The trip was helped made possible by a $1,000 Synod of the Trinity Peacemaking Grant, which is available for travel, projects and programs developed by congregations or presbyteries in the Synod. More information about Peacemaking Grants can be found here. 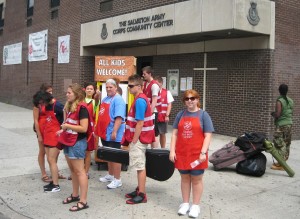 On Sunday, July 26, three adults and nine youth from two neighboring churches left New Castle, PA, for Harlem, N.Y. Another church in our presbytery, Jamestown Presbyterian Church, Pastor Don Stanley and his generous session, loaned us a van, and we traveled in one vehicle for most of the day, arriving in New York City in time for dinner and orientation with the Experience Mission staff.

The company called Experience Mission, based in Port Hadlock, WA, partnered with the Salvation of East and West Harlem. Experience Mission (EM) was founded in 2003 by Executive Director Chris Clum as an outgrowth of a movement toward short-term missions. EM, with the Salvation Army (SA) in Harlem, provides room and board for five nights and six days. We lived and ate at one SA center and worked at the other in Harlem.

At the East Harlem SA center, we slept on the floor. There were four showers — two for men and two for women. The facilities were relatively clean, and still we found roaches. There was an 18-plus group from North Carolina living and eating with us that week that were also part of EM. They stayed at the East SA center and traveled to Brooklyn for the other part of their work that week.

Every day after breakfast, we walked a mile to and from the SA centers. In West Harlem, we worked with EM and SA throughout the day. Most of our days were spent leading a community outreach program called Kids’ Club. We donned aprons and vests sporting the SA logo, and we pushed a cart through the streets to nearby local parks. Once at the park, we played music, danced the Nay Nay (video here), performed skits, provided snack treats and a craft when possible. It was an effort in local sharing and witnessing. We did these Kids’ Club activities twice, sometimes three times a day every day. Once we went to the Magic Johnson Summer School and worked with kids there. In between the park ministry, we worked at the Salvation Army.

At the SA center, we served food at 1 o’clock every day at its soup kitchen. Before the doors opened, our group ate what the homeless ate. We wore aprons, hairnets and gloves to distribute food. There was a book table monitored by us. Through the SA, our youth offered free books to all who desired them. We also worked the water coolers, distributing cups of cold water for the people on the hot streets of Harlem. When we weren’t in a park doing a Kids’ Club or serving lunch, we were working at the SA packing school backpacks, cleaning food cupboards or bleaching hallways, the food pantry and classrooms. 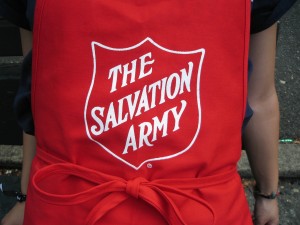 On Tuesday evening, the SA East had a hot dog night. The SA made 200-plus hot dogs (beef and non-beef) and gave them away free to the community. We helped set up tables and chairs, and we distributed the food and talked to all who sat down on the street that night. Some of our youth made connections with the visitors who stopped by to eat. It was fun and eye opening!

On Wednesday evening, we had the night off. We worked a full day and a regular schedule, but that night we took the subway to mid-town Manhattan to Times Square. We ate dinner in a pizzeria and took in the sights (street dancers, the Naked Cowboy) and some shopping (Disney Store, H+M). We finished our work on Thursday afternoon doing all the morning Kids’ Clubs, serving lunch and then we went to a local nursing home to sing and visit in the afternoon.

We spent Friday, our free day, at Coney Island. On the way to Coney Island, we stopped by the 9/11 Memorial. The students were responsible for all their food and entertainment that day. We traveled to the Poconos in PA that night and spent the night in a mountain cottage. Laura and Tony Visco, my parents and Presbyterians from the other side of the state, opened their home to the city travelers for the night, providing dinner and breakfast to the group at no charge to anyone. We arrived back in New Castle on Saturday afternoon, Aug. 1!

Upon our return, the students visited both churches during worship to thank them and to share highlights from their trip. The feedback from parents and students was positive. We had safely traveled from Amish Country to the Big Apple and returned — all in one piece!

I present two brief reflections for the churches and the Synod who helped fund this trip with prayer and finances: 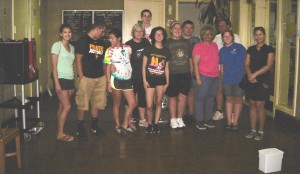 One of the most influential Salvation Army workers we met was a woman named Sandra. She had the difficult job of standing behind the volunteers who distributed the food and telling the street patrons that one per person was the rule. They would be welcome to return at 1:45 p.m. for second calls. There was never any left by 1:45 p.m. on any of the days we served. She said it lovingly and firmly over and over again for 45 minutes every day. She said it in Spanish and in English. She was never angry or short with the patrons. She was direct and unswaying. She was an example of the difficult work required in an inner-city mission center like the Salvation Army. She was the face of the SA for many of those patrons. Some were angry with her, others understood. Some yelled at her or the student volunteers and others offered blessings. Every day, Sandra offered blessings to them and every day, Sandra’s witness made an impact on our group. We thanked her for doing her hard job.

The other reflection I would offer is this: the name of the partnering organization is accurate. We worked under a group called Experience Mission. We had an experience in mission. We did not build a house or replace a roof. We did not paint someone’s living room. We pushed a cart through the streets of Harlem passing drug addicts daily to host a kids’ play time/Christian day camp. We had to talk loud and fast to keep the kids’ attention. We couldn’t be overly religious or the parents and day care workers who brought the kids would leave. We had to work together, look out for each other and do it all again the next day! It was one of the hardest mission trips I have ever guided, and I never held a tool in my hand for the entire week, except the Bible.

Usually, we met nightly for devotions, and the kids were filled with judgments and observations about Harlem. I tried to help them see all sides of the politics, the economics and the presence of the church and the Salvation Army in the midst. Our devotional folder is attached. I reminded them if someone visited New Castle for one day, that visitor might take away incomplete pictures of our hometown, too. They bonded well together early in the trip, and their good work together lasted throughout the week.

Thank you to Shenango Presbyterian Church for the opportunity to guide this group to Harlem, N.Y., this summer. I am grateful to have had the opportunity — sweaty and smelly as it was — to see the church at work in New York! I am grateful to Northminster Church session, congregation, youth families and the Shelocks for their participation in this mission experience. Further, both churches acknowledge the gift from the Synod of the Trinity that helped offset much of our costs!