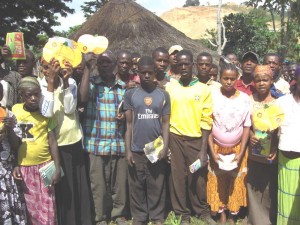 All ages are benefiting from the literacy centers that are being built in Ethiopia through sales of pumpkins in Washington Presbytery.

Pumpkins. Are they a fruit or a vegetable? Most people don’t care that the big, orange plant is actually a berry fruit, all they care about is whether or not it tastes good in a pie or has a nice rounded surface for which to paint a face or carve out a jack-o-lantern. But in the Washington Presbytery, pumpkins have a much greater meaning this time of year.

Every fall, the presbytery engages in a pumpkin sale with its churches, and the proceeds completely support a Literacy Project in the South West Bethel Synod of Ethiopia. The Washington Presbytery has had a partnership with the Ethiopian synod for over 20 years and has been selling pumpkins for about half of that time to help set up literacy centers there to teach people of all ages how to read and write their own language. Math is also part of the curriculum, as well as learning the English language, which students need to know in order to get beyond the sixth grade.

“The literacy centers are needed and there’s a lot of communities in Ethiopia where there’s nobody who can read or write any language,” explained Rusty Salminen, the organizer of the pumpkin sales. “So they’re coming to the church asking to help them out. There’s a list of places literacy centers could start. The goal is that if they can keep this going a year or two years and show that the community is supporting it then the government will step in and establish a government school. So almost all of the centers have turned into on-going, permanent schools.

“They get volunteer teachers who usually give up a year, move from home and live in the village where they are teaching. They teach men and women, girls and boys – all ages. And they say there’s so many things that this does, like reading medicine bottles. They’ll get medicine and suddenly somebody in the family can read the instructions. There are just so many things that reading can do. 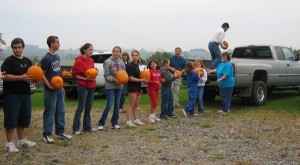 “From the church’s point of view, it’s really to anchor these young congregations in scripture because if they have no one who can read, then they become very much a prey to false teachers, people who will say, ‘Well this is what the scripture says.’ And they have no one who can double check that. From their point of view it’s really about evangelism because they are strengthening young congregations, but it’s development work at the same time.”

This fall, around 400 pumpkins were sold and close to $3,000 raised through the pumpkins sales at Washington Presbytery, which will help build three literacy centers in Ethiopia. In smaller terms, each $6 pumpkin sold will teach one Ethiopian person to read and write. Since the pumpkin sales began in 2004, as much as $8,000 a year has been collected through the sales, which has resulted in as many as six or seven new literacy centers opening in a year’s time.

“Our partners, the (South West Bethel) Synod, identified the need, and they were trying to find out ways to make these literacy centers happen,” said Rusty, who is a member at First Presbyterian Church of Monongahela. “The idea came out of the Ethiopia Mission Network. There was a presentation from Presbyterian Disaster Assistance about what they do for their hunger program in the Midwest. Farmers would give a big crop of corn and the churches would come to help harvest. And I was looking for a crop we could do that with for the literacy centers, and pumpkins came to mind.”

The way the pumpkin program works is Washington Presbytery takes orders from its congregations and delivers the pumpkins to the individual churches, which in turn sells the pumpkins for between $5 and $6. The money raised is returned to the presbytery and eventually passed on to the South West Bethel Synod in Ethiopia. 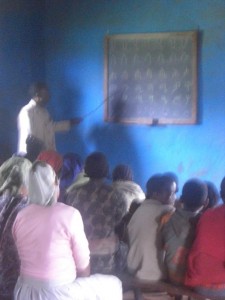 A look inside a literacy center in Ethiopia where their native language as well as English and math are taught.

In the initial years, the Washington Presbytery had a field donated to it by a local farmer and the presbytery’s congregations actually helped plant and maintain the crop, resulting in free pumpkins. When the pumpkins were ready to be picked, congregations would turn out again to harvest the crop and take as many pumpkins as they thought they could sell with them. However, the process has changed in recent years. There’s now a different farmer who does the planting and harvesting and in turn sells the pumpkins to the Washington Presbytery at a minimal cost. But through an anonymous donor, that cost is being paid for so that the total sales by the congregations are still sent to Ethiopia.

Despite what one might think, a pumpkin fundraising sale is not an original idea.

“It’s not as unique as you might think,” Rusty admitted. “A lot of churches do things with pumpkins, and that’s been one of the limits on how effective we’ve been with this program. There’s several of our congregations that are already selling pumpkins for a purpose or they are participating in a town pumpkin festival.

“Kids love pumpkins. They’re appealing. For me in 2004, the idea came in March, and it was one of those things we could still plant that year and it was very easy to explain to people. We dabbled in popcorn but pumpkins have always been the straight-forward, easy-to-understand approach.”

Not all of the churches turn around and sell the pumpkins. The Presbyterian Church of Charleroi sought the smaller pumpkins and had their younger youth paint faces on them. The congregation then gave the pumpkins to shut-ins for them to put in their windows.

“They used it for youngsters and for the elderly who couldn’t get to church and for the literacy program by paying for the pumpkins,” Rusty remarked. “So they did it all with one set of pumpkins.” 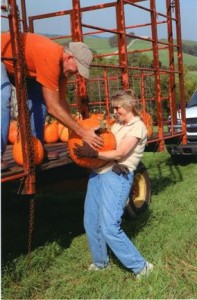 Plenty of hard work goes into the pumpkin sales each year in Washington Presbytery.

Rusty has traveled to Ethiopia on a couple of occasions and has seen the literacy centers in action. And when he tells them how the money was raised through the sale of pumpkins, he sometimes gets a strange look in return.

“In Ethiopia, the pumpkins aren’t generally orange – they have a green pumpkin that they use for food,” he said. “So it’s astonishing to people when we tell them that the money for this came from pumpkins. They wonder who would spend any money for a pumpkin.”

But it is getting done, through pumpkins and through God to help strengthen a 20-plus year relationship on the other side of the world.

“We have a partnership of three strands – the Ethiopian strand, our strand and the Holy Spirit is the strand that binds us together,” Rusty said. “We’re in a partnership to understand God better and to be closer to God. This is a need they’ve identified and invited us to walk alongside them in doing this. We’re not making these literacy centers happen. We don’t have the teachers, but we can come up with the funding, and they can come up with the people to make it happen. It’s bigger than either one of us. It’s not something that either one of us can say that we did.

“It’s very striking seeing it firsthand and you realize how everybody has a small part, but it’s really God doing the work. It was always astonishing to see a large group of people harvesting a field and each one of them was brought there by God for individual purposes and then the larger goal.”