Synod highlights changes to governance during report at General Assembly 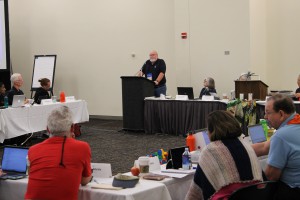 Synod of the Trinity Moderator John Bolt delivers a report to the Mid Council Committee at the 223rd General Assembly in St. Louis.

There’s a lot of good work being done by Presbyterians throughout the country. That was evident during the 223rd General Assembly in St. Louis in mid-June when several synods from around the Presbyterian Church (U.S.A.) reported on the projects and programs that are occurring in their regions.

The 2016 General Assembly Mid Council Committee urged “synods to undertake an intentional system of review and self-study and to report to General Assembly on a bi-annual basis.” Six of the 16 synods in the PCUSA submitted written reports – The Covenant, Lakes and Prairies, Lincoln Trails, Mid-America, Sun and Trinity – and were subsequently asked to follow up with verbal summaries. (Read the Synod of the Trinity’s report here.)

The reports were tied into the committee’s review of synod minutes. For the Synod of the Trinity, which has undergone a change in the way in which it is governed since the last General Assembly, it was applauded for its movement into Policy Governance and its “dynamic process of figuring itself out” as well as the granting opportunities it has available.

Synod of the Trinity Moderator John Bolt highlighted other initiatives, too, during his presentation, including:

John began by touching on the shift to Policy Governance and recalled the early learning process as one that was both a difficult shift in mindset but also enlightening. “We came to understand that the ‘owners’ of the Synod are its constituent presbyteries,” he said. “But, surprise, the ‘beneficiaries’ of the synod are those same presbyteries and their congregations, as well as other connected organizations in our region.”

The shift in governance has also created new responsibilities for the Synod commissioners, John continued. “One is governance,” he said, “which essentially had been their only previous role. But somewhat new, at least in emphasis, and perhaps even more important, is their role as liaisons. We are encouraging each of our presbyteries to include their synod commissioners on their leadership teams and we encourage the commissioners themselves to be visible in their presbyteries – some have been doing this for years, some are just thinking about it, and some will get there eventually.”

John concluded his five-minute talk by alluding to the Synod’s recent tricentennial anniversary celebration and looking forward to the next 300 years. “We may be in our 301st year,” he said, “but by grace we are still vibrant and learning a new way to be a living model of the connectional church.”