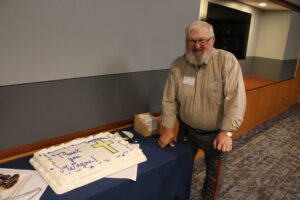 Synod Stated Clerk Wayne Yost was honored for his years of service at the Synod Assembly in State College, PA, in October 2022.

Nine years isn’t a terribly long time to be in a call, but for the Rev. Dr. Wayne Yost, he has seen plenty of change since 2013 when he joined the Synod of the Trinity as its stated clerk. Wayne has walked alongside three different Synod executives, been a leader in the mid council’s change in governance style, was part of the Synod’s transition to a virtual office and helped navigate it through a worldwide pandemic.

There’ll be one more change for Wayne coming soon – his contract as the Synod’s stated clerk expires at the end of December.

“It’s time,” Wayne said of his decision to move on. “When I was elected to my second term, I asked to be elected to a three-year term, not the standard five-year term, figuring Sue (Wonderland, the Synod’s transitional executive) was going to be retiring and I would stay on one year for the new exec.”

Wayne spent nearly 24 years as the executive/general presbyter at Kiskiminetas Presbytery before stepping in as the Synod’s acting stated clerk in March of 2013 when Leslie Shoup experienced some health issues. The roles at Kiski and the Synod overlapped for two months before Wayne was eventually named interim stated clerk and a short time later, leading to his current role without the “interim” tag.

“I had already announced my intended retirement (from Kiski) earlier in the year,” Wayne recalled. “I had been there long enough, and it was time for a change for them and for me. I thought about staying there for 25 years just to say I did that. I was the longest serving executive in continuous service, in the same presbytery, in the denomination. Then I thought my ego doesn’t need that.”

The timing was perfect as Wayne’s wife, Nancy, was close to retirement as a professor of Technology in the Special Education Department at Indiana University of Pennsylvania. It allowed them to move into the next phase of their lives simultaneously.

Going from a mid council executive to stated clerk was an easy transition for Wayne.

“The Book of Order was always my pillow,” Wayne said. “Doing a lot of COM (Committee on Ministry) work over the years, I pretty much knew the Book of Order and how to use it to get done what needed to be done.”

Prior to Wayne’s service in Kiski, he had calls as a pastor in Kentucky, Ohio, Missouri and Kansas, working with congregations ranging in size from 500 to 50. Those 18 years of service prepared him for the mid council leadership work that was on the horizon.

“During the time I was in Missouri, I felt I was being called to serve as an executive presbyter at some point,” Wayne said. 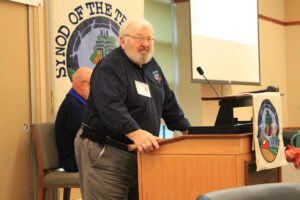 Wayne Yost address the Synod Assembly body during the annual gathering in 2018.

Despite Wayne no longer being the stated clerk for the Synod when the calendar turns to 2023, he will continue to serve in the region, having already accepted calls to be the “bridge,” or interim, stated clerk at two presbyteries within the bounds of the Synod. In October, he began serving in that role for the Presbytery of Lake Erie, and on Jan. 1 he will also serve in that capacity at Lackawanna Presbytery.

When Wayne reflects on his time with the Synod, he’ll remember fondly the team he worked with to help bring a new governance style to the mid council.

“Working with the group that pulled together the Policy Governance Manual, moving us into Policy Governance,” Wayne said when asked about a highpoint during his time at the Synod. “Over the years I have been the continuing presence of Policy Governance – getting it started, writing the manual and so forth.

“Another significant change was going virtual (i.e., Synod staff working from home). We were already moving in the direction of virtual before covid.”

Since the Synod sold its building in Camp Hill, PA, at the end of 2020, a couple presbyteries in the Synod have also done the same in their areas and have implemented a virtual office. It’s a feather in the Synod’s cap to be able to share this experience and success with its presbyteries and see them follow suit.

“We have been doing part of our job of modeling – modeling a different way of still being faithful in our responsibilities,” Wayne said. “Presbyteries are changing more out of economic necessity than anything else.”

Seeing presbytery offices become virtual is just one of the many changes Wayne has experienced in the region since he arrived on the scene at Kiski in 1990 and later began his call at the Synod in 2013. Finding people to do the work in churches and mid councils is an ever-growing challenge, not only across the Synod but also around the denomination.

“A couple of the biggest changes are, number 1, presbyteries find it difficult to find enough horses to pull the wagon,” he said. “There’s a change in fewer installed pastors across the Synod. There are difficulties in recruiting ruling elders to serve as CREs (Commissioned Ruling Elders). And everybody has been experiencing a financial crunch, not necessarily related to inflation but related to fewer people.

“Congregations are decreasing in membership. I think we will see a significant number of smaller membership congregations dissolving or being dissolved in the next few years.” 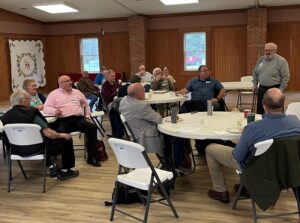 Wayne Yost stands before Synod commissioners at the Synod’s regional gathering at Crestfield Camp and Conference Center in May of 2022.

Despite some possible significant changes down the road, Wayne is encouraged by the work he continues to see in the Synod region.

While Wayne will still be involved in life of the Synod region through his stated clerk work in Lake Erie and Lackawanna, he admits he’ll miss interacting with other presbytery leaders within the Synod’s bounds with whom he has gained a strong relationship during the last nine years.

“I will miss being the wise fool,” he said with a wry smile. “I have enjoyed assisting other clerks or execs in their polity questions and thinking through things. I’ll miss those contacts.”

With the Synod stated clerk position being part-time, as are the new calls in Lake Erie and Lackawanna, Wayne has been able to travel and cross off other bucket list items during the past decade. It leaves him and Nancy with the freedom to do as much – or as little – as they choose going forward.

“I do a lot of online reading,” he said, “from theology to whimsical. I have no idea (what comes next). It all depends on what challenge and opportunity God drops in my lap.”