For almost two years, Chantal Atnip has felt the Lord poking at her. And there was no doubt in her mind about the call she was being drawn to. 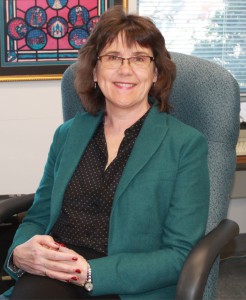 It came in the spring of 2016 during the first leg of a four-day Synod of the Trinity regional trip. Chantal, the synod’s treasurer and Strategic Ministry Support for the past 13 years, was listening to the Synod’s moderator, the Rev. Dr. Johnnie Monroe, open the gathering in Allentown, PA, with devotions that landed heavily on her heart.

“Johnnie was preaching that you can’t put the hand to the plow and look back and be fit for the kingdom of Heaven,” Chantal recalled vividly. “I had a total body, soul, mind experience in listening to him that day. I had a total realization that God is alive, well and acting in the world.”

It was at that exact moment that she felt the urge to stand for moderator of the Presbyterian Church (U.S.A.). With the 222nd General Assembly just a few months away, Chantal knew it was too late to run for the position that year, so she has been carrying this call on her heart for nearly two years.

During the past 20 months, Chantal spent the time discussing the opportunity with past and current moderators and the former head of staff at the Synod of the Trinity, and they helped her affirm the call – something she already knew was a path she needed to go down.

“It was way out of the blue, that I needed to bring that message that we don’t need to be fearful of not having resources,” Chantal said. “We need to be open to what God is directing us to be doing, that we need to act as though we really believe that God is alive and well and in this world today.”

For Chantal, who resides in Hershey, PA, the best way to accomplish that goal was to stand for the moderator of the 223rd General Assembly in St. Louis this year.

“I have been doing a lot of church work, and I have seen our church go through ups and downs,” she said. “I’ve seen the denomination go through a very difficult period of time with congregations leaving over theological issues, and I am convinced that we need a non-anxious presence to encourage people to believe, to be hopeful, to be open to new ideas, to be open to a future.”

Chantal often turns to the Book of Acts as a reference point when thinking about where the world is presently.

“It’s bigger than something I can do at the Synod or in my church. It’s a message that we need to be hearing.”

One thing Chantal vows to work tirelessly on is what it means to be Presbyterian, specifically that people can worship side by side despite having slightly different beliefs.

Aside from being the treasurer at the Synod of the Trinity, Chantal is a ruling elder, clerk of session and former treasurer at Pine Street Presbyterian Church in Harrisburg, PA. She has also served on the church’s board of trustees, helped manage a major capital campaign, volunteered at the church’s soup kitchen (Downtown Daily Bread), taught Sunday school and sung in the choir. She was endorsed by the Presbytery of Carlisle in December to stand for the General Assembly’s moderator position.

Chantal was born in France where her father was stationed in the U.S. Air Force and was named after French saint Jane Frances de Chantal. Her family eventually moved to Vero Beach, FL, and attended First Presbyterian Church there where she was confirmed.

A math major at Florida State University, Chantal worked as a computer programmer/analyst and systems engineer, eventually starting a computer consulting and software development company with a colleague. Chantal and her husband, Robert, a vascular surgeon at Hershey Medical Center, would eventually join Independent Presbyterian Church in Birmingham, AL, before landing in Boston and attending Congregational and United Church of Christ congregations.

A mother of two adult daughters, Chantal continued to do computer consulting and worked as a math tutor and substitute teacher before joining the Synod of the Trinity in 2005.

One thing that Chantal feels sets her apart from others who are standing for moderator in 2018 is that she does not have a pre-set agenda.

“I am not connected to the national church, so I have a different set of eyes and a different voice than the other people who are running for moderator,” she said. “I bring an openness and an ability to cross the different levels of the denomination. I have been asked what I plan to do (if elected moderator). I don’t ‘plan’ to do anything. A moderator is just that – we moderate. We are to be problem solvers.

Chantal announced in March that the Rev. Ken Hockenberry, the interim pastor at Carter-Westminster United Presbyterian Church in Skokie, IL, will serve as her vice moderator for this journey.

Chantal, for one, can certainly relate to feeling that call.

Note: Anyone interested in contacting Chantal about the moderator position can do so by email at treasurer@syntrinity.org.