Thanksgiving comes early for Washington, PA, community through ‘Feeding of the 500’ initiative 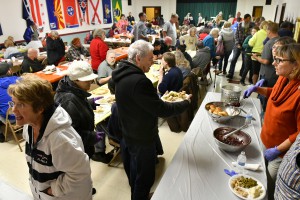 The basement social room welcomes members and friends of First Presbyterian Church 1793 for the free community holiday meal called the “Feeding of the 500” in Washington, PA.

What began as a small outreach that provided a warm meal to a hundred people in the Washington, PA, area two days before Thanksgiving has blossomed into a community-wide event that now feeds more than five times as many people and includes – from the volunteers to those being served – all different walks of life.

For more than three decades, First Presbyterian Church, 1793 of Washington has been preparing a meal on the Tuesday before Thanksgiving, a dinner that is available to anyone who stops by. Complete with turkey, stuffing, mashed potatoes, green beans, cranberry sauce and (of course) pumpkin pie, the congregation donates the food and labor made to prepare the feast that has been come to be known as the “Feeding of the 500.”

“We want to provide community, hospitality, fellowship and give people the opportunity to dine together,” explained Jan Marietta, the dining room coordinator for the outreach. “Some of the people who come to Feeding of the 500 have no family, they have nobody to share a holiday with. We hope in some way we provide that for them.”

The meal is available for two hours in the evening, allowing for two or three shifts to feed 125 people each time. Another 250 meals are available at the takeout window.

“We have people who will come and take to shut-ins, senior citizen centers and places like that,” said Jan, who has been involved with the program for nearly every year of its existence. “For the last five or six years we have been averaging about 525 (meals prepared). I can’t remember the last time we dropped under 400. It’s been 10 or 15 years since we’ve been below 400.”

This year, First Church served nearly 540 meals and had the largest sit-down crowd Jan can remember.

“We joked as we were cleaning up that we may have to change the name to ‘Feeding of the 600,’” she said. “We actually ran out of stuffing and had only about two servings of turkey left out of 24 turkeys cooked.” 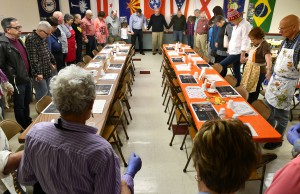 Volunteers gather to give thanks and ask a blessing before the meal is served at the Feeding of the 500 at First Presbyterian Church 1793 of Washington, PA.

Former First Church pastor Burt Campbell brought the idea of serving a community meal to the congregation in the 1980s. Jan, who isn’t sure why Tuesday was picked as the day to serve the meal, remembers the early beginnings of the outreach.

“The first couple of years it was very small,” Jan recalled. “It just sort of happened. People would cook turkeys and potatoes at home and bring them to the church. We opened our doors up and we would have 100 people or so, and that was a big crowd back then.”

As attendance grew, it became necessary to have the turkeys prepared at the church. In recent years, 22 turkeys have been cooked for the Feeding of the 500 meal, roasting that occurs in two shifts on Monday. On the day of the meal, the rest of the dishes are cooked. There is one caveat: the pumpkin pies are all purchased from a local store after it became too difficult to bake them in time for the meal.

The Washington-area food bank helps promote the meal by displaying and handing out flyers, and agencies like the blind and deaf associations as well as Resurrection Power, which provides housing for people who are in drug and alcohol rehabilitation, also make the outreach known to those with whom they serve.

“People in some of the low-income housing areas will come,” Jan continued. “People from other churches come. We have attorneys, politicians, doctors. We have just about everybody. It’s really a nice mix of people. It’s very heart-warming to see a doctor sitting beside a homeless person just sharing a meal.

“We have people that started coming when they were children and now they come back to help us serve once a year. There’s one young man who brings his kids and he said, ‘I grew up coming to this dinner and I want my kids to do it, too.’ They come and help us serve, then they sit down and eat. It’s amazing.” 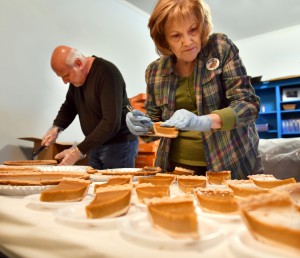 Fifty pumpkin pies are sliced and placed on plates, ready for whipped topping.

The volunteers not only come from First Church and its neighbors but also places like Washington & Jefferson College, which is represented by both students and professors, and organizations like the Boy Scouts that use the opportunity as a service project.

“We don’t have any one person in charge,” Jan said. “We can’t think of any other way it comes together then dedicated people and God’s hand. If somebody can’t do something, we’ve got another person there to do it. It just seems to have fallen into place without any super structure to it. The people that have been working for the last 15-20 years keep coming back. To me that’s God’s hand. They don’t have to.”

The annual meal also serves a secondary purpose: it allows the community to better understand the purpose of First Church.

“It does not bring people to the pews, but it does show that we are a church of open doors,” Jan said. “We will accept anybody, we will help anybody that we can. We do not discriminate. We like to open our doors to everybody.”

And on the Tuesday before Thanksgiving, that’s exactly what First Presbytery Church 1793 does.