The Giving Season: What gifts do you bring? 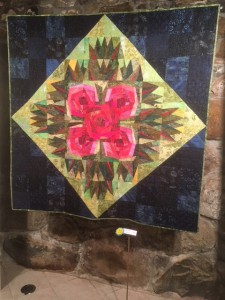 Christmas is the celebration of the birth of Christ, born into this world to save it. Jesus Christ is the Prince of Peace for all. The Magi saw the star above Bethlehem and were compelled to see the wonder of a newborn king who would be the Savior of the world. Whether you follow this star or not, the Season of Giving began with the Magi in the East. What gifts did they bring him? Rare items for that time: gold, frankincense and myrrh. What gifts do you bring? What gifts are you willing to share with others?

On the walls of the business office at the First Presbyterian Church of the Covenant in downtown Erie are works of art made of colorful fabric, both hand and machine stitched, and crafted by JoAnn Peters. JoAnn is the number cruncher at First Covenant; she handles all matters financial. Her skill with numbers and her ability to pay attention to detail supports not only her tasks for First Covenant, but her evolving skill as a fiber artist.

JoAnn started sewing as a teenager and has been seriously quilting for the last 12 years. This past July, she submitted her work to Campbell Pottery for their annual juried art show titled In the Garden. JoAnn had entered pieces in local guilds and craft shows before, but the Campbell Pottery Juried Art Show represented a new challenge for her.

“Well, my sister called to say she was entering one of her pieces in the mixed media category and wanted to know if I had something for the fiber art category. I turned around looking at the piece hanging in my office and said, ‘Well yes I do.’ I didn’t know the show was also a contest. I was really just interested in getting in it and possibly selling the quilt. Once my sister told me that her piece along with a photograph her daughter put in was accepted, I checked my email thinking ‘What about mine?’ Two hours later I got the word that ‘Rose Garden’ was accepted into the show. I was so thrilled that all three of us had something on display. The next day I received another email from the gallery (Campbell Pottery) saying, ‘We are happy to inform you that your entry ‘Rose Garden’ received First Place in this year’s show!’ I about fell off my chair and had to read it several times because I couldn’t believe it.”

Not only did JoAnn capture the top prize, her first-place quilted artwork was purchased by a woman who lives in New Jersey. The buyer was passing through the area and made a stop at Campbell Pottery, saw the quilt and made special arrangements to take it with her. Campbell Pottery, located just south of Edinboro, is a major stop for art enthusiasts and artists alike. Master Potter Bill Campbell has been winning national awards and perfecting his craft for decades. His designs are featured in over 500 galleries across the country. His wife, Jane Campbell, manages the art store-turned-tourist destination and gallery and oversees all the juried art shows held at that location.

When asked about what she enjoys so much about her chosen art form, JoAnn says she finds it very relaxing. “It’s playtime for me. Just the relaxation of handling beautiful fabrics and free motion quilting on my machine. I like patterns with a little challenge. Most of the time it’s seeing the fabric that decides what I will create from it. I usually hang the finished top for a few days to decide how to quilt it. Once I have an idea, I don’t stop until it’s done. I like to keep trying new designs just to see if I can do it. I spend most of my free time at my machine, especially the weekends when I can get two full days of quilting done. I love being able to hang a completed work.”

The photo in this article only gives you a taste of the exquisite work and rich, beautiful colors JoAnn selects for her quilts. In the summer of 2017, JoAnn’s quilted artwork was featured for a time in what has become known as the First Covenant Community Gallery. It’s a space near the office that has been repurposed to bring a variety of visual experiences to those walking by on their way to a class, meeting or worship. This space was included as a stop on Erie’s Gallery Night where area art shops and galleries open their doors and showcase the variety of work from local artists. JoAnn said, “I was excited to have people come and browse and sold many of them that night.”

JoAnn Peters has taken a passion for quilting to a new level and is now an award-winning fiber artist. This journey began some years ago. Yet along the way, she discovered that sharing her talents with others held a certain satisfaction. We’re treated to a visual gift when JoAnn completes her latest project and hangs it on the wall in the office at First Covenant. Thanks for sharing JoAnn.