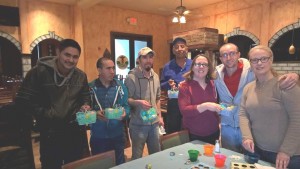 Teachers and students from the Uniontown English is a Second Language class hold up the Easter eggs they decorated during class. The ESL program was organized by Tricia Patton of Third Presbyterian Church.

Combine an English is a Second Language class with a group of faith-based teachers and what do you get? You get a successful program that not only helps immigrants become better equipped to live in this country but also a program that provides many other services to those same immigrants through a subtle Christ-like mindset.

Tricia Patton of the Third Presbyterian Church of Uniontown (Fayette County near Pittsburgh) is leading a team of instructors that is in its second year of teaching English to what is mainly local Spanish-speaking adults. The group has three weekly classes — for beginner, intermediate and advanced students — that reach out to about 15 people per week. But the teachers also take their students to medical appointments and community events in order to help translate for the immigrants. Yeah, it’s not your average English class.

“Our goal was never to be a way to build our congregation,” Tricia said. “This is us serving the community, but there have been a number of families actually get involved with the church, so that’s been neat to see, too.”

The intermediate and advanced classes meet for two hours on Mondays at Third PC. The intermediate class pulls in about 6-7 people while the advanced class has about half of that attendance. The beginner class gathers Mondays and Wednesdays for one hour at a local Mexican restaurant and also involves around 6-7 students. While the majority of the students are of Mexican descent, there have been some who have backgrounds from Puerto Rico and Guatemala, and there are two Japanese women who participate in the advanced class on a regular basis.

Tricia taught English is a Second Language classes many years ago despite not having any formal training. Her volunteer work eventually turned into a hired position that she held for a while before leaving the post. After starting a family, she went back for her master’s degree in ESL because she enjoyed the work so much and it led to a year in Mexico teaching ESL classes. Upon her return to the States, she approached then Third PC Pastor Chris Enoch about starting ESL classes for the Uniontown community. 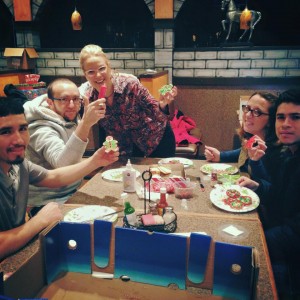 The students from the Uniontown ESL class display Christmas cookies they made in December. Obviously, the language class includes much more than learning English.

“I knew there were more immigrants than there had been historically in Fayette County, but I wasn’t sure we were at the point where there was a need for it,” Tricia explained. “I said (in an email to the pastor) if the only need this is going to fill is my need to feel useful, don’t feel like we need to start this program. This is something I really love to do and up until that point there hadn’t really been a need for it in Fayette County.”

Tricia mentioned the idea to the owner of the town’s Mexican restaurant and when he said he knew at least 16 people interested in the program, she decided to go ahead with the idea of starting ESL classes.

The teaching duties fall mainly on Third PC volunteers, but there are some other community members who pitch in as well. There are roughly 1-2 students per volunteer, and there are others who help with child care so the adults can participate in the class. The ages of the students range from young adults to grandparents.

And then there are the outside-of-class things. Taking the students to doctor and dentist appointments so they can translate is a common practice for the teachers. They also take the students to parent-teacher conferences to help in that aspect of daily life. 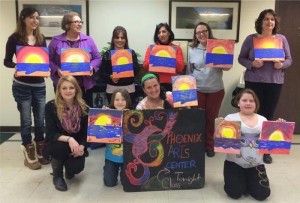 Some members of the Uniontown ESL class participated in a local art program recently. It’s just one example of how the class tries to help the students make a place for themselves in the local community.

“There’s been a couple of families who have needed help with the school system, whether it be understanding the process of moving from junior high to senior high – what are the steps involved, how do you choose your classes, that sort of thing,” Tricia explained. “I sometimes go to parent-teacher conferences to help the parents translate the language and to also help them understand the system.”

It all adds up to a rewarding learning experience that includes a Christian component that isn’t lost on the teachers or the students.

“It’s a place where we can be God-acting in the lives of these people,” Tricia said. “They’re thousands of miles away from the people who love and care about them the most, and so we’re here to let them know they’re not forgotten, they’re not on their own and that God is here, too.

“We didn’t want it to be a case where we were using ESL class as nothing more than a chance to try to drag them into the church. We were trying to be servants. It’s an opportunity for us to serve people who are here lonely and alone and little bit forgotten. They can be a little bit invisible here because some of them are working behind the scenes. They might work in a dish room in a restaurant and work really long hours and don’t have a lot of time for other things. It’s sort of letting them know that they are not invisible in our eyes or in God’s eyes, that there are people who care about them.”

Note: To view the Uniontown ESL’s Facebook page, click here. Anyone interested in learning more about the class can contact Tricia Patton by email at UniontownESL@gmail.com. She would also be happy hear from any other congregations that are running a similar program in order to share ideas.