If no one attends a Sunday morning worship service, does anyone really hear the message? If you ask Pastor Charlie Gross, his answer is a resounding “Yes!” 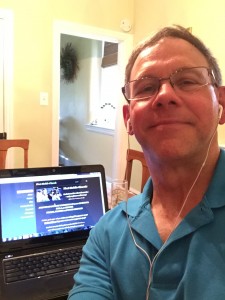 Pastor Charlie Gross delivers a sermon each Sunday by phone from his office at West Grove Presbyterian Church in Chester County, PA.

Charlie is the mastermind behind the First Mobile Church, a weekly service that is conducted through his laptop and cell phone from the comforts of his own office at West Grove Presbyterian Church in Chester County, PA. For a year and a half, he has been reaching out to worshippers via his phone, producing a Sunday morning service that can only be heard through the airwaves. The 9 a.m. service pulls in people from New York to Florida and includes many of the same elements of his traditional 10:45 a.m. gathering.

“It’s such a convenient way to gather and stay in touch,” Charlie said.

The First Mobile Church, which is one of the PCUSA’s 1001 Worshiping Communities, started around Thanksgiving in 2013 with about five callers, many of whom were his own family, and has grown to an average of over 20. Charlie figures on those calls there may be multiple people hearing through one phone and estimates the total listening in on a service is around 30. A toll-free number makes it free for the callers to “attend” who are out-of-state.

As for who exactly is calling in, Charlie said there are a handful of “snowbirds” who travel to Florida every year over the winter who call in on a regular basis. One woman in Florida has a sister living in Pennsylvania and they both call in, allowing them to attend the same service despite living a thousand miles apart. There’s another couple who has a summer home in York County who listen in from their back deck while overlooking the Susquehanna River.

“The target audience is a number of my shut-ins, people who have had strokes or who just can’t get around, and even people in the hospital,” Charlie said. “I have had people who were laid up for a Sunday or two and as long as the doctors and technicians aren’t bugging them, they can call in and attend church from the hospital bed.”

Charlie came up with the idea for a Mobile Church one day when he was thinking about what people are doing on Sunday mornings instead of going to church. He pictured people walking their dogs in the park or exercising and it came to him that every one of those people probably has a cell phone on them.

“If our goal is to go to the people rather than drag them in to the churches, how can I go to the people and combine what they love to do and worship?” he thought. “The phone is the common denominator here. Everyone carries around a phone.

“The U.S. national stance is someone standing there looking at their cell phone,” he continued jokingly. “I thought, ‘I’ve been doing conference calls for a long time. Why not do worship over a conference call?’”

The advantages of having a service like this are many, and the fact that things like the ability for those who called in to chat among themselves beforehand and for those same people to also offer up prayer requests keeps the service consistent.

“There are a couple of advantages to it,” Charlie said. “One, since you’re on a phone, you can make it personal. You’re live, I can talk to you, which is what we do, we make it personal. Secondly, it’s designed for low-tech. You don’t need a wifi, you don’t need internet access, all you need is a phone. You don’t even need a long-distance plan because I have an 800 number.”

Shortly after 9 a.m. once everyone has dialed in, Charlie mutes the other callers and begins the service. With the help of brothers Walter and Joe Snyder, who are also working from their home, recorded music is played for the worshippers. The music can be from artists like Johnny Cash or Alan Jackson and played without copyright concerns due to a worship exemption law that Charlie uncovered.

The service continues with prayer requests that Charlie usually limits to about 5-6 people in order to stay on schedule. In the event that there are more prayers requests to be heard, he will stay on the phone after the service and address those prayer concerns. The sermon he delivers next is the same as the one he preaches to the roughly 70 people who attend the more traditional service later in the morning.

There obviously is no offering taken during the service but people do send in donations to help cover the cost of putting on this service. The toll-free number is 4 cents a minute for people to use, which ends up costing West Grove PC between $40-$50 a month to run the First Mobile Church.

Charlie is believed to be the only person doing a worship service this way, making him a one-of-a-kind cell-evangelist, so to speak. He is going to great lengths to try to get the word out there about his First Mobile Church but hasn’t had any takers yet. His story has appeared in the local newspaper, he’s written a first-person piece in thePresbyterian Outlook and has taken out a classified ad in Presbyterians Today magazine to try to get other ministers to pick up his idea and run with it.

“I feel it’s a useful way to stay in touch,” Charlie said. “Garrison Keillor’s final message is ‘Be well, do good work and keep in touch.’ Keeping in touch is so key anymore in relationships in church, and even family relationships. I think it might be useful for some people.”

Taking the word of God out into the streets is a fundamental principle of the Bible. It’s also what Pastor Charlie Gross is doing with the help of a cell phone every Sunday morning, reaching people both near and far.

“God’s Sovereign hand is behind every aspect of First Mobile, from his word that I read and preach to his word that I study all week long, even to who he draws into the service,” Charlie said. “God is also behind the various people who help promote it and write about it. God is active in imaginations as He gifted me with the idea, gifted Alexander Graham Bell with the telephone invention, etc. God is active in every aspect of this service, even in the various artists we use for music.”

Note: Anyone interested in launching their own conference call worship service can contact Pastor Charlie Gross at (717) 468-1568 or email cwgross@gmail.com. More information here.