Rhythm of the Synod

It’s a common response for non-Christians to look at a catastrophe and ask, “If God is all-powerful, why would God allow something like that to happen?” Christians will respond to crisis in many different ways, including with the rationale that something positive will eventually come out of those horrible situations. In a very small way, “something positive” in the wake of a tragedy is exactly what occurred during the summer Synod of the Trinity Assembly Meeting in State College, PA, in late June. 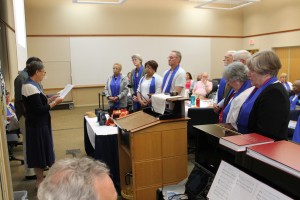 The eight commissioners who were nominated to serve on the Governing Commission by the Executive Advisory Team were recognized during the Synod Assembly Meeting.

The week before the Synod Assembly meeting, a shooting in a Charleston, S.C., church took the lives of nine black men and women during a Bible study in what is the latest in a string of gun violence involving whites and blacks. With that tragedy still in everyone’s thoughts, civil unrest and what are congregations called to do to help combat the issue was the overwhelming topic of discussion during the two-day Synod meeting. Setting the tone for the talks were powerful opening remarks from Synod Moderator Barbara Chaapel, who said “We, even the church, are part of this world of violence and hatred. Yet we as followers of Christ are not fully of that world. We follow a different path, the path of love. How do we live as followers of that path in a world where these acts are our present reality?” (Read Barbara’s opening statement by clicking here.)

Asking that the entire two-day meeting be a prayer for the lives that have been lost in places like Charleston and Ferguson, Mo., Barbara’s stern challenge filtered into many discussions throughout the Assembly Meeting. During roundtable talks later in the day, the commissioners who were on hand were asked to describe what they see in their presbyteries regarding race relations and wonder what Jesus would have them do in this time of civil unrest and continued gun violence. The afternoon discussion concluded with an emotional prayer from Vice Moderator Johnnie Monroe, who also commented that, “We have not learned how to put Jesus’ teaching into our lives. We talk it but we don’t walk it.” 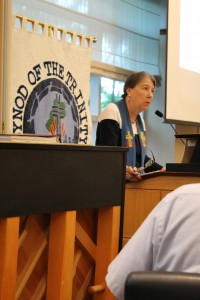 Moderator Barbara Chaapel delivered a powerful opening statement in response to the recent gun violence that rocked a church in Charleston, S.C.

Commissioners also spent time at their tables conversing about other “visioning” topics, which is all part of the new Policy Governance model the Synod of the Trinity adopted at its Winter Assembly Meeting in March. Part of the “visioning” focus was explained in a video titled “Everyday Creativity” by National Geographic photographer Dewitt Jones that helped show how, like in photography, one subject can be turned into a totally new scene by just changing the perspective. He urged people to “reframe a problem into an opportunity” and to turn a “win-lose situation into a win-learn situation.” (View video here.)

(Who are the people on the Governing Commission? Find out by clicking here.)

Monday afternoon included a first reading of the Standing Rules revision and a lengthy discussion on whether the Synod Moderator should be elected for one- or two-year terms. An unofficial “straw vote” showed that the majority of commissioners would like the moderator to be in place for two years. Mike Givler, the Synod’s Communications Coordinator, gave a 300th anniversary update and is seeking historians to help in the gathering of information for the celebration that will begin in the fall of 2016. (Read Mike’s script here and view his PowerPoint presentation here.) A budget report from Synod Treasurer Chantal Atnip and Doug Portz concluded with the passing of a motion to increase the per capita giving by 10 cents, raising the figure to $2.30 per church member in 2016. It’s the first such increase in five years. 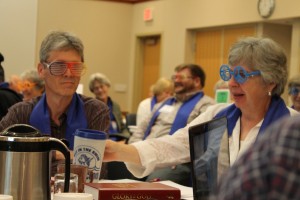 “Visioning” was a key component to the two-day Synod Assembly Meeting, so commissioners were asked to see things in a different way.

Monday evening’s activities included a presentation from Krislund Camp and Conference Center directors Gene Joiner and Ashley Miller, who promoted their traveling day camps. (Read about the camps here.) Teaching Elder Gary Lyon (Kiskiminetas) delivered the night’s sermon at a worship service. Ben Hooper (Ruling Elder, Lehigh) graciously baked the bread for the communion that was included in the service. An offering to benefit the Ernesto Badillo Fund for Church Administration was held and $1,080 was collected, with the Synod matching $1,000 of that to support the fund the longtime Board of Pensions representative established before he passed away in April.

The service and the entire two-day meeting included music from pianist Ned Wetherald, the Director of Music Ministry at nearby State College Presbyterian Church. Ned played entirely from the new PC(USA) hymnal “Glory to God.” The evening concluded with a commissioning of the Governing Commission. As part of the ceremony, they were presented with special crosses to pin on their commissioner stoles to distinguish them from the other commissioners. 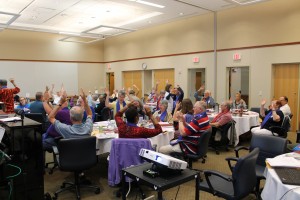 Singing was a vital part of the Synod Assembly Meeting, including this interactive clapping song, which was the only one that did not come from the new Glory to God hymnal.

Tuesday opened with devotions from Synod Transitional Executive Susan Faye Wonderland and was followed by a Mid-Council Report from David Oyler (Executive Presbyter, Lake Erie) that included roundtable discussion among the commissioners regarding living in an “attractional” and “open set” world. Dianne Kareha (Teaching Elder, Lehigh) presented a segment on the Peace & Global Witness Offering, which is held annually on World Communion Sunday on the first Sunday in October. Free materials about Peace & Global Witness can be received through the Presbyterian Distribution Service (800-524-2612). A church in standing order will automatically receive materials.

Pittsburgh Presbytery’s Young Adult Advisory Delegate Faith Bailey spoke regarding an upcoming middle school retreat at Crestfield Camp & Conference Center that will focus on “A Faithful Response to Bullying and Suicide,” which is slated for two weekends in November. Prior to adjournment, a committee was named for the purpose of nominating the Synod Moderator and Vice Moderator for 2016. Named to that committee were Jean Kennedy (Ruling Elder, Pittsburgh), Sean Hall (Teaching Elder, Shenango) and Yvonne Lewis (Racial Ethnic Ruling Elder, Lehigh).

Note: The docket and related paperwork can be found here.