Revitalization. It’s a common word used these days surrounding many churches and church organizations. Numbers are in a decline, and leaders are looking at ways to boost attendance and energy in order to survive.

During the summer of 2014, Krislund Camp and Conference Center seems to have found a way to help itself in this cause and at the same time provide a lift for the churches – both Presbyterian and neighboring – in the three-presbytery area (Carlisle, Huntingdon, Northumberland) in which it serves. Behind new director Gene Joiner, the 875-acre camp in Madisonburg, PA, has re-created itself through a unique program called Traveling Day Camps that brings Krislund’s staff to churches for what Joiner called “camp in a bag” and described as “Vacation Bible School on adrenaline.” 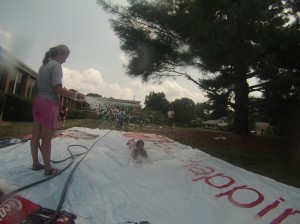 Campers enjoy a water slide during an afternoon of fun at the Krislund Camp and Conference Center in Madisonburg, PA.

With numbers being down for camps at Krislund, which translates to “Christ’s Land,” Joiner decided to try something that he had used in Alabama where he was a camp executive director for five years before taking over the central Pennsylvania camp on Dec. 1, 2013. The idea was to take camp activities and staff to the churches and provide activities for the youth there, then bring the campers back to Krislund at the end of the week for an overnight stay in order to get them acclimated to the camp and hopefully make them comfortable and excited enough to attend future activities at Krislund.

“Really what drove the idea was a conversation I had with a pastor that was just struggling with no young families to get in their church and they were really just trying to meet a need,” Joiner said. “And that’s one thing we were trying to do. We can meet that need. We have young college students who love Jesus that are good at camp, being crazy.

“We wanted to change the mentality that camp is more than just a facility. We’re a program, and we’re a springboard of ministry to the church. Instead of expecting the churches to come to us, we have the tools and resources to help them where they’re at.”

And the summer experiment seemed to work like a charm. It involved the Krislund staff coming to a church with its activities but also needing the participating church’s volunteers to provide support for the camp.

“It’s a true partnership in a way that we are requiring each church to give volunteers,” Joiner said. “The idea is that the children are building a relationship with people in the churches that are in the trenches, that are in the community. That’s a great opportunity for the church to meet a need for families. The more and more we talked about it we realized that child care is a need of all young families, and if the church can provide that through the camp staff and a Vacation Bible School on adrenaline type of program that is meeting a need and also providing a service for families that they realize ‘Hey, the church is important in my life, maybe I need to attend there.’”

The way it works is a Krisland staff arrives at the participating church on a Sunday night to meet with the volunteers for team building, staff training and go over the schedule for the curriculum. The kids attend during the day from Monday through Wednesday, then Thursday morning they would do an activity at the church before leaving with the church’s volunteers for Krislund. After an overnight stay at Krislund, the volunteers drive the youth back to their church on Friday afternoon to be picked up by their parents.

Mark Englund-Krieger, the executive presbyter at the Presbytery of Carlisle, felt the uniqueness of the Traveling Day Camps firsthand since many of the churches in his presbytery are not located near Krislund.

“Particularly in the Presbytery of Carlisle, our ministry at Krislund always has the challenge of overcoming the long distance to Krislund,” Englund-Krieger noted. “The traveling day camp is truly an opportunity for our camp to come to you. By bringing our summer camp staff and programming to our local churches we create a fabulous win-win situation. The churches win by having a fantastic summer program opportunity. Krislund wins by introducing more kids to our ministry who may not have the opportunity to travel to the camp.” 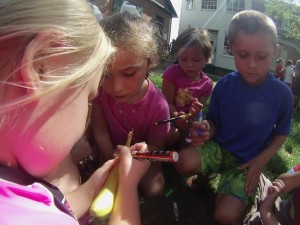 Krislund campers participate in the “Banana Olympics” as they try to decorate the best banana.

Joiner sees a similar upside to the camp on wheels.

“The potential to bring in new residential campers is amazing,” Joiner said. “When the volunteers come up, it may be their first opportunity to see Krislund and experience what we are. … They’re all connected to sports teams or non-profits or their jobs and it just opens up more opportunities for groups.”

The curriculum taught at the Traveling Day Camps was the same as the one being delivered at Krislund, so when the group traveled to Krislund at the end of the week, all of the youth were on the same page.

Despite the portable nature of the Traveling Day Camp, the week-long event is affordable, to the tune of about $65 per camper. And some churches even paid for the camp themselves, making it free to the participants. Helping to offset the total cost of the Traveling Day Camp was a $75,000 New Initiatives Grant that Krislund received through the Synod of the Trinity. If a church couldn’t pay for the entire camp, that grant money helped fund the program.

The feedback has been very positive. Of the six Traveling Day Camps that were performed this summer, every one of those churches has signed on for the same event next year. In 2015, Joiner is hoping to put two teams per week (from June 15 to Aug. 14) on the road and provide between 16 and 20 TDCs. He also pointed out that Presbyterian churches can partner with other congregations for the camps, and the secondary church(es) don’t have to be Presbyterian.

“We’re impacting our churches, but we’re also impacting the community, and that’s really exciting for us to be able to be part of that process,” Joiner said.

Some of the Traveling Days Camps took the place of a church’s Vacation Bible School, but most either purposely came about a month before or after a church’s VBS as either a launch or follow-up program.

“It’s a shared responsibility,” Joiner said. “One person doesn’t have to do everything. … (The churches say) ‘Somebody’s here to help us. We don’t have to know all the fun, crazy songs and do all the run-around. We can have the college students come and do that.’” 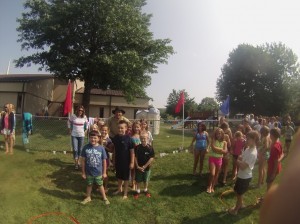 Two teams of campers get lined up prior to an activity at Krislund this summer.

William Knudsen, the executive presbyter and stated clerk for the Presbytery of Northumberland, also noted that the staff at Krislund made a difference with their enthusiasm and actions.

“This is a new and innovative way of bringing the Krislund experience to our local communities to young people who might never experience the joy and the comradery of a Christian camp,” he said. “I was impressed with the quality of the Traveling Day Camp staff that provided outstanding leadership for the local volunteers who helped with the day camp and their deep commitment to our Lord and Savior Jesus Christ. I could tell this was not just a summer job for these young men and women, but it was a fulfillment of a call that God had placed upon their lives to share the good news of Jesus Christ with a new generation of young people here in Northumberland Presbytery.”

The bottom line is it helped a church either revitalize its summer program or add to it and hopefully gain some momentum in the participating congregation.

“I think our churches are realizing there is a need of young families and (the) young,” Joiner said. “There’s such a gap of young families not coming to the church, and we’re losing college-aged students from the church that I think churches are realizing that we’re missing something. There’s a gap. There’s somewhere that we’re not connected to families. I think it’s just a great opportunity that young blood and young college and high school students and camp staff are able to come in and build that excitement for the church and just be a shot in the arm of excitement.”

Note: For more on the Synod of the Trinity’s New Initiative Grants, click here.