A president has attended worship there. Ten other churches have spawned from it. And for 300 years, it has survived wars, depressions and even a building-leveling fire that would have caused numerous other entities to close their doors.

But Abington Presbyterian Church has flourished despite any obstacle that has come its way. That in itself is cause for celebration, but when one considers that the lifespan of the congregation covers four centuries, throwing one party to commemorate Abington’s anniversary just didn’t seem like enough.

That’s why the congregation located north of Philadelphia is spending all of 2014 celebrating its 300th birthday. From building a log cabin on its property to hosting a 5K run/walk to mission trips to Montana, Abington Presbyterian Church is pulling out all of the stops to make sure it honors the significant milestone properly. 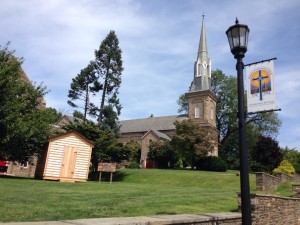 A replica “Log Church” sits in the shadow of the current Abington Presbyterian Church near Philadelphia. The log building was constructed in honor of the first building that housed the congregation nearly 300 years ago.

“It’s been the most intense year of activities I’ve ever been through,” Rev. Brent Eelman said, adding that the church has been planning activities for three years and booking guest preaches for nearly four years. “I’m almost overwhelmed with what we’ve done so far, what we are continuing to do because there’s just been so many things.”

Among the eye-catching activities Abington Presbyterian Church organized for this year were the construction of a replica log cabin church in the corner of its property, one that commemorates the building that housed the first congregation nearly 300 years ago, a 5K run and walk and a pair of mission trips to Montana. The entire church – not just its music groups – was also on the field to sing the National Anthem at a Philadelphia Phillies baseball game in July.

An activity planned for the fall was the “300th Anniversary Block Party” on Sunday, Sept. 7, that involved sending out worship service invitations to everyone within 100 acres of the current building – the size of the property of its first preacher’s land where the original church building was constructed in 1719. Eelman said 1,000 hot dogs were ordered for lunch that day, which included a sermon from when the church’s second preacher, Richard Treat, was installed in 1731, a sermon that was later published by Benjamin Franklin.

“Part of that (the celebration) is to get our story out to the community and let them know that we’re here and that we’re a church for them if they wish,” said Eelman, who is in his 14th year at Abington. “There’s an evangelism outreach part to it, too. We’ve had mission components to this year. Each one of the projects, if it involves any kind of offering or money, it goes toward a mission project. We tried to not have this be about ourself.”

The book also says that in 1719 Jones sold a half acre of his property for $25 to the trustees of the church to build a meeting house. “This building was of logs and remained until 1793 when a more substantial building was erected,” the book reads, and according to Eelman the original indenture for the land was signed by Ben Franklin. So in honor of this first church building, Abington Presbyterian decided to build a “Log Church,” as it was known at the time, on its property. Construction was originally planned to start in January, but cold weather and snow delayed the plans until April, enabling the building to be christened with an Easter sunrise service instead. 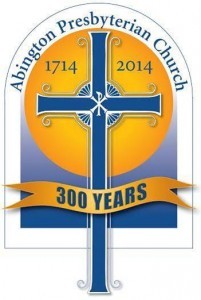 The Tent Service also included a sermon from the Rev. George Whitefield, who was one of the most widely-recognized people during the Colonial times of the 1700s because of a series of sermons he delivered that were known as the “Great Awakening.” Whitefield spoke at Abington on two occasions, just one of several famous people who have graced the Abington pews. That list also includes President Benjamin Harrison and U.S. Postmaster General John Wanamaker, who also founded the Wanamaker department stores. Wanamaker, who was a member of the church, built a chapel in memory of his daughter that later became Grace Presbyterian Church in Jenkintown and also bought a bell for the Abington church that still stands following a fire in 1895 that leveled the church building.

More recently, Vice President Joe Biden’s wife, Jill, who went through the confirmation program and youth fellowship at Abington, had her mother’s funeral at Abington during the presidential debate season of 2008, bringing dignitaries such as John Kerry to the church.

The church averages close to 300 people for its two Sunday worship times – called Simple Gifts and Celebration services. Because of the poor winter weather that kept people indoors, plus a minor fire in the building earlier this year, Eelman couldn’t accurately predict how much attendance has been affected by the year-long celebration.

“Energy level, way up. Participation level is way up,” Eelman admitted. “I would say overall we’ve seen a boost in participation and in energy level. Worship attendance, simply because of the Sunday weather issues that we’ve had, I would say is probably up but I’m not sure how significantly.” 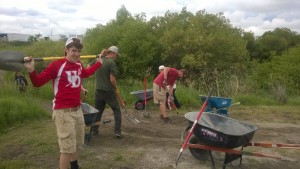 Josh Fitch, left, takes a break during construction of a fire pit during the Abington Presbyterian Church’s youth mission trip to Montana this summer.

The church, which boasts its own symphony orchestra and a graded choir program, also used the celebration to help upgrade its Moller pipe organ. A $600,000 campaign last fall centered around refurbishing, rebuilding and enlarging the organ.

One revelation that came out of this year’s celebration is that the Abington church was used as the model for one of the buildings in the HO train set in the early 1950s. A man donated his replica Abington building to the church, and it is now on display there. Eelman suspects that one of the artists for the train set lived in Philadelphia and used the church as his inspiration.

That’s just one of the eye-opening things that has happened to the congregation during the past year. But for Eelman, the best thing that has occurred isn’t linked to a log house or trip to Montana or a new organ.

“What’s been most exciting for me is that a whole bunch of things happened without me being behind them pushing and shoving and yelling and screaming,” Eelman said. “I think a lot of people just bought into the vision and started to run with it. And what emerged during the celebration that for me is the most exciting thing is to see new leadership emerge in this congregation. People see what they could do, come up with an idea and see it through. And that’s been the most exciting thing for me.”