“I’m inviting folks to be willing to take a relational risk. In other words, find a way to step out into the community and into the unknown and just love on people and be available in places of need and see what the Holy Spirit does with that.”

This is the challenge the Rev. Ralph Hawkins is putting on the churches in the Presbytery of Shenango where he has taken over as both the Executive Presbyter and Stated Clerk. Formerly a pastor within the presbytery at New Wilmington (PA) Presbyterian Church for the previous six years, Hawkins took over his new duties at Shenango on June 1. 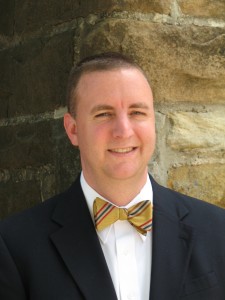 In a few ways, Hawkins’ new duties are a bit unique in that he has taken a job as the Executive Presbyter in his own presbytery and that he is not only the new EP but also becoming the Stated Clerk as well. Those two things are not rare, just slightly uncommon.

Hawkins has taken the EP duties from David Dawson, who retired from the post in February after 22 years of serving in that capacity. As for the Stated Clerk, Jerry Mahaffey was in that position in a part-time role before stepping away after 27 years.

Doing both jobs will be a challenge for Hawkins, but it’s not his biggest obstacle. With some 17 churches exiting the presbytery for various reasons during the past two years, Hawkins hopes to stem the tide on that exodus.

“It’s taken a fair amount of energy, and I think there’s a sense now in our presbytery that we want to move forward, we want to recalibrate,” he said about losing one-third of the churches in his presbytery and about 25 percent of the people. “I’m very much committed to that. I took the call knowing (what was happening). I was wide-eyed about what was facing us.

“I’m committed to helping the presbytery find its legs again (and) move forward, working with council and the whole body to keep the focus on mission and ministry.”

Hawkins feels the best way to accomplish that goal is through fellowship, togetherness and ministry.

“I’m a big believer in community,” he said. “I’m really a believer in officers and leaders – in our case as Presbyterians teaching and ruling elders – at least spending time together, knowing one another and praying and worshipping together.

“We’re mourning some losses. This has not been an easy time. … There’s not been high levels of conflict around these dismissals, but we grieve them.”

One thing Hawkins feels the Presbytery of Shenango can turn to and build on during this rough patch is its international missions. The presbytery has a 20-plus-year relationship with presbyteries in Sudan, Africa, and the Dominican Republic, positive energy that Hawkins feels will guide Shenango during this time.

“One of the things I love about Shenango is that we have a lot of historic international connections and partnerships,” Hawkins said. “There’s a real sense of importance of staying connected to the global church and Presbyterians and far-flung places. Now more than ever those connections are important.”

Hawkins is also committed to “neighborhood ministry,” which he defined as an opportunity for churches to re-engage with the people near them and have congregations “relax a little bit on their concerns for growth and survival and instead make themselves available to their neighbors.”

One area where Hawkins would like to see his presence felt is to advocate for the role of elders and deacons. He’d like to increase the ministry practice of those officers, especially the latter, in the church setting.

“Let’s equip and turn our deacons loose in our congregations,” he said, adding that he’d like to see them in places like hospitals and homeless shelters. “There’s this incredible tradition of ordination, and I so frequently find we don’t live into it.”

While Hawkins has only been on the job a few months, he is already enjoying getting out to the churches in the presbytery and spreading his faith and message.

“I love to preach, and I’m enjoying preaching in our congregations,” he said. “It’s a privilege to be in someone’s pulpit and to bring a common message that isn’t really about ‘Let’s band together and survive.’ … It’s a message of ‘Let’s take some spirit-filled risks and see what happens.’”

Hawkins is planning to head overseas to Egypt in November for a trip to help celebrate the 150th birthday of the Protestant Evangelical Seminary, which has deep connections to the Presbyterian church. He would also like to meet with some of the presbytery’s partners in Sudan while he’s over there.

Simply put, Hawkins is trying to practice what he’s preaching and feels that it’s an exciting opportunity to be in the position he’s in.

“It’s a really interesting time in the PCUSA,” he said. “I really think our much-touted decline is causing a lot of people to sober up and make some better decisions and realize we’re not as important (nationally) as we used to be. … I’m convinced that that in many ways will be redemptive in the long run. There’s some interesting things happening, and I’m certainly committed to seeing those things through.”