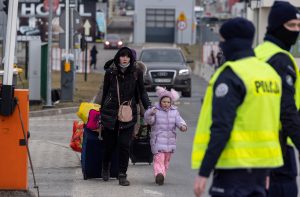 A Ukrainian woman and her daughter are among those arriving at the Polish-Ukrainian border crossing Medyka. Here, the refugees are provided with warm food and clothing. From here, they are transferred by bus to large cities and collective shelters. (Photo courtesy of Frank Schultze)

Ellen Smith is a mission co-worker for the Presbyterian Church (U.S.A.), serving as a regional liaison for Central and Eastern Europe. Now based in the United States, Ellen lived in Russia for 10 years, which is part of her region of service along with Ukraine, Poland and Belarus. Her knowledge and love for that area and its people have made the war that is occurring there particularly heartbreaking.

“This is an unbelievable eruption,” she said. “It’s something so terribly violent. Cities have been decimated and civilians have been targeted and killed. It isn’t rational. Ukraine is not a threat to Russia. Ukraine is caught in the conflict between East and West, and Ukraine is being destroyed.”

For two weeks in March, Ellen spent time in Germany, the Czech Republic and Poland to visit church partners engaged in ministry with Ukrainian refugees, those who have fled their war-torn homeland looking for safety and shelter.

“I tried to identify for our own church other potential partners as we look at how to direct support to the most needed areas to the refugee outreach,” Ellen said.

It’s a staggering scene in these areas right now as Ukrainian families are looking for housing in a foreign country.

“There are over 3 million people who have left and are refugees at this point,” Ellen said. “As the war has moved across Ukraine, more and more people have left. It takes days now to get from the eastern-most border to the western border. We have partners in western Ukraine, and the church there is receiving people. Some travelers can’t go on, so the partners are providing for them where they are, now IDPs (internally displaced persons). The church is also helping people cross the border into Hungary.

“Refugees are crossing into Moldova, Romania, Hungary, Slovakia and Poland. The larger numbers are going to Poland because it’s closer to Kyiv and it’s a northern access point. Men are not allowed to travel across the borders, so it’s women and children and maybe elderly grandparents. It’s a vulnerable population.

“Many, after they get to places like Poland, are moving on to Germany. Germany is flooded with refugees right now. The numbers are just overwhelming. Mostly they’re going into Berlin and Berlin is trying to manage thousands and thousands of people. They try to find ways to move them on to other parts of Germany.” 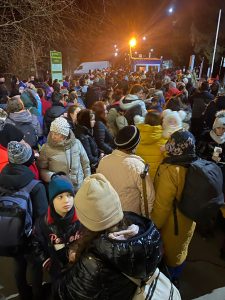 Thousands of refugees from across Ukraine are desperately trying to get to safety in other countries as the war in Ukraine engulfs their home. ACT member Hungarian Interchurch Aid is working at the Hungary/Ukraine border to provide relief to refugees arriving there. (Photo courtesy of HiA)

How long this war will last is anyone’s guess, and what the future holds for the refugees is when the fighting is over is also a mystery. Ellen has her wish for Ukraine as she looks forward, but whether it will happen is yet to be determined.

“I know that people want to go back to Ukraine, it’s a question of what will be left?” she said. “So many places are being destroyed. What will there be to go back to is the question. My hope is that Ukraine survives as an independent country.

“The issues are enormous for everyone involved – Ukrainians and everyone receiving them. They’re receiving them with great kindness and great support, but this is a long-term thing. If the war ends tomorrow, it’s still a desperate situation that needs to be addressed because so much has been destroyed in Ukraine.”

Despite the mass casualties and damages to the cities and towns in Ukraine, Ellen can find a small, silver lining to the events that are occurring there.

“This war has unified Ukraine in ways that I never expected,” she admitted. “Ukraine is a country with three different language groups, with two orthodox churches that have been in conflict for many years, both Greek Catholics and Roman Catholics, as well as wide varieties of the protestant churches. This is a country that has so many divisions, but this war has unified them.”

Even though there are many Ukrainian communities in the United States, it’s unlikely the country will be overrun by refugees because it is simply too far from their home country, Ellen said. And even if the U.S. does see an influx of Ukrainians looking to live here, she feels it will be perceived much differently than when others made their way to America.

“It would not be like the other refugee crisis,” Ellen said. “There are issues. We have not received people as readily from countries like Syria and Afghanistan as I think we would from Ukraine. The response has been generous to the crisis in Ukraine. People’s hearts are responding, their wallets are responding, but there are other conflicts in the world that we have not responded to with this generosity. Without question, Ukraine is being destroyed. The needs there are staggering, but there are other places in the world that need our generous response, too.

“We have had people come to the U.S. from other parts of the world. We have a fear in our society of people of color and people of different faith and cultural traditions. I think that Ukraine feels closer culturally, and they’re white.”

What the future holds in Ukraine is anyone’s guess. There is plenty that needs to be done now and in the future. First the war must end.

“This is where we need to be praying,” Ellen said.

The PCUSA has various giving platforms where people and congregations can donate to help support its humanitarian response to the war. Identifying where these funds can be used was part of Ellen’s trip to Europe in March.

“It’s about listening to our partners who are doing the work,” she said. “I went to listen, not to do. The partners are the ones who are receiving and caring for the refugees. I went to see and gather information. This is the beginning of what will be a long-term crisis. People have been generous to PDA (Presbyterian Disaster Assistance). The response will evolve from emergency response, as partners respond to the mass influx, to a middle stage of identifying and responding to the needs they see as they get to know the refugees, and there will be other stages beyond. At this point we need prayer and the funding to help the partners who are doing the work.”

To support Presbyterian Disaster Assistance, which is working with ecumenical partners that are dealing with the humanitarian crisis in countries bordering Ukraine, click here.

ACT member Hungarian Interchurch Aid is providing support to refugees fleeing the war in Ukraine on both the Ukrainian and Hungarian side of the border near Berehove. (Photo courtesy of Håvard Bjelland/NCA)