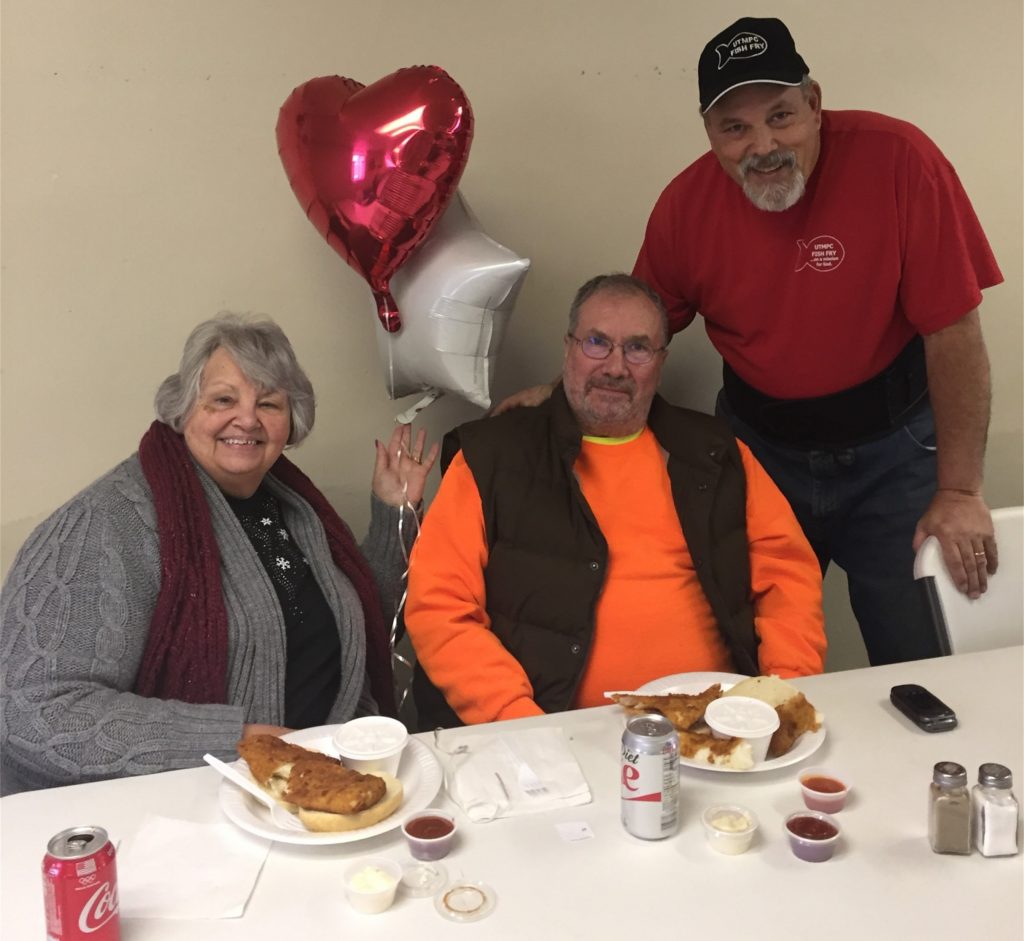 Former pastor at Upper Ten Mile Presbyterian Church, the late Larry Deemer, stands with the customers who purchased the 100,000th fish sandwich. Larry was instrumental in starting the annual fish fry, which has now made more than $360,000 for area missions.

It’s a little-known fact that southwestern Pennsylvania is a hub for fish fries. In fact, a Google search revealed that nearly 250 churches, businesses and civic organizations in the Pittsburgh area were listed as either having a fish fry this year or having held one in recent years. That’s a lot of cod for God.

Upper Ten Mile Presbyterian Church in Prosperity, PA, (Washington Presbytery) has been holding a fish fry during Lent for 16 years, in the process generating more than $360,000 for missions since this annual outreach began.

“We’re very happy with how things are going,” said Eric Cowden, one of the organizers of the Upper Ten Mile Church fish fry. “It’s about leading by example. This is good work being done for a good cause for good reasons. People are being very supportive.”

Started as a way to rase funds for local missions in 2005, the annual fish fry is held on eight consecutive Fridays during Lent, starting with the Friday before Ash Wednesday and running until Good Friday. The church prepares between 8,000-9,000 meals a year, which consists of two cod filets, a bun, French fries and coleslaw. This year that meal, which is served from 11 a.m. to 6 p.m. to attract both the lunch and dinner crowds, sold for $13.

“We have a lot of businesses that come at lunch and order 20-25 meals at a time,” said Eric, who is an elder on session as well as the pianist and choir director at Upper Ten Mile Church. “We’re real blessed with that kind of activity to have the local support.

“It’s unbelievable how so many people… their bill is $15, and they hand you a $20 and say, ‘Keep the change.’ It happens time after time after time, and we’re very grateful for that.”

Last year, the fish fry had to be cut in half to just four weeks as the coronavirus pandemic caused Upper Ten Mile Church to halt its production in mid-March. But that didn’t stop people from being generous with their giving. 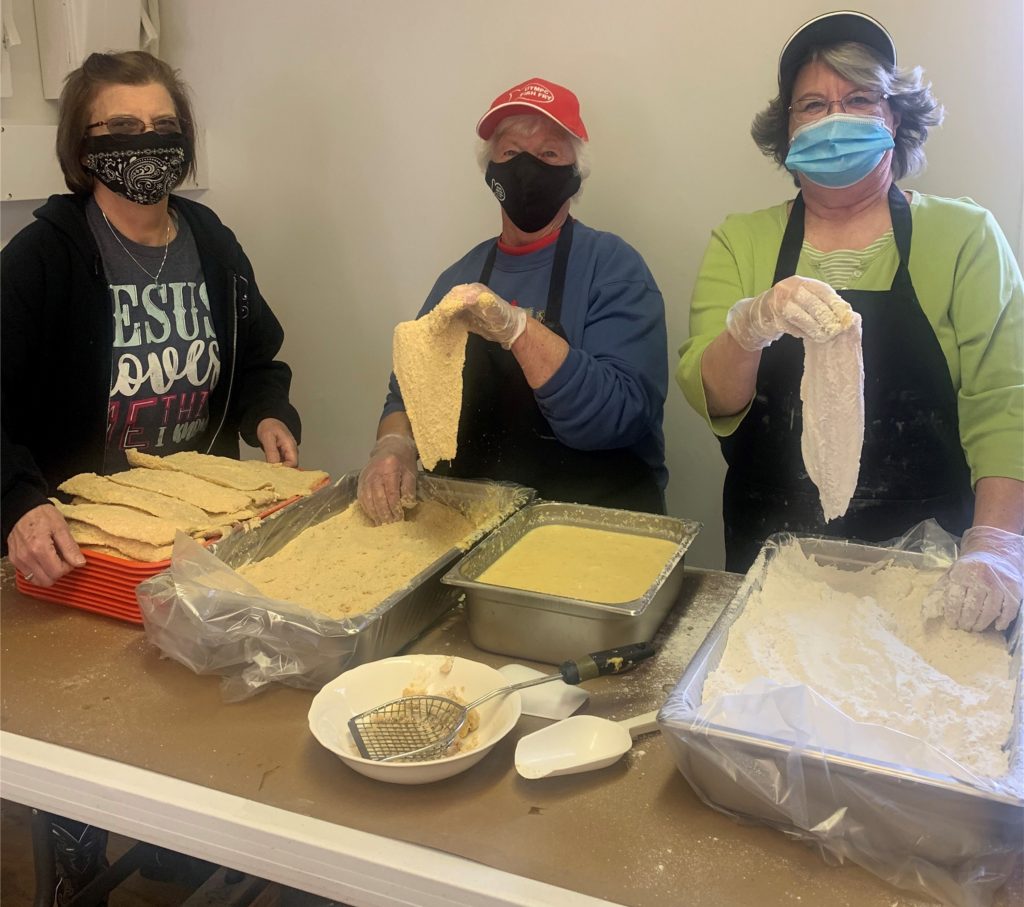 “One company that has been there from the beginning gets 25 meals every week and they pay on the first week for all eight weeks of the fish fry,” Eric explained. “Last year during covid we only had four of our weeks, so we tracked them down to return their money. They would not take their money back. That’s the kind of good that’s happening with this. It’s a community effort. We have a great community that supports us.”

The coronavirus is just one obstacle the Upper Ten Mile Church had to overcome recently. In the fall prior to the 2019 fish fry, long-time pastor Larry Deemer, who helped start the outreach, passed away tragically.

“It was an awful time for our congregation, our church family,” Eric recalled. “When we got through the Christmas season and got into January and February, everybody knew we were to move on, to march on with this activity that meant so much to him. He was really a mission-minded minister. We moved forward but that took a lot of prayer, a lot of strength to do that because there was clearly something missing.”

The beneficiaries of the proceeds from the fish fry range from the nearby City Mission in Washington, PA, and the Salvation Army there to local people who suffered a loss through a fire or accident. The church also annually takes a summer mission trip to help rebuild in areas like West Virginia that have been damaged by flood waters. Proceeds from the fish fry also fund that outreach.

“Our fish fry is all for mission,” Eric noted. “This has nothing to do with the lights of the church, so to speak. This is 100 percent for mission.”

The cod arrives frozen to the church on Mondays and it is thawed and hand-breaded on Friday mornings, the day of the fish fry. A crew also comes in Thursday night to prepare the coleslaw, and there’s a group that arrives Friday night to do the clean-up. Half to two-thirds of the meals are for those who phone in their orders, and the remainder are for the walk-ups.

While those in need are certainly uplifted by the monetary donations from Upper Ten Mile Church, the volunteers of the congregation are also being filled as they go about making this annual outreach happen.

“We have 61 volunteers each week for the fish fry,” Eric said, adding that the average weekly attendance for Sunday worship at Upper Ten Mile Church is around 65. “Basically, everybody gets involved in one way or another. We do have a handful of volunteers from other churches that are a big help.

“This is very important to the church itself. It keeps everybody going. We have a tremendous group of Baby Boomers who are very active right now and they’re really the hallmark of our fish fry crew.” 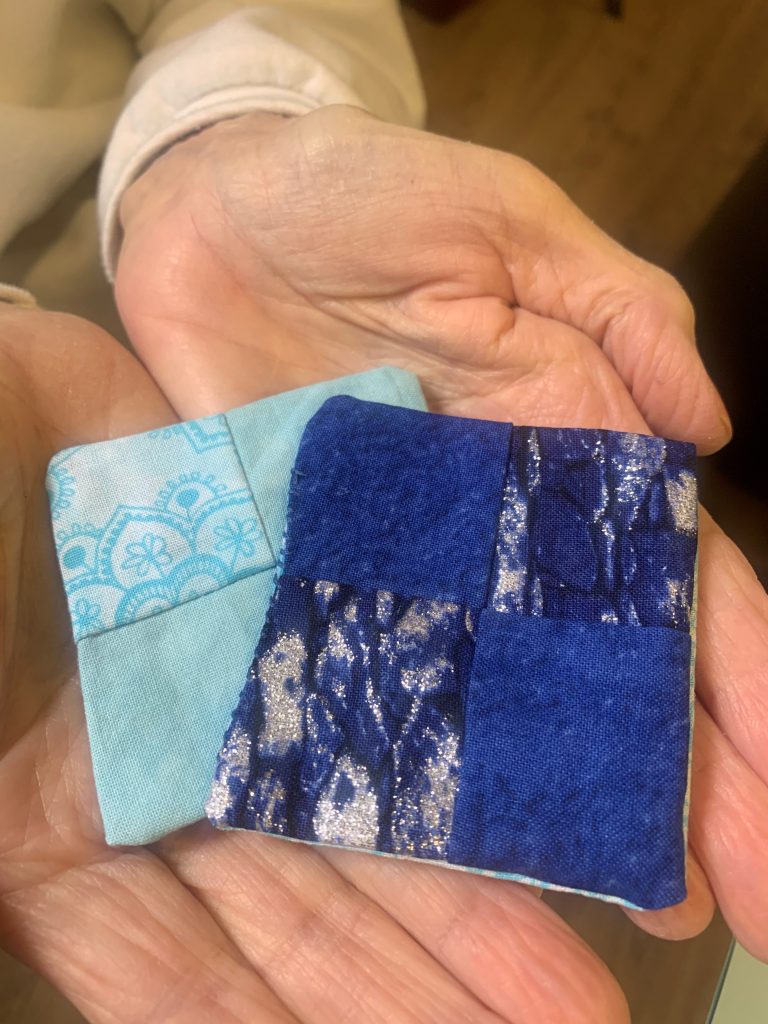 Pocket crosses are handed out to customers at the Upper Ten Mile Church fish fry who are in need of support.

The fourth week seems to be the high point for sales each year, which Eric relates to the start of Daylight Saving Time and nicer weather. In 2019, Upper Ten Mile Church had its high-water mark of 1,400 meals sold on that day. If too many meals are prepared, the extra are taken into the City Mission for its evening meal.

In years past, the church’s fellowship hall was open for people to come in and eat their meals, but that ended midway through last year due to the coronavirus. This year, it was a curbside-only pickup, which did slightly hurt total sales.

“We miss having the people inside the building,” Eric said. “There were people who came early and stayed late. You’d be surprised how many people eat there twice a day.”

When there was inside seating, one of the church’s volunteers, Audra Young, who creates “pillow crosses” (a two-patch square that has a small, wooden cross inside), handed them out to people who were struggling or remembering a loved one who had passed in the previous year.

“It lets them know that somebody is always thinking about them,” Eric said of the pillow crosses. “We want people to have a very good experience.”

It simply adds to the outreach provided by this longstanding mission at Upper Ten Mile Church that has sold more than 120,000 fish sandwiches in the last 16 years.

“There’s a lot more to all of this than good fish,” Eric concluded. “We do have good fish, but what people come back for is much more. We’re trying to lead by example for the community. It’s an unbelievable way of bringing everybody together for one common good.”