Joy Kaufmann ‘grateful’ for her time in Huntingdon Presbytery 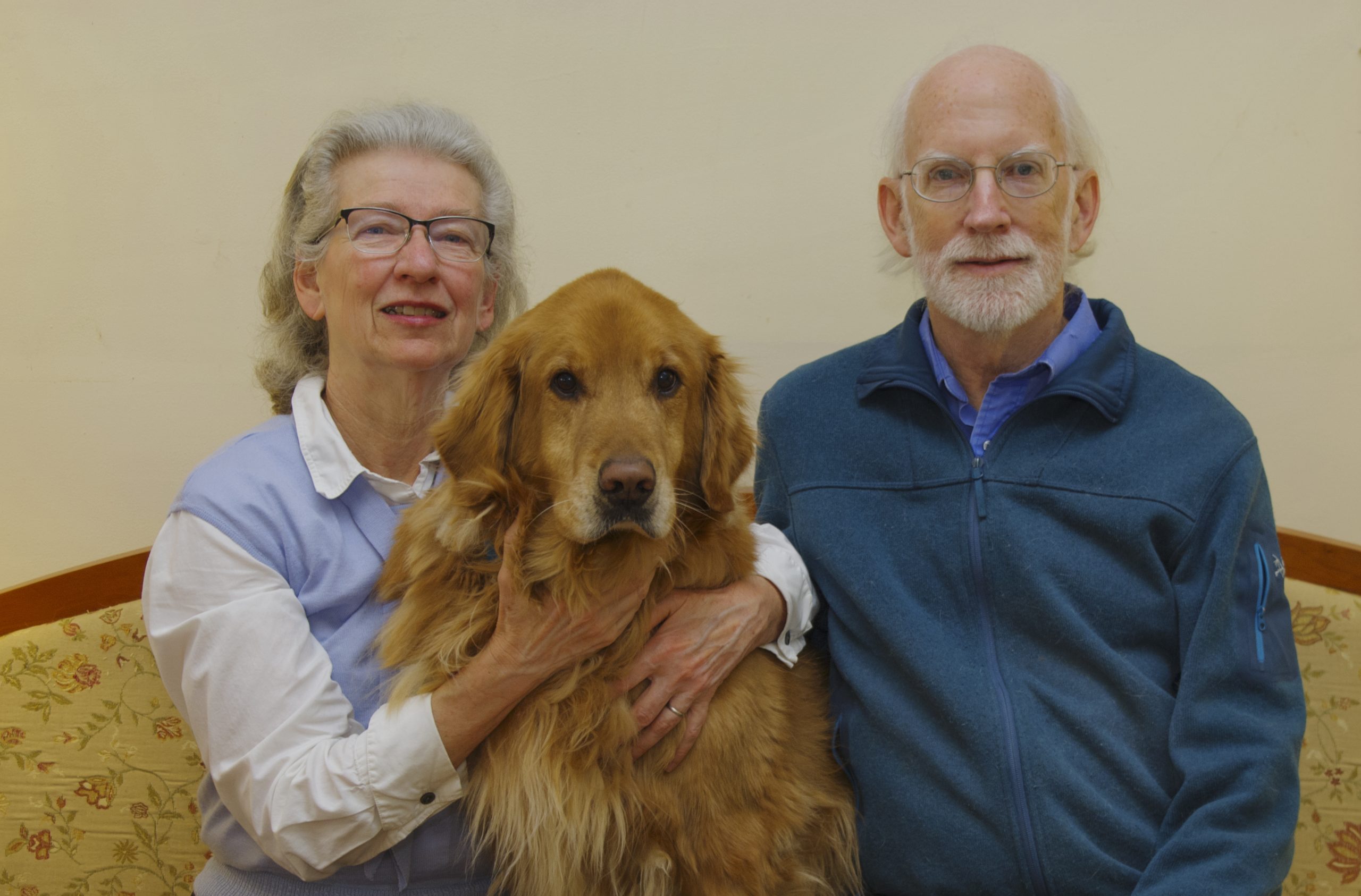 Joy Kaufmann is looking forward to spending more time with her husband, Bill, and other faithful companion Critter after retiring following nearly 18 years as the general presbyter at Huntingdon Presbytery.

As is the case with many called leaders of the church, the positions they think they want and aspire for are not necessarily what is in God’s plans. For the Rev. Joy Kaufmann, the former general presbyter at Huntingdon Presbytery, that was certainly the case.

“When I first heard of the position (in 2002), I was looking for a congregation to serve,” Joy recalled. “I assumed I would stay for maybe five years, but as things unfolded, it just seemed like a better and better opportunity for ministry.”

Joy ended up serving Huntingdon Presbytery for nearly 18 years before retiring at the end of 2020, a call that coincided with many changes occurring in the central Pennsylvania region. The most notable is the shrinking size of congregations, an issue that is not uncommon in many parts of the denomination. The other deals with the historic flood of 1972 that had a devastating effect on several towns in the presbytery.

“Congregations and communities all around the presbytery were just wiped out,” Joy explained. “If you were near a stream or a river, you were flooded. The flood waters stayed, and it had a devastating effect. What has happened since then is the number of persons in almost all of our communities have shrunk to the size that they were in 1910, which is approximately 40 percent smaller than they were in 1955.

“When I moved here, there was a fair amount of collective depression in our communities. That has really changed. We have turned around so much for the better. People are beginning to say we have a terrific quality of life around here.”

With businesses back on their feet, communities in Huntingdon Presbytery like Lewistown and Altoona are thriving again. This results in many of the younger population, who not too long ago were leaving the area to find a better way of life, now staying near their homes because there are new opportunities for them to succeed.

All told, Joy has spent 35 years working with congregations. A native of Severna Park, MD, she spent five years as the director of public advocacy for the Pennsylvania Council of Churches in Harrisburg prior to coming to Huntingdon. This came after her first call, which landed Joy at Market Square Presbyterian Church – also in the state’s capital city – where she spent 12 years as the associate pastor.

“The thing I’m most proud of is helping the congregations find pastors who are good quality pastors and good fits for the particular congregations,” she said.

While Joy found this part of her general presbyter call very rewarding, she pinpointed a program aided by the Synod of the Trinity that she will always look back on as a high point of her time in Huntingdon.

“The Synod very kindly made an offer to help the presbyteries encourage churches to take part in the Partnership for Missional Church,” she said, recalling that the Synod helped foot the bill to enable its presbyteries’ congregations to take part. “That was a three-year set of processes. We had 20-some of our 40-some congregations take a look at the opportunity, and five of them signed up for the Partnership for Missional Church.”

Because 10 churches were needed to form a cluster in the partnership, one of the Mennonite conferences in the area contacted the Synod about teaming up with local Presbyterian churches to meet that requirement. It turned out to be a rewarding time for all involved.

“That really gave a spark of new life and creativity to the missional church processes that otherwise I don’t think we would have had,” Joy said. “It would have been good, but this was fabulous. We got to hear from a whole different set of lenses. Both sides said how enriching it was to hear from the other. So, even while our churches were trying to learn how to look out beyond our own walls, they also were looking out beyond our traditions, and that was wonderful.”

Charged with continuing Joy’s legacy in Huntingdon is Kate Sillman, the new interim general presbyter. Under Kate’s leadership, Joy is confident the presbytery will continue to push congregations to get out into their communities and do God’s work as well as continuing ecumenical partnerships in the region.

As for what’s next for Joy, she and her husband, Bill, who is recovering from some recent health challenges, hope to get back to enjoying the outdoors, and that includes traveling to places like Nepal, Japan and China and doing some other high-altitude trekking. Joy is also hoping to pick up some new hobbies, like “relearning” how to knit and weaving on her loom. With her passion for the outdoors, working on climate change is also something Joy would like to tackle in retirement.

“What excites me about it is, for my great nieces and great nephews, this is going to be the greatest ontological challenge of their generation,” she said, “and I feel like my generation is responsible. I owe it to them to try and improve things.”

Making improvements has been the cornerstone of Joy’s ministry in Huntingdon and elsewhere during her time with the church. Clearly, that’s not going to change going forward. And that mindset is what made her time in the presbytery so special and something she will always look back on fondly.

“Everything we do in the church ought to be about helping people connect with God,” she concluded. “I think that the practical administrative ministry that I’ve carried out for the last nearly 18 years has been about removing obstacles and connecting with God. A lot of the work had to do with helping churches when they got themselves in a bit of conflict or they were seeking a pastor. I felt really pleased that God has allowed me to help congregations to do that.

“I have been so grateful to God to be able to serve with these good people. I did not grow up in an Appalachian culture. I grew up close to Annapolis, Baltimore and Washington D.C. I have loved getting to know the culture and the persons who populate it here, because they are hard-working, they are honest, and they are essentially kind. It’s been a lovely experience to serve God with them.”