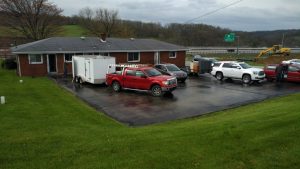 Volunteers turned out to help the Washington Presbytery staff move from their location on Lively Road in Eighty Four just down the road to Emmanuel United Presbyterian Church.

Many churches are wrestling with what to do with the empty spaces in their building. As membership numbers decrease, there seems to be less of a need for buildings that were constructed in the mid-1900s to house as many people as they once had to.

This same situation also applies to mid councils as they have seen their number of staff shrink over the years to the point where an entire building is not needed to carry on their work. A structure where multiple offices, a resource center and conference rooms were available is no longer as much of a necessity as it once was. And if a mid council can find a church building that has some of those space options available, then both entities can benefit.

This is precisely the situation Washington Presbytery has been in in recent years as their work only requires two people in the office, the resource center has been removed and less and less in-person meetings are necessary. It started an evaluation process for the presbytery’s leadership that resulted in the sale of the Washington Presbytery Center building on Lively Road in the town of Eighty Four, PA, this spring and a move less than a quarter of a mile away to Emmanuel United Presbyterian Church.

“At different times in recent years folks had raised the question whether or not a dedicated Presbytery Center building was needed,” said the Rev. Craig Kephart, executive presbyter of Washington Presbytery. “It’s been talked about here and there for eight or 10 years but much more realistically people wondered about that question since about 2017 or 2018.”

“Meetings started being in other places,” added Nancy Youmans, the presbytery’s administrative assistant. “We had downsized basically to Craig and I, and he attended to presbytery business away from the office, so quite often I was there by myself. The central office place wasn’t a central office anymore.”

Another factor in the move is that the presbytery building had been located on farmland, which has since been sold and developed into business lots. This change to the scenery made the presbytery’s lot more desirable for developers in recent years and helped nudge the leadership into selling. The building was listed around Jan. 1, and in a short time a buyer had been found.

By late April, a crew of volunteers were moving Craig and Nancy into their “new” office spaces at Emmanuel Church. Furniture and other items that weren’t moved were made available to churches or donated to local agencies like Habitat for Humanity’s ReStore. Nancy and Craig’s work to sort through records and determine what needs saved prior to moving day was an important step in making the move go smoothly.

“Go through all of your old records first and give important records to the Presbyterian Historical Society,” Nancy recommended. “Pare down your stuff, and that takes time.”

“That’s a healthy exercise for any operation,” Craig added. “Pretend that you suddenly have to move or that you’re going to be moving in three months. What would you do?”

At Emmanuel Church, Craig and Nancy were given the church’s office space, which sits above a privately-run preschool, to use while the church office operations moved into an unused choir room. Having Emmanuel’s pastorate move from full-time to part-time recently opened the doors for this opportunity. In fact, Nancy shares her talents with both the presbytery and church, answering the phones for both and helping with the weekly bulletins for the congregation.

The church building also has adult Sunday School space available that the presbytery can use as a conference room when gatherings are able to be held in-person once the coronavirus pandemic subsides.

When Washington Presbytery knew it would be moving, it announced in its weekly newsletter that it was looking for a place to move. The presbytery received several emails and phone calls from its churches, but the close proximity of Emmanuel Church made that option the best fit.

“I heard from a half-dozen congregations who were glad or willing and some who just said we’re not a good fit because we’re out on the edge of the presbytery but we’re glad that you’re doing it,” Craig recalled. “It gave the presbytery’s congregations a sense of ownership.”

The presbytery had occupied the building since 1960, but things have greatly changed since then. In the 1990s, the Presbytery Center was not only home to its staff but also a regional office for the area’s Presbyterian Foundation representative. The resource center was also large at that time with its own dedicated staff person, but by 2015 that person was no longer employed, and the center was closed.

“Bi-monthly, the Presbyterian Women’s Coordinating Committee met, and monthly the Board of Trustees and Committee on Ministry met,” Craig said. “We didn’t have much regular traffic at all. The guy that mowed the lawn was there more often than most.”

Not only is the relocation a downsizing move but also a cost-cutting one. Craig estimated that by moving to Emmanuel Church the presbytery will save more than $7,000 a year in operating expenses.

“It will help stabilize the presbytery’s financial base,” Craig said.

The town of Eighty Four (the home of 84 Lumber’s company headquarters) is a central location for the presbytery, which includes both Washington and Greene Counties. As the late Rev. Dr. Nat Roe told it, lines were drawn on a map in the 1950s to find the middle point of the presbytery, and those lines intersected near Eighty Four. The town’s location near Interstate-70 makes it convenient for those making the trip to the presbytery offices.

Despite moving during a pandemic, which in some ways has helped the transition go smoother than expected because of a lack of interruptions and other distractions that would normally occur, the change in location has not only been a needed one but also a seamless one.

“It’s probably not for every presbytery,” Craig said. “There are probably those presbyteries where there’s a mentality that the building is the presbytery. We were surprised how thorough-going across Washington Presbytery the support was.”