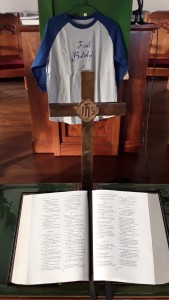 Members of the Kiskiminetas Presbytery “First Call Pastors” group have created T-shirts for themselves that remind them that it is OK to not get it right the first time.

It’s been said that a picture’s worth a thousand words. Along those same lines, numbers can certainly paint a portrait as well. Case in point: In Kiskiminetas Presbytery, there are 78 congregations but only 20 ordained installed pastors. While the gap in the numbers results in obvious issues regarding pulpit coverage and other regular pastoral obligations, it also means that there aren’t enough experienced pastors to serve as mentors for the young, new pastors who are coming in to fill some of those vacancies.

That’s where the presbytery’s “First Call Pastors” group comes in. While certainly not a new concept in Kiskiminetas – or anywhere else for that matter – this team certainly has an important role to play in the region considering the number of openings in the presbytery.

“It’s a place where we can go to have openly-asked questions, get answers, discuss questions we might have within our ministries, within our different congregations, that others can offer possibilities,” said the Rev. Marty Neal, who is one of the members of the First Call Pastors group and also the moderator of it. “We support each other through different things.

“We’re people who strive to live into the image of Christ but we’re not perfect people, so things happen within congregations. So, how do we deal with different situations? Where are other places you can go to get help with certain situations? Just to be there to help people, to help one another as young pastors who are running into new experiences and new situations that we’ve never encountered before.”

The First Call Pastors group normally meets once every two months over lunch, with an annual retreat also part of the schedule. Either General Presbyter the Rev. Dr. Don Wilson or Stated Clerk the Rev. Kathy Nice usually participate in the discussions, but the choice of topics is generally chosen by the members.

“We’re a pretty diverse group,” continued Marty, speaking of the eight or nine who normally attend the gatherings. “We have two who are still in the ordination process. There are two or three different generations represented in this.”

Even though the group is called “First Call Pastors,” it’s not only for people who are in their first call. Some who are part of the group have been pastoring for 4-5 years, and others are in their second call but are new to Kiskiminetas Presbytery.

In a show of solidarity, the First Call Pastors group has created T-shirts that read “Fail Boldly.”

“Sometimes, if there’s things we’re trying to do within a group of people and the people don’t seem to respond, maybe it’s not them, it’s us,” he said, recalling a conversation that was had during last year’s weekend retreat.

During the conversation, which stressed not being afraid to try new things, came the idea of creating shirts that reminded both the wearer and anyone who sees it that it’s OK to fail.

“It’s about being willing to try things, and if you’re worried about how people will respond to it, you’ll never know until you try,” Marty added. “And if you do try it and it doesn’t work, it’s OK. Things don’t go wrong; things happen. It’s how you react to it that people perceive it.

“It is not just about trying new things, but also about being willing to change. And if we fail, it’s about learning from failure, changing and growing, and enduring through persistence.”

These are the lessons and experiences that are being shared regularly among new pastors in Kiskiminetas Presbytery, and everyone – younger and older, new and experienced – is benefiting from it.

“We come from different backgrounds, but we can still come together,” Marty said. “We can be different but still be united in helping each other and supporting each other in working in ministry and trying to grow as ministers within our different ministries by sharing our experiences.”