Rhonda Kruse has Lehigh Presbytery’s vision in her sights 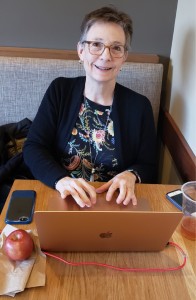 Even if the Rev. Rhonda Kruse had never worked or lived in Pennsylvania, a computer – or some higher calling, if you will – has helped her make the eastern part of the state her home for a few years. Since Sept. 1, 2019, Rhonda has been the “transitional leader” at Lehigh Presbytery, a title that is somewhat different from that of other “presbyters” and “executives” who lead their regions.

“They didn’t want it to be the traditional exec role because they did want a visioning piece to be the primary work, but you can’t get away from the exec work,” Rhonda said. “It’s still part of the position, but I’m trying to find a balance.”

After an initial few months of meeting people, visiting churches and listening to their thoughts on the direction the presbytery is going and where they would like to see it go, Rhonda entered the new year focused on the future work in Lehigh.

“They have elected a Vision Board to really be the people who are dreaming, visioning and looking at options, working with me to see what might be next,” added Rhonda, who has a renewable, three-year contract at Lehigh. “One of the key words we are using is ‘experiment.’ We switched up the way the presbytery operates. There was previously a Lead Team, and now the Vision Team is what’s driving the work of the presbytery.”

Being able to juggle the work of the Vision Team with that of the other duties an executive holds has become a point of emphasis for Rhonda.

“A challenge is finding a balance in my own time and energy between the visioning piece – looking forward and being at the 30,000 feet level – and doing the day-to-day work of an executive,” she admitted. “There’s COM work, the on-going struggles that some of the churches have. It’s being present with the churches and doing the work of an exec while at the same time trying to balance my focus on the vision piece. I’m trying not to get into the weeds too much.

“The presbytery is small. We don’t have the depth of potential leaders because we have relatively few installed pastors. A lot of our churches don’t have pastors or they’re part-time and filling in. We’re trying to find people to really dig in and help with this work at this point.”

Partnering with a couple presbyteries that neighbor Lehigh is among the visioning pieces that Rhonda is becoming immersed in as the calendar turns to 2020.

“I don’t know what that looks like,” she said, “but I think that we will need to work with others somehow. God has this figured out, we just have to discern.

“We need partners. We need to work together with other churches, congregations, judicatories to do some of the work of this presbytery.”

Prior to coming to Lehigh, Rhonda had served congregations in New Jersey, New York and Indiana. More recently she was a mission engagement advisor for the Presbyterian Mission Agency, working in the Midwest with three synods and 29 presbyteries.

“I was a deployed staff; I worked out of the Louisville office, but I lived in Maryland,” she explained. “I would meet with pastors and mission committees to strengthen relationships between the national church and the mid council or local church, thanking them for their support and making sure they knew where that support was going and how it was being used on their behalf. I let them know that there were resources available through the national church that might be helpful in enhancing the ministry that they are doing on the ground. We really emphasized wanting to partner with presbyteries and congregations.”

Rhonda admitted that she was not looking for a new call but was open to one if something came down the pike. With her Personal Information Form (PIF) on file in the Presbyterian Church (U.S.A.) database, when Lehigh went searching for its transitional leader, Rhonda’s profile was brought to the search committee’s attention.

“I really believe it’s where I belong,” she said. “I have missed being in mid council work. I really think it’s important work, it’s hard work, but it’s something that I have gifts for and I’m glad to be here.

“I feel strongly called to be here. I have felt God’s guidance every step of the way. The spirit is definitely moving in this presbytery and God has a plan for its future. It may not look the way it has in the past, but we will figure that out together.”