Members of the PA Army National Guard surround a package sent to them from “Goodies for Our Troops,” a mission that is housed in the First Presbyterian Church of Wellsboro, PA.

Exactly one year after the pandemic forced many public places to close, an important outreach in Wellsboro, PA, was looking for a new place to call its home as doors began to open again. Hearing about a need that it could fill in the community, the First Presbyterian Church of Wellsboro offered its lower meeting room to a program that supports military members from the United States and beyond.

“Goodies for Our Troops” is a 501c3 non-profit organization that sends care packages around the world, to not only American soldiers but also their allies. It’s a labor of love for Dawn Pletcher, the founder of “Goodies” who at nearly 80 years of age has been running the day-to-day operations of this outreach since its inception in 2005.

“We’re in the process of putting smiles on heroes’ faces,” Dawn said.

Goodies moved into First Wellsboro in the spring of 2021 when the church made room for the outreach. Two recovery groups had been meeting in the church’s lower meeting room, and they transitioned to a third-floor Sunday School room, enabling Goodies to have a place to call its own.

“We thought we were going to have to disband because there just wasn’t anything available to meet our needs,” said Dawn, who does not attend First Wellsboro. “The good Samaritans of the First Presbyterian Church found out about it, and they voted on it.”

Mike felt the extra weekly work was well worth it so that the church could open its doors to meet this organization’s needs.

“The mission statement of our congregation is to embody, demonstrate and proclaim the Word of God through our heads, hearts and hands in the communities of Tioga County (PA) and beyond,” he said. “We were demonstrating the Word of God to Goodies when we gave them a space at a time when they really needed one.

“One of our elders, Craig Devenport, saw a great ministry in our community all the sudden in need of a space. Our session was grateful to be able to provide it. Christ came down to us to grant us a space in so great a place that we can only begin to imagine it (John 14:1-3). We were thrilled for the opportunity to do something that, albeit in a smaller way, followed his example.” 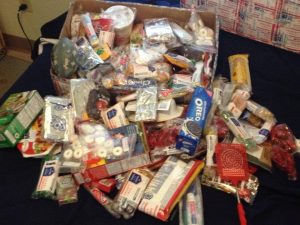 The contents in a “Goodies” box varies from food to personal hygiene items.

Goodies is not affiliated with First Wellsboro, but the church does list Goodies as a mission partner on its website and will promote some of its events. Dawn has spoken to the congregation about Goodies during a Minute for Mission talk, and some members of the church are volunteers for Goodies. The church’s youth group has supported Goodies through packing events in the past, and a jar is placed in the church’s Fellowship Hall for donations from time to time, creating a connection between the two groups.

Dawn has been reaching out to the troops since owning a store in Maryland where many of her customers had military backgrounds. With a family lineage that dates to World War II, Dawn remembers the emotions of customers who came in the store in the hours and days after 9/11. It prompted her to want to send packages from “home” to those who were being called into immediate service.

“I first was involved in care packages in World War II when I was just a little kid,” Dawn recalled. “My grandmother would take me to the church in Galeton, PA, and I know now what they were doing. The ladies were making the gauze bandages for the troops. And my mother always was making care packages for her older brother who was a bomber pilot in the Pacific. Every war has had somebody close that I’ve sent care packages to.”

Dawn moved to Wellsboro in 2004, and the following year the local National Guard was deployed to Iraq, kickstarting a desire for Dawn to again reach out to the local military with care packages. The Goodies program began in Dawn and her neighbors’ apartments, and from there it was housed in a nearby community center, a Methodist Church and a basement of a downtown building. An article in the local paper announced that Goodies had to move again, which is when the First Church of Wellsboro got involved.

“When I had my store, I didn’t know what it cost and what work was involved because I had employees that did that,” Dawn said with a laugh. “The good Lord takes care of everything because had I known, I would not have done it. Here we are, 17 years later … I really did not think it was going to be a long time.”

Dawn compiles a list of names and addresses from family, friends, neighbors and even troops themselves who have heard about the outreach. Some troops will also submit the names of other military who are not getting the packages so that they can be included.

“We’ve even sent to British, New Zealanders, Spanish, Italian and a couple other countries,” Dawn said. “The first one that did that I thought I don’t know about this. But you know what? They’re all on our side, we’ll do that, and they’ll know how generous Americans are.”

An average of 50-60 boxes are mailed every month thanks to a group of loyal senior citizen volunteers who package three days a week for a couple hours at a time. Among the items in the boxes, which weigh between 25-45 pounds, are trail mix, nuts, power bars, beef jerky, flavor water packets, instant oatmeal, M&M’s, peanut butter cracker and hygiene items. The contents vary based on the time of year because some items, like candy bars, are damaged by the heat and thus are only sent during the winter months. 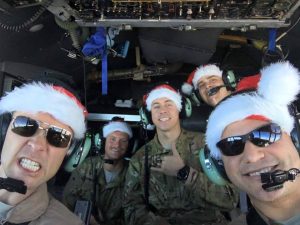 An air crew wears the Santa hats they received as part of their Christmas package from Goodies.

In the beginning of October, Christmas items like a Santa hat, stocking and decorations are included in the boxes. Some packages are also sent to chaplains and include Our Daily Bread and Upper Room reading materials and Bibles when available. The First Wellsboro Church and other congregations in the area will donate leftover pamphlets to be included in the chaplain boxes as well.

Dawn has received correspondence back from some of the troops who received the boxes, letting her know how meaningful the packages are. One that stands out was from an Army National Guard chaplain who wrote:

“Every care package that a Soldier gets to open, or gets to pick things out of, brings joy to their faces. This is something that is witnessed time and time again in the distribution of these types of packages. Please take comfort in knowing your care packages have improved the lives of Soldiers in multiple areas overseas and continues to spread joy down to the last item inside.”

Everything is donated, and grants help pay for some of the items and the shipping costs. Churches, schools and service clubs in the area regularly do drives to help accumulate the items as well. And the local Wal-Mart provides gift cards that allow the Goodies team to purchase whatever they need.

“We’re happy for anything we get,” Dawn said. “No donation is too small.”

It’s a well-organized process that continues to benefit everyone from the sender to the recipient.

“The good Lord has provided,” Dawn concluded, “and as long as he provides, we will make it happen.”

Volunteers package items that will be sent to American troops and their allies around the world.