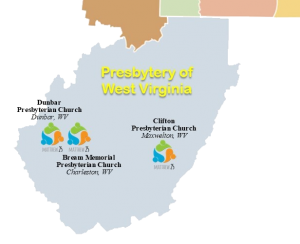 Many congregations have established ministries surrounding congregational vitality, dismantling structural racism and eradicating systemic poverty. The Presbyterian Church (U.S.A.)’s Matthew 25 invitation in 2019 was created in part to celebrate those initiatives while also hoping other congregations will join in these efforts. But with the coronavirus pandemic that followed a year later, many churches had to halt their missions due to the protocols that limited gathering, also curbing momentum for their programs in a time when they were needed most.

The First Presbyterian Church of Dunbar, WV, is one of those congregations that felt the brunt of the pandemic. Already having ministries in place related to the three foci of the Matthew 25 invitation, First Dunbar became the first church in the Presbytery of West Virginia to answer the denomination’s call in 2019.

“We all thought it was such a great idea and fit with so much of what we were already doing at the church that we adopted it right then and there,” said Terri McDougal, an elder at First Dunbar, recalling a conversation at a session meeting in May of 2019 about the Matthew 25 invitation. “It seemed like God was speaking to us: ‘This is what I need you to do.’”

A year later, members of the First Dunbar Matthew 25 committee were asked to lead a workshop on the program at their presbytery’s annual Festival of Faith. There, other congregations were challenged by the conversation and reached out to First Dunbar for additional details. It has resulted in a new friendship that no one saw coming.

“It was after we presented that session that we heard from our colleagues at the Bream (Memorial Presbyterian) and Clifton (Presbyterian) churches,” McDougal continued. “The global covid pandemic has been such a hardship for some of the people. We look at our three-church collaboration from Matthew 25 as a silver lining in the pandemic.”

“We had started considering about whether or not to become a Matthew 25 congregation,” recalled Dawn Adamy, the pastor at Bream Memorial. “We thought it would be a great thing to learn from them (First Dunbar) and their experience. After that it kind of sealed the deal for us.”

Both Bream Memorial and First Dunbar are located in the Charleston area five miles apart, but Clifton is more than 100 miles away from the other two in Maxwelton, WV, making the relationship even more special.

“It almost seems heaven-sent the ideas that pop up in the meetings,” McDougal said. “Outside of the Matthew 25 activities, we’ve become friends, even though most of us have never met in person. We have shared, as friendships do, family sorrows, family joys. The last couple of meetings we have seen photos of new grandbabies.”

“We were the only ones (in the presbytery) to become Matthew 25 churches,” Adamy added, “so we really felt like we needed to support each other, spread the word and hopefully get more churches to want to join on the Matthew 25 journey. We talked about the things we could all three do together to be faithful to our Matthew 25 commitments but do so in a way where we could support each other. Through that we have really built this great community of these three churches.”

Clifton Church, which calls itself the “country cousins” in the group, has extended an invitation to the group to join it in the future for a potluck gathering in a park on its church property, giving everyone a chance to gather face-to-face after meeting only by computer.

“At first it was a meeting but now it’s like a gathering of friends,” said Suzy Meadows, an elder at Clifton Church who is the chair of the Matthew 25 committee there. “We weren’t able to be out in public with people, so it was the perfect solution. This bond probably would not have formed had it not been for the pandemic. It was like a silver lining.”

Another church from the Charleston area has inquired about joining the trio in their Matthew 25 discussions, and these numbers could continue to grow as word circulates about the success of this group.

The current triad of churches meets at least monthly on video conferencing program Zoom to discuss ideas and share stories about their own individual Matthew 25 ministries. At Clifton Church, it is instrumental in food distribution in its area, helping with a food bank and also being part of a rotating meal preparation program where it prepares 60 meals that are delivered to shut-ins on a regular basis. It also collects money during the Christmas season to be given to three local elementary schools and the funds are used to help students in need.

“We could see that we were doing Matthew 25-type projects,” Meadows said. “It seemed fitting that we would become a Matthew 25 church. We were already a giving-type of congregation and it fit our needs.

One success story from First Dunbar is its clothing ministry that this winter saw nearly 300 coats on outside racks being taken by the community, including one by a local school bus driver who stopped during his route and gave it to a young girl on the bus who was in need.

“That is one of the things about Matthew 25 is that it is seemingly everyday acts that mean so much to people,” McDougal said. “We’d encourage people to take the initiative and become a Matthew 25 congregation. Those little bits of good add up to a big change for the world.”

At Bream Memorial, it has been addressing poverty issues in its neighborhood through a food pantry and clothing closet. Following the murder of George Floyd by a Minneapolis police officer, some church members participated in local rallies and others did a book study on “Waking Up White.” The Matthew 25 invitation and its three foci have given Bream Memorial, which also did a family movie night with a neighboring predominantly Black congregation, a renewed calling in those areas.

“Because we are in the most racially diverse part of the city, we just felt it was incumbent upon us – if we were really going to fulfill our mission – to focus on all three areas,” Adamy explained, “and that’s what we have done.”

This relationship has been instrumental in giving renewed enthusiasm to these three West Virginia congregations who are emersed in the Matthew 25 invitation.

“We are more inspired and more emboldened to do the things that God is calling us to do related to Matthew 25 and beyond when we do it together,” Adamy said. “Our witness is stronger. These relationships build up the body of Christ in ways that make our witness stronger, both as individual congregations and together. We draw a lot of energy from each other.

“We’ve grown another branch of what it means to be a church. We are three different congregations but together we are able to express God’s love in a very innovative and different kind of way than any of us could as individual congregations. We’re all in our own context able to address some of the bigger questions but in a way that is very specific to where we are located. We are inspired by each other’s work and the innovative things that we are able to learn from each other.”

McDougal agrees that this collaboration has been a blessing no one could have seen coming.

“With the pandemic and our church not meeting in person, there were so many activities put on hold,” she said. “We knew that we were still doing things, but it didn’t seem like we were making as big of an impact. Then we started collaborating with the Bream and Clifton churches, organizing activities like prayer vigils and storytelling. It gave our congregation new energy. It showed people that we can continue the mission of Matthew 25 even in the midst of a pandemic.

“When we didn’t think that there was a way for us to continue some of our activities, it’s almost as if God opened doors for us to be able to do new activities in new ways.”

Meadows hopes the trifecta of churches continues well into the future even after things return closer to pre-pandemic times.

“I hope that as things get back to normal that we continue with these other churches because it’s been helpful to us,” she said. “It’s like a track meet. You run faster and do better when you have someone with you, inspiring you. It’s been a blessing from God.”