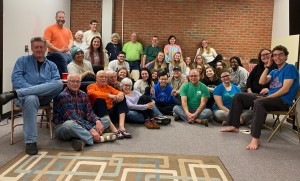 In the fall of 2017, three hurricanes (Harvey, Irma and Maria) ascended on the East Coast and Gulf Coast of the United States, impacting areas in Texas, Florida, Puerto Rico and the U.S. Virgin Islands. It was part of the costliest tropical cyclone season on record, with a damage total nearing $300 billion.

People everywhere were glued to the media coverage and became compelled to offer assistance, from donating money to collecting things like food and toiletries for those who were affected by the devastation. There were also many – from college students to the retired – who had a sudden urge to travel to those areas and do hands-on work to rebuild homes. That was definitely the feeling for part of the student body at Wilson College in Chambersburg, PA.

“There was a lot of anxiety on campus,” recalled the Rev. Derek Wadlington, the Helen Carnell Eden chaplain at Wilson. “They were concerned about ‘What can we do?’ They didn’t like my answer of ‘Well, nothing’ because in the moment you can’t do anything. We can’t collect stuff and send it down because there’s just no place to receive it. It takes time.

“We can send money, we can pray for them, but what we can also do is look to see other places that were affected by storms that still need help.”

A year earlier, Hurricane Matthew had ripped through several southeastern states with Category 5 intensity, and the rebuilding in those areas remains ongoing. Being a Presbyterian pastor and minister member of the Presbytery of Carlisle, he knew of the work being done by Lend A Hand, which is a mission project of the presbytery that is a disaster response and assistance program. Derek reached out to Lend A Hand’s Office Coordinator Jim Davis and found out that Lend A Hand was taking a trip to North Carolina to assist in the reconstruction.

Within a few months, Derek was chaperoning nine students to Tarboro, NC, to help in the rebuilding.

“Here’s an example of a storm that people didn’t pay any attention to in a community that nobody’s heard of that has hundreds of homes that are unlivable,” Derek said.

This experience kickstarted what has now become an annual winter trip to North Carolina. In 2020, the group has grown to 22 from Wilson College who traveled south alongside another 17 Lend A Hand volunteers. 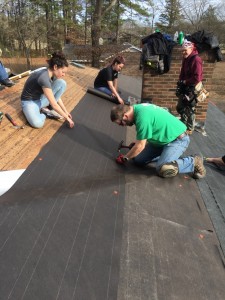 “It’s a chance for students to go and see how they can be helpful and what kind of work you can do, then go back on an annual basis to see progress and understand that this kind of repair work takes time,” Derek said. “So, there’s that educational component of ‘You are making a difference for people who have essentially been forgotten because there have been other natural disasters that people have focused on more recently.’”

As a chaplain, Derek is the religious and spiritual resource for the college and oversees service learning. As part of that role, he is responsible for 20 scholarship students who must perform a certain number of community service hours each year in order to keep their funding. Nearly half of them made the trip with Derek to North Carolina this year, with the rest of the group being filled out through other various means. In the three-year history of the trip, two students have gone all three times and a handful have participated each of the past two years.

It’s the shared stories from the students that help generate word-of-mouth momentum for the trips and keep the demand high for these experiences. The cost of the trip is free to the students thanks to funds distributed by the Synod of the Trinity to the Presbytery of Carlisle, which in turn gives the money to Wilson’s campus ministry program. The Synod’s funds not only cover the Lend A Hand trip to North Carolina, they also help support the college’s “Spring Break Experience,” which keeps students in the Chambersburg area doing service projects and this year will also include a stop in Washington D.C. working with a congregation and its ministries in the city.

“This is a wonderful example of a collaboration that brings together the resources of the Synod, the presbytery and a college community for the sake of our Presbyterian witness in places where people need to experience the love and compassion of Christ,” said Presbytery of Carlisle Interim Executive Presbyter Cheryl Galan. “Partnerships like this are both life-giving and transformative for those who participate.”

The ability to pick up a large chunk of volunteer hours in a week’s time is what draws many of the college students to the Lend A Hand trips, and then the unique experiences keep them coming back year after year. Derek remembers the first year when a few of his female students volunteered to work on a roof and were given that opportunity, much to their surprise.

“The students were learning skills that they didn’t know they could even learn,” he said, later recalling a student who told the group that on six previous church mission trips she had only been allowed to paint, and now had re-roofed a house. “They were being empowered. So what I saw was over the course of the week was some growth, but when they came back to the campus, I was seeing how changed they were and how they grew into being much more open about trying stuff, being more active in the community on campus and elsewhere, engaging in things in a different way than they had before.

“That transformation of those students is really what it’s about for me, putting them in a situation where they are going to encounter something that they hadn’t.” 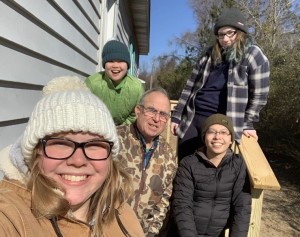 Derek added that as the college students were working side-by-side with the Lend A Hand volunteers ranging in age from 62 to 80, and learning that some had been on as many as 80 week-long work trips in their lives, it was just yet another powerful reminder of what can be accomplished.

“I asked them why they did it,” Derek said of spending the equivalent of a year and a half of their lives volunteering. “And they all said, ‘Because our faith calls us to.’ That is the most powerful witness that I can give about gospel work right there. Students are coming to help, learn and do and see people witnessing by giving of themselves, and that’s is huge.”

And, of course, there is interaction with the homeowners as well for the workers as they repair the homes. Hearing the stories and seeing the lives that are being directly affected by the work being done is simply icing on the cake for everyone involved.

“One person – in this case, times 39 – makes a difference,” Derek concluded. “Each of our little actions adds up over time and we are working in supporting one another. The spirit is moving through that and binding us together.”