A group that represented seven churches from western Pennsylvania traveled to Corpus Christi, TX, this summer to participate in disaster assistance following the devastation caused by Hurricane Harvey, which destroyed large areas of Texas one year earlier. A Synod of the Trinity Mission Travel Grant (more information here) of $2,000 helped cover the costs for this group of more than two dozen people make the trip. A blog written by the volunteers can be viewed here. Below are some highlights from the blog, which was submitted by the Rev. Dr. Peter de Vries, the pastor at Old Union Presbyterian Church in Mars, PA. 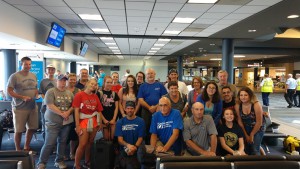 This week, seven churches formed a loving, Christian community. We learned that the church is a fellowship of the people. As one youth participant put it, “This is my church.” Two local churches hosted us: one with overnight accommodations, and the other with an air-conditioned space to escape the south Texas heat for our lunch breaks. We had random, casual interaction with disaster relief teams from other denominations (Lutheran and Southern Baptist). By wearing our blue PDA shirts, we had frequent interactions in public when people asked about us and expressed gratitude for coming to help them recover.

Those working on the east side digging a trench for septic pipes were soon suffering from the hot, sunny conditions there, and less of a breeze. By the afternoon, even the shadows behind the house shrank to almost nothing, and the breeze lessened, too, just as the temps rose through the 90s. In the afternoon some of the young girls started to paint the boards used for trim out in the hot sun. Then before I knew it, a pink portable canopy appeared that helped to shade those hard workers. They know the value of doing an outstanding job, since we are here to represent Christ Jesus, and we are doing this job not for money or glory, but simply because we love our neighbor. As Pastor Doug highlighted last night in devotions (at Parkway Presbyterian Church), when we step into someone’s house, we are supposed to consider it “Holy Ground.” So, of course, high-quality work should be a top priority, no matter how young and inexperienced you think you are.

In the mid-afternoon Bill and daughter Emma worked together to trim the wild looking trees in the backyard. I was once again reminded of our true purpose here when, after we had done the cleanup of the front yard — weedwacking and raking and brushing away the dust – a sidewalk was revealed in front of the house that contained the names in the concrete of those who lived there and were anxiously waiting for a family house that was livable again.

Today we learned the good news, that the house we are working on is the first one to be completed by the Coastal Bend Disaster Recovery Group, and the opening day, Aug. 10, is two weeks prior to the anniversary of when Hurricane Harvey first hit Texas. Now on that day the local and national media will be there to celebrate this momentous occasion, and many corporate sponsors will be looking forward to seeing how their monies have been spent. Hence Peter stated that no job is too small or demeaning, since everybody must do their part to make the house-opening a success, in order that we continue to have a revenue stream from donations so that other groups will be able to continue building long after we leave.  No pressure there! After all, the good Lord is on our side.

In the evening, (Pastor) Doug led the devotions, about the Bible’s New Testament parable of the “Talents.” One thing I took away from it was we all have God-given talents, and we should not be afraid to let them shine, even though somebody else may be able to do it better. 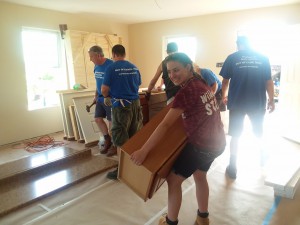 More yard clean up, looking real civilized now. The young ladies were under the pink pop-up canopy, and after a while they must have felt really sorry for me because I got a paint brush, too. And more geckos in the storage garage. Must be a Texas thing.

Today we just a half-day (nobody even complained about that!). After the work was done the fun began. For instance, some wanted to go to a water amusement park. Or a sightseeing trip aboard the decommissioned aircraft carrier Lexington, permanently docked at the Corpus Christi harbor, now a big tourist attraction. Others still went to the Texas State Aquarium, saw exotic birds and fish and were delighted by the live dolphin show. Elvis and Doug decided to hit the beach, literally. And some poor soul sweated out a stay at the world-famous Hans A. Suter Wildlife Preserve. And tonight was our night to eat out. Because there are so many of us, we split between two different places: seafood or BBQ.

We broke up into two teams today since we had two separate houses to work, the first one in Refugio and the second in Rockport, which is right along the coast where Harvey came ashore last year. Bill and daughter Emma started to caulk the cracks and nail holes in the heavy wooden plank siding, while some of us including me did some much-needed yard cleanup of wood and building material scraps that were all over the place. Then we started to apply the bright blue paint to one side, then the next. Even though the house is only one story, scaffolding was still needed to reach the highest spots near the roof. Painting the siding on the south side was harder due to the bright and hot sunshine there. 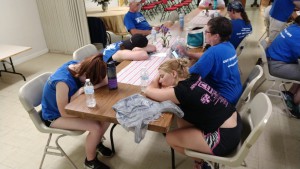 Before we all left we blessed the house and signed our names on the support board below where the front steps will be. Yes, may the good Lord bless those people. Actually, we know that they include Captain Benny, a well-known and liked restaurant owner who also lost his business in the disaster.

Friday is the end of most work weeks, and so it was for us. We all had a hand in making the week better for us all, so let me say for everyone how much we needed the efforts of each individual, living together as one loving Christian community. Especially the work that we came here to do: fixing up broken homes (and hence broken lives) in weather conditions that we definitely were not used to and which could make anyone extra cranky. Overall, I am very impressed and pleased at how nice we all were.

In tonight’s devotions led by Pastor Doug we talked about our time together. Tori said, “We are all broken and scarred. … Seven churches came together as one loving Christian community. … We all have a right for a habitable home,” which was one possible definition of the term “promotion of social righteousness” that is from the Synod’s suggested reflections for our mission trip.