A last hurrah in St. Louis 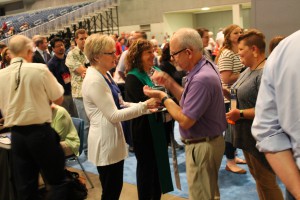 On the sixth day – at exactly 5:30 p.m. – I rested. It was only for about an hour, but to watch a little television while eating some leftover deep-dish pizza from Pi Pizzeria (yes, named after the math equation) and drinking an RC (who knew they still made Royal Crown cola?) was a nice change from the hectic pace I chose to keep at this year’s General Assembly. My days begin with posting the previous day’s news to the Synod website and social media platforms, then hustling off for commissioner and now plenary meetings before either taking in a ballgame or touring the Gateway Arch. I return to my room late, spend close to two hours writing my recap for the day, downloading photos and posting other people’s blogs to the Synod website before collapsing in bed at or after midnight. Then I wake up and do it all again.

It’s been a rewarding experience, and as I prepare to leave St. Louis for central Pennsylvania on Thursday morning, I will look back fondly on my first GA. I’m disappointed that the next Assembly in 2020 will be in Baltimore because that’s a city I’ve been to many times to watch my beloved Orioles play. I look forward to exploring new cities down the road (Columbus, Ohio in 2022 and Salt Lake City in 2024) as I’m sure this won’t be my last GA.

My self-prepared agenda for the week had me being “immersed in plenary” on Wednesday as committees began sharing the overtures and resolutions they have been discussing for the last 2-3 days. This part of GA, which is where overtures are either approved into being or rejected, began with an Ecumenical Service of Worship and Holy Communion. One of the more powerful moments of the worship service came when the Lord’s Prayer was recited simultaneously in the many languages of the ethnicities represented around the room. 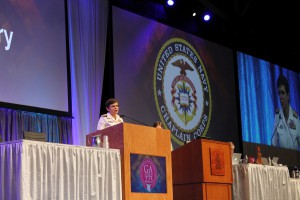 Also part of the day’s special moments was an appearance by Margaret Grun Kibben, the Chief of Chaplains for the United States Navy Chaplain Corps who is a pastor for the Presbytery of Philadelphia and grew up worshipping at Neshaminy-Warwick Presbyterian Church in Warminster, PA. Margaret spoke about war and her place as a Christian in it. She said, “Chaplains are not combatants, so it’s not an issue of whether we believe in war. We believe in people. We are there to be ‘you’ for ‘them.’”

The first overture to be discussed in plenary from the Synod of the Trinity was Carlisle’s “On America’s Interfaith Context and the Church’s Challenge,” which was approved as amended easily by voice vote. One item that did receive plenty of debate and consideration was that of “Adopting the ‘Letter from Birmingham City Jail,’ written by the Rev. Dr. MLK Jr., as a contemporary statement of faith (but not with constitutional standing).” This overture was approved, thus beginning the process outlined to include it in the Book of Confessions. 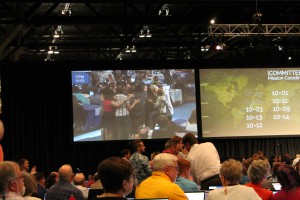 An emotional moment occurred during the evening plenary session during a discussion to include intersex and asexual (making it LGBTQIA+) on an overture asking that an advocacy committee be created in the PCUSA for LGBTQ+. A Young Adult Advisory Delegate, speaking in favor of adding the two additional letters, said, “Dad, I’m not sure if you’re watching, but I’m bi and this is the first time I have said it in public.” As he headed back to his seat in tears, he quickly found himself in the middle of a group YAAD hug as applause rained down on him.

Elsewhere, Hill Jordan from Pittsburgh Presbytery provided an update on the Freedom Rising initiative that was approved at the 222nd GA in Portland, OR, in 2016. The report reads, “For the past two years, each of the five presbyteries in which the five pilot cities are located (Baltimore, Charlotte, Western Reserve, New York City and Pittsburgh) have undertaken regular conference calls to speak about initiatives each mid-council has chosen to pursue within and beyond their bounds, including a national launch in Pittsburgh, opening donor accounts with the Presbyterian Foundation, and promotion through the Peacemaking and Global Witness Offering.” Also Wednesday night, the Rev. Dr. Diane Givens Moffett was named president/executive director of the Presbyterian Mission Agency.

Today I also took my last tour of the Exhibit Hall. I have probably stepped inside this area at least once each day, if for nothing else just for a change of pace in my day. While the bulk of the room consists of Presbyterian colleges and various PCUSA-related organizations handing out literature and free pens, one section consists of the “Free Trade Area” where different hand-made goods from around the world can be purchased. Available are everything from cashmere scarves made in Jerusalem to ornate metal angels made in Central America out of recycled oil drums. Despite the unique items available, conversations with merchants early in the week revealed that sales were way down and that the sellers were going to have trouble just breaking even. I helped their cause by buying my share of “tchotchke” for both my wife and daughters as well as the staff in the Synod office who weren’t in St. Louis. I just hope the fragile items survive the trip home. Regardless if they survive or not, the memories made during these six days at my first General Assembly will never be fractured.