Kibben at the helm for U.S. Navy Chaplains

Margaret Grun Kibben knew as an eighth-grader what she wanted to do with the rest of her life.

“I watched him (her youth pastor at the time, Blair Monie) and really enjoyed what he brought, and I felt a very strong call to be a minister,” Kibben recalled. 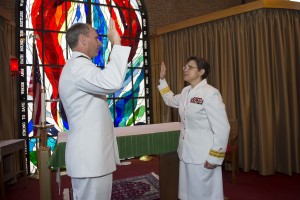 (Peter D. Lawlor/U.S. Navy)
Chief of Naval Operations Adm. Jonathan Greenert gives Rear Adm. Margaret Kibben the oath of office and promotes her to the rank of rear admiral upper half at the Washington Navy Yard Chapel in August.

That was roughly 40 years ago. Since then, Kibben has pursued a unique path to ministry as a Navy chaplain. She is currently the 26th Chief of Chaplains for the United States Navy Chaplain Corps, a position she assumed in August when she became the first woman to hold the position. It’s the culmination of 29 years of active duty service in the Navy, which includes an eight-month tour of duty in Afghanistan.

It’s also a dream come true for Kibben, and she is certainly getting the most out of this extraordinary opportunity for ministry.

“Chaplains are where it matters, when it matters, with what matters,” she said. “Chaplains have a unique opportunity to help our people (Sailors, Marines, Coast Guardsmen and families) gain a sense of who they are spiritually and to help them find their voice of faith. Nobody else has that responsibility. It’s a real privilege as chaplains to be able to walk alongside these men and women, young and old, as they’re going through the challenges that life throws at them, as they’re experiencing so many different aspects of life that we would rarely encounter in a parish. Chaplains have the opportunity to walk alongside these men and women and help them to recognize what their moral, ethical and faith foundation really provides them.”

The U.S. Navy Chaplain Corps has nearly 800 active-duty chaplains and over 200 in the reserves, all of whom hold different ranks based on responsibility and leadership. Kibben’s job is to oversee the more than 1,000 chaplains who are stationed around the world supporting Sailors, Marines, Coast Guardsmen and their families. 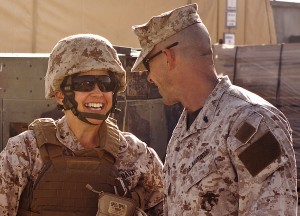 While chaplains do their share of ministering and providing spiritual guidance to those of their own faith group, they also do plenty more. Among their duties is to facilitate, meaning that chaplains help those outside their faith group who are seeking to connect with their specific religion by working with other chaplains, lay leaders and clergy.

Two other things chaplains are responsible for are care and advisement. “Care” involves interacting with the Sailors, Marines, Coast Guardsmen and leaders and listening to their concerns. Chaplains provide them a completely confidential setting to share these concerns. “Advisement” means the chaplains make commanders aware of issues that may be surfacing without their knowledge in the hopes of correcting those things to improve morale and unit cohesion.

“Preaching a sermon is only about 5 percent of what we do,” Kibben said of the chaplains. “Our range of experience includes shipboard to training institutions to deploying with the Marines to joint tours.”

One of her most rewarding experiences was the time she spent in Afghanistan a few years ago when she was the senior chaplain there, supervising the delivery of religious ministry to the troops.

“It was everything I had trained for, hoped for, expected it to be as a chaplain,” Kibben said. “It was the opportunity to be eating, sleeping and breathing and enduring the same things that my parishioners, if you will, were eating, sleeping, breathing and enduring. It really was a frontline of faith, an opportunity for people to really have a sense of the transcendent in their presence – to be an instrument of God’s presence in their midst in the worst of some of their experiences. Absolutely remarkable.”

Kibben’s father, Bill Grun, who is a well-known member of the Presbytery of Philadelphia, served during World War II, and it was his experiences that helped pave the way for Kibben’s career in the Navy.

“The whole idea of military service was very intriguing, and it became very clear to me the summer before my senior year in high school that I was called to military chaplaincy,” she recalled. “I went to college knowing I wanted to be a Navy chaplain.”

Along the way to her current role as Chief of Navy Chaplains, Kibben also became the first woman to be named rear admiral (upper half) in the Chaplain Corps. The fact that she is the first woman in that position – which is similar to that of a major general — and to be promoted to Chief of Navy Chaplains, though significant, is not an issue for Kibben. 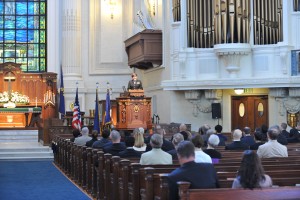 “From my parents on, when I felt a call to ministry, there was never a question about being female,” she said. “It was, ‘If that’s what you’re called to do, then you should do that.’ And frankly no one has ever told me ‘no.’ For me personally, as a woman, it’s not a big deal. It’s what I’ve been called to do. One of the things I’ve come to terms with is that you know I’m a woman, I know I’m a woman, but the job doesn’t. And the job needs to get done.

“I would be blind if I didn’t realize that other people have not enjoyed that same level of support. And I recognize that because my abilities were recognized, that’s how I’ve been able to succeed. But other folks have not had that sense of appreciation for what they bring to the table. If my being here enables someone else to think they can do it, they can answer the call as it was given to them, that they can overcome whatever obstacles were put there … If I can model for them what can be for them, then that’s a very exciting thing.”

Kibben graduated from Goucher College in Towson, Md., and from the Princeton Theological Seminary before entering active duty in the U.S. Navy in 1986. She was part of the President’s Helicopter Squadron during Ronald Reagan’s second term and has received the Legion of Merit with one gold star, the Bronze Star, Meritorious Service Medal with two gold stars, and the Navy Commendation Medal with two gold stars. Aside from Afghanistan, Kibben has also been deployed to Turkey and Norway.

Kibben has another three years in her position to continue to lead and be an example in the Navy. She hasn’t given much thought to what lies beyond that, she’s just focused on the here and now.

“My goal is to execute the job well, to do what the Navy, Marine Corps and the Coast Guard need,” Kibben said, “to do what the chaplains across the board need and more importantly what the Sailors, Marines and Coast Guardsmen need with respect to the delivery of religious ministry and to provide the leadership to make that happen.”

Note: If you’re interested in learning more about becoming a Navy chaplain, visit:http://www.navy.com/careers/chaplain-support/chaplain.html or http://chaplaincorps.navylive.dodlive.mil/.