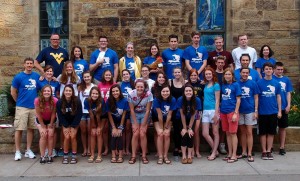 The group of 42 from Sewickley Presbyterian Church gathers before departing for West Virginia, a trip that came about after a last-minute change derailed the church’s original trip to Haiti.

Ever put everything you had into something only to have it fall apart in the end? Remember the disappointment in not being able to accomplish something you had your heart set on for a long time?

That was the feeling on a June morning in Sewickley, PA, for 42 people who had their dreams of a trip to Latin America crushed by an unforeseen circumstance. However, the group did end up south – about two-plus hours by car, not three-plus by plane as it hoped – for a mission trip that wound up having the same powerful impact the team had envisioned.

Twelve months in preparation and $50,000 in fundraising – about half of the total cost of the trip — went into the Sewickley Presbyterian Church’s plans for a mission trip to Haiti where it was going to deliver 50,000 meals, work at a pair of orphanages and build two homes. But a virus that was spreading through the area in Haiti where the group was staying eventually caused the trip to be cancelled at the last minute (literally), forcing a change in plans that rerouted the team to West Virginia for what ended up being a similarly-fulfilling experience.

The trip was scheduled for June 18-27 during which time volunteering at two Haitian orphanages – Ebac and Idede – was scheduled and two multi-family homes were to be constructed in the same village by the group from Sewickley. The load of tools, building materials and housewares were being flown to Haiti in advance along with some 50,000 individual meals that had been collected and that were to be distributed there.

“We knew very little about Haiti at the time, and during this process the whole church had sort of been growing together in this support of Haiti,” recalled the Rev. Russ Mowry, associate pastor for Youth and Family Ministry at Sewickley. “We used our dining room to build 50,000 meals in a big Meal Build Day. The total cost of the trip was over $100,000. It was a big deal.” 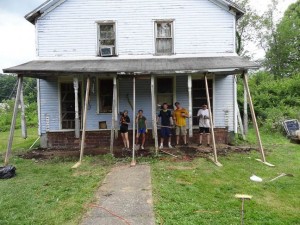 Even though work was planned in Haiti, there was plenty of good will done in Buckhannon, WV, in June.

Plans became finalized and excitement grew as June 18 drew closer. About six months before the departure, word trickled back to Sewickley PC that there was a virus called “chikungunya” in Haiti that was causing some problems there, but it really didn’t create a whole lot of concern for the 42 people – made up of nine adults and 33 students – from the congregation who were heading south.

“It seemed unfortunate and it seemed very unpleasant, but it didn’t seem like it was gonna do much,” Mowry said. “You’d ache for a few days; it’s not deadly, you just deal with it. We figured, ‘You know, you have a chance, when you go to Haiti, of getting malaria, dengue, a lot of other things. It’s just one of the risks that we take as Christians doing mission.’”

As the weeks and days approached, everything seemed to be a go. There wasn’t much new news about the sickness, so it wasn’t a concern for the group. But at 10 p.m. on the night before the group was departing for Haiti, Mowry was informed that the virus was now spreading quickly.

“Three of the four contacts (in Haiti) had come back to the states because they had gotten sick the last two days or so,” Mowry said, recalling the message. “(I was told) that if we decide to go, expect that half of your students will get sick. It went from maybe five of us getting sick to half of us.”

Emails and phone calls immediately went out to the families who were planning to take the trip to Haiti the next day, alerting them to the wave of sickness that was enveloping Haiti. Options were given for them back out if they wished.

Five hours later at roughly 3 a.m., another phone call came saying that the virus was continuing to spread at a high rate and that the consequences for visitors were getting increasingly worse. 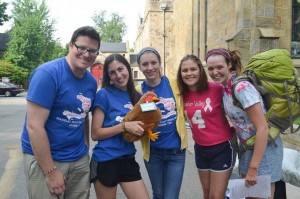 Even though work was planned in Haiti, there was plenty of good will done in Buckhannon, WV, in June.

“The people that were going to host us are sick,” Mowry said. The message continued to say, “Everybody in the village is sick. Everybody whose homes we were building were sick. And if you go, everybody should expect to get sick.”

An emergency meeting was then called for 7:30 a.m. – roughly 4 ½ hours before the group was planning to leave for the airport.

“All the leaders came, and we just sat in a room and prayed,” Mowry said. “We talked about it, made decisions. For a couple of hours, we agonized over this. It was strange. It was one of the most painful meetings I’ve had but also one of the most spirit-filled.”

Eventually a vote was cast by the people in the room, and by a 6-3 vote, it was agreed that that mission trip should continue. Time and effort and money had been put forth by many people to make this life-changing trip to Haiti, and the majority of the people at the meeting felt like those efforts shouldn’t be wasted.

So the leaders left the room to make phone calls to the group to let them know the situation and that after careful deliberation the mission trip was still on. Then something amazing happened.

“As soon as we walked out and started to call, probably three people, including myself, are sort of stopped in their tracks and it became very obvious that it was a bad decision,” said Mowry, who had voted in favor of going. “We literally walked out of the room and stopped and said there is no way we can do this. … It was a spirit moment. 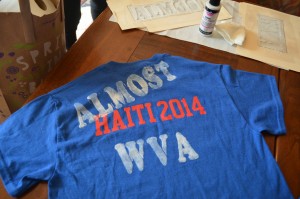 This T-shirt says it all.

Phone calls were made to the group to meet in the church sanctuary at 10:30 a.m. to discuss the decision that was made. Mowry said it was explained that it was no longer a risk that people going to Haiti would get sick, “it was an assurance.”

“It was no longer rolling the dice,” Mowry continued. “We are essentially bringing you into this place where you are going to get sick.”

While chikungunya, which translates to “that which bends up,” was not life-threatening, it was fairly severe. It causes high fever, rashes and affects the joints of those infected.

“It’s supposed to last anywhere from a week to six months,” Mowry explained. “We thought how much is a risk for the Kingdom? What’s that level? What’s that line that we draw?”

A lengthy discussion ensued in the sanctuary among the church leaders and the mission team. When it was agreed that a trip to Haiti was not in the cards, a conversation arose regarding a family mission trip to West Virginia that was being looked at for 2015. A call was made to the organization to see if it would accept a large group of 42 from Sewickley on very short notice.

“They said, ‘You know what? We don’t have anybody for that time and we’ve actually been praying for somebody to fill this spot,’” Mowry said. “’All of June has been empty for us and we have a lot of people waiting for help. This is a God-send, actually.’”

It was a unanimous vote by the 42 members of the mission team to head to West Virginia. So in a matter of three or four days, a trip was planned and carried out by Sewickley PC.

“That meeting was really good,” Mowry said. “There were a lot of tears, a lot of frustration, but not a single person, not a single parent said we should have gone. 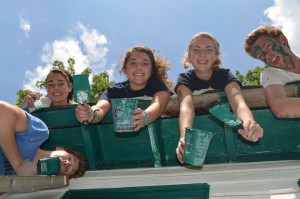 Despite missing out on a trip to Haiti, the mission team from Sewickley PC had no problem getting into their work in Buckhannon, WV.

“People actually bonded over being so upset about this (not going to Haiti). We’ve been hyping it up for so long, we did so much work, we raised so much money and then it turns out we’re going to West Virginia. We sort of bonded over that. People who didn’t usually get along got along, they were united over this terrible thing that had happened and the decision we made.”

Another spiritual moment arose when the team stopped to eat in West Virginia. Mowry saw several of his students getting high-fives from a man and quickly went over to investigate. The man said, “Hey, you’re wearing my shirt.” Mowry looked down and realized everyone was wearing the shirts they had designed for their trip to Haiti.

The man went on to say that he was working in West Virginia and was sending his money back to his family in Haiti. Mowry then explained how his group had plans to go to Haiti but had to cancel because of the sickness.

“The next thing he said was, ‘You know, West Virginia needs your help, too,’” Mowry said. “I said, ‘Alright God, you got me.’ It was a big wake-up moment and it was so true. People do need our help.”

West Virginia – specifically the town of Buckhannon — did benefit from work done by Sewickley PC. They built ramps and decks for houses there and worked on plumbing and flooring projects, among other things. The Haitians also came out on top, too, because the 50,000 meals and building materials were still shipped. The two homes were built and food delivered, just not by the bunch from Sewickley.

“A lot of people say everything happens for a reason,” Mowry said. “I don’t necessarily think that. What I do think is that nothing is beyond redemption. Though things in nature happen, though catastrophes happen, though people do bad things, any situation can be redeemed. I think it would have been easy to say, ‘Gosh, this trip didn’t happen. God didn’t want us to be there.’ Or we could approach it like ‘This trip didn’t happen, what can God do starting right now? How can God redeem this experience?’ And he did.

“We really did come together. So with all of this mourning and chaos and everything that happened, we really bonded together. I think God really brought us together as a crew to say ‘No matter where you’re going, you’re doing my work and you’re doing what’s important and you’re showing Christ’s love to the world.’”