And the winner is…

And the winner is… 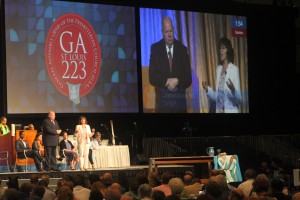 The much-anticipated moderators’ election took center stage Saturday, with three moderator/co-moderator teams up for the two-year commitment. The Synod’s treasurer, Chantal Atnip, was the lone moderator standing, leading a team that also included vice moderator Ken Hockenberry from the Presbytery of Chicago. The other two teams were both co-moderator duos. After opening statements and 45 minutes of fielding questions from the GA commissioners who had assembled, it took four votes for one team to earn 51 percent of the over 520 votes that were cast. When all was said and done, it was Vilmarie Cintrón-Olivieri (Presbytery of Tropical Florida) and Cindy Kohlmann (Presbytery of Boston) who walked away with the distinction of being the moderators for the 223rd General Assembly.

While Chantal and Ken were obviously disappointed in the results, they were also equally thrilled by the support they received throughout this journey. Both can reflect fondly on the hard work that went into such a campaign and were quick to congratulate the other two moderator teams on their efforts during this lengthy and sometimes stressful process.

My Saturday at GA began with a second meet-and-greet for the moderator teams on the second floor of the America’s Center. There wasn’t nearly as many people wondering about this morning, since many of those who were in town had taken the opportunity Friday night to shake hands with the candidates. I took the low-key morning to make my way into the Exhibit Hall where it feels like a hundred stands are set up with a willing face excited to share about their organization. Everything from Presbyterian colleges to foundations to Middle Eastern craftsmen selling everything from jewelry to cashmere scarves to carved wood have stands set up to make you aware of who they are and what they do. 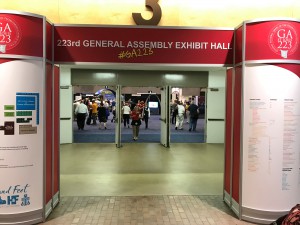 Of course, the big attraction of the Exhibit Hall is the swag that can be accumulated. I did not come prepared with a bag, but fortunately Monmouth College was right inside the door and giving out bags, so I was saved the embarrassment of looking like a chipmunk with my pockets full of swag. Most stands have pens and buttons, with the best pens coming from the Presbyterian Foundation (with smart phone stylus tips) and Presbyterian Theological Education Fund (with flashlight). Union Presbyterian Seminary handed out electronic device charger cords, the Board of Pensions was giving out smart-phone Popsockets and the 2019 Presbyterian Youth Triennium had bowls of mini purses available.

The best stand I found was from the Presbytery of the Grand Canyon that had available prayer bundles – little pieces of cloth that have prayer requests inside for the Native American reservations in their area. They also gave out strings of beads and an ornate shoe on a key ring. Fourth Presbyterian Church in Chicago had youth talking about their “Urban Youth Mission: Chicago” initiative that houses youth groups for mission trips, then schedules inner-city work projects for those teams to be involved in. Everybody had a great message to share, and it was well worth the time spent, with or without the swag. 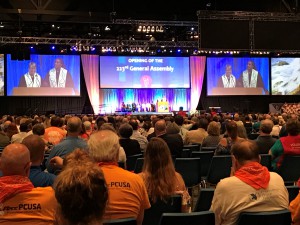 Opening worship of the 223rd General Assembly featured goodbyes from the PCUSA’s outgoing co-moderator team of Jan Edmiston and Denise Anderson, who delivered a co-sermon with alternating statements. Stated Clerk J. Herbert Nelson called for the offering, which will go toward bail for those incarcerated for minor offenses who cannot afford to pay their fine. On Tuesday, a “Hands and Feet” march will be held that will feature a sea of Presbyterians walking the offering from the convention center to the debtors’ prison. Should be an incredible scene.

Lunch was spent listening to one last round of moderator talks at the Presbyterian Outlook Luncheon. Co-moderator hopeful Eliana Maxim said it best when she said that regardless of who wins, the PCUSA will be getting a great moderator team. Outlook editor Jill Duffield expressed her excitement over the magazine’s upcoming 200th birthday, which will occur in 2019. The room included a virtual who’s who of former Outlook editors, current and former co-moderators and the current PCUSA stated clerk.

The afternoon plenary (a “meeting of all participants”) included a lengthy training session for the GA commissioners. Young Adult Volunteers provided much of the scripted training and used humor to make it a fun experience for the newbies. The first voting test revealed that 51.4 percent of GA commissioners believe that Star Wars is better than Star Trek. Sponge Bob also made an appearance during the training.