Crestfield Camp and Conference Center has named the Rev. Dr. J. Bruce Byers to serve as its temporary executive administrator during the transition between executive directors. His service began on Feb. 21. Bruce is a PC(USA) pastor of over 40 years and has served four PC(USA) churches and two national non-profit corporations. 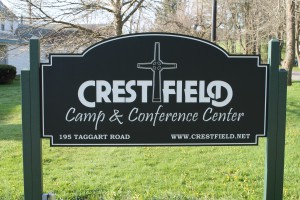 Bruce earned his Ph.D. from the University of St. Andrews in St. Andrews, Scotland, in 1988 and his Certified Fund Raising Executive certification in 1999. Most recently, he served as the Transitional Pastor at the Aspinwall Presbyterian Church.

Bruce is filling the void left behind by the Rev. Betty Angelini, the camp’s former executive director who has accepted a new call as the executive director of Living River: A Retreat Center on the Cahaba in Birmingham, AL, on Feb. 24. Betty’s final day at Crestfield was Feb. 20. A tribute to Betty was written in the camp’s March 15 newsletter. It reads:

“Betty was special and unique and of great heart. She loved those with whom she served as much as she loved those whom she served. Nurse Betty will be long remembered for her gentle kindness by the young people who attended the summer camping events and programs at Crestfield. The fundraising campaign she led to enhance and forward the mission and ministry of Crestfield raised over $2,000,000. What she accomplished at Crestfield in her 12 1/2 years of service was nothing less than miraculous.

“By serving the Lord with great love and with God’s blessing, as the future comes, Betty has positioned Crestfield to become something very special. It was hard saying good-bye. She was honored at the meeting of Pittsburgh Presbytery on Feb. 16 and Betty’s Last Supper, so named by the staff at Crestfield, was held on Feb. 20. Tears and celebration co-mingled in her leave taking. She will be missed. As we move forward, let’s take the wonderful gift of Crestfield and move it along toward the future God has in store.”