Getting my steps in 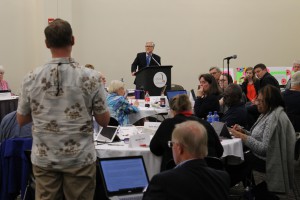 Things really got moving Monday at General Assembly. For me, that’s a literal statement. Today was the first day in which all 14 committees met to discuss the overtures that had been placed in front of them. Some committees met Sunday night, but all 14 were in action today.

Overture committees are made up of the GA commissioners who have been designated from the presbyteries around the country. Since the Synod of the Trinity has 16 presbyteries and probably close to 80 commissioners in St. Louis from within its bounds, there is someone (and usually multiple people) from our Synod in every committee. Committees are broken down into different areas of focus, from General Assembly Procedures to Environmental Issues to Middle East Issues. The committees look over the overtures brought before them and make recommendations to the General Assembly on whether to approve or disapprove. The committees can also make amendments to the overtures, which can turn a discussion on an overture into a lengthy process.

With five overtures at this year’s General Assembly coming from presbyteries in the Synod of the Trinity, not to mention the six commissioner resolutions from our region that are prepared just prior to GA, it takes a good map, sturdy shoes and bottles of water to be able to keep up. All told, eight of the 11 overtures/resolutions coming from the Synod were discussed today. Fortunately, they were all on the second floor of the America’s Center. Unfortunately, the America’s Center is a big place. 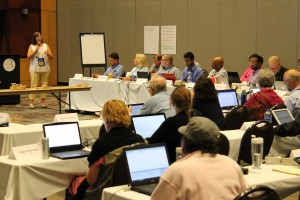 Sue Washburn of the Presbytery of Redstone addresses the Social Justice Committee.

With some things coming to the floor ahead of schedule and others delayed, it made for some hectic moments as I tried to catch at least a part of everyone’s presentation. I was able to sit down (and catch a breath) at five of the eight that were discussed today (one I arrived a half hour early and it had been moved up on the docket, so I was actually 30 minutes late).

Here’s a brief recap of what happened (most of which I saw) today, in chronological order: 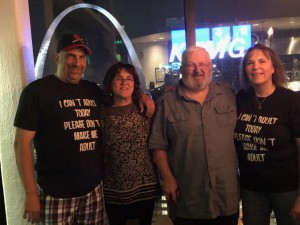 Synod staffers pose for a photo in the “Three Sixty” rooftop restaurant with the St. Louis Arch as the backdrop.

The evening was spent enjoying downtown St. Louis, with the four Synod staffers partaking of dessert at the “Three Sixty,” a restaurant on the rooftop of the Hilton hotel. Located triangularly from the St. Louis Arch and Busch Stadium, the skyline on this clear night was breathtaking. A stroll to the Arch was necessary afterwards, not only for the view but also to walk off the calories. Yeah, more steps…